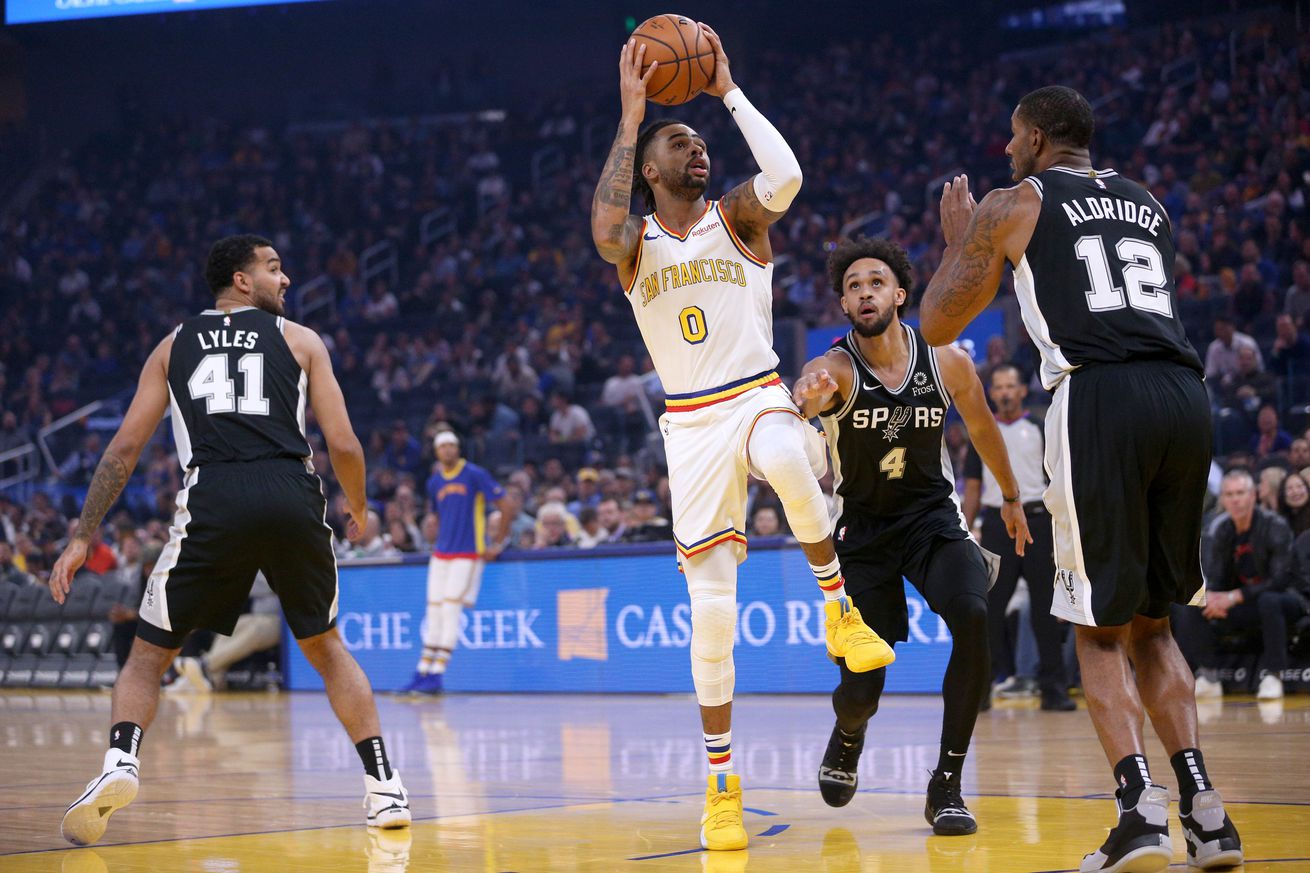 The Spurs bench dominates scoring and puts away the game in the fourth quarter.

The depleted Warriors put up a good fight for three quarters, as D’Angelo Russell led the team in scoring and aggressiveness. But the Spurs had more weapons, and with a bounce back game from LaMarcus Aldridge and a 31 point scoring explosion from Patty Mills, the Spurs kept pounding the rock, and finally late in the game the rock cracked and they cruised to an easy win.

The Spurs started slowly, and Draymond Green scored the first points of the game on a three-point push shot. Aldridge, cleaning up the garbage around the rim, scored the first 4 points for the Silver and Black, and with a deep three from Derrick White, it was tied at 7.

The Warriors were led by D’Angelo Russell and played the Spurs pretty even for most of the quarter, but clutch shooting from Patty Mills and the bench game had the Spurs leading 29-28 after the first 12 minutes.

Rudy Gay and Patty Mills led the Spurs to a quick six point lead with ball movement and shooting. The energy of the Spurs allowed them to score at will, but the Warriors hit a lot of tough shots and kept pace with them for most of the quarter. As the halftime break loomed, the Spurs shooting went cold and the Warriors tied it up at 55 on a D’Angelo Russell triple with under a minute left. A pair of free throws from DeMar DeRozan gave the Spurs a two point lead at half.

Willie Cauley-Stein’s wraparound dunk tied up the game to start the second half, but LaMarcus Aldridge began to heat up after hitting free throws and scored 8 points in the first three minutes of the quarter. The Spurs built a lead on solid play with Forbes hitting shots, but they also gave the Warriors bigs some unimpeded runs to the hoop for easy dunks, which kept them from extending the lead into double digits, until Bryn Forbes got loose to hit a deep triple halfway through the third. The momentum swung back as the Warriors picked up their defensive intensity, and got a breakaway dunk on a botched jump ball play by the Spurs, cutting the lead to just 4. The Spurs went on a run to extend their lead to 15, but defensive breakdowns gave Alec Burks a wide open look from beyond the arc at the buzzer which he sank, and the Spurs led 97-86 after 3.

Patty Mills took control with a 4 point play to start the fourth, and Golden State started to foul the San Antonio shooters. The Spurs led by 20 with 8 minutes left, but after leaving Jordan Poole open for a three, Pop called a timeout to talk it over. After a Golden State’s 7-0 mini-run, the Spurs took control, and Chimezie Metu, Lonnie Walker IV, Drew Eubanks and the end of the bench got some run as the Spurs cruised in garbage time.

For the Warriors fan’s perspective, head over to Golden State of Mind.

The Spurs are 4-1 on the season and are tied for the lead in the Western Conference with the Jazz and the Lakers. The Spurs will return home to face the LeBron James and the Los Angeles Lakers on Sunday at 6:00 pm in the AT&T Center.