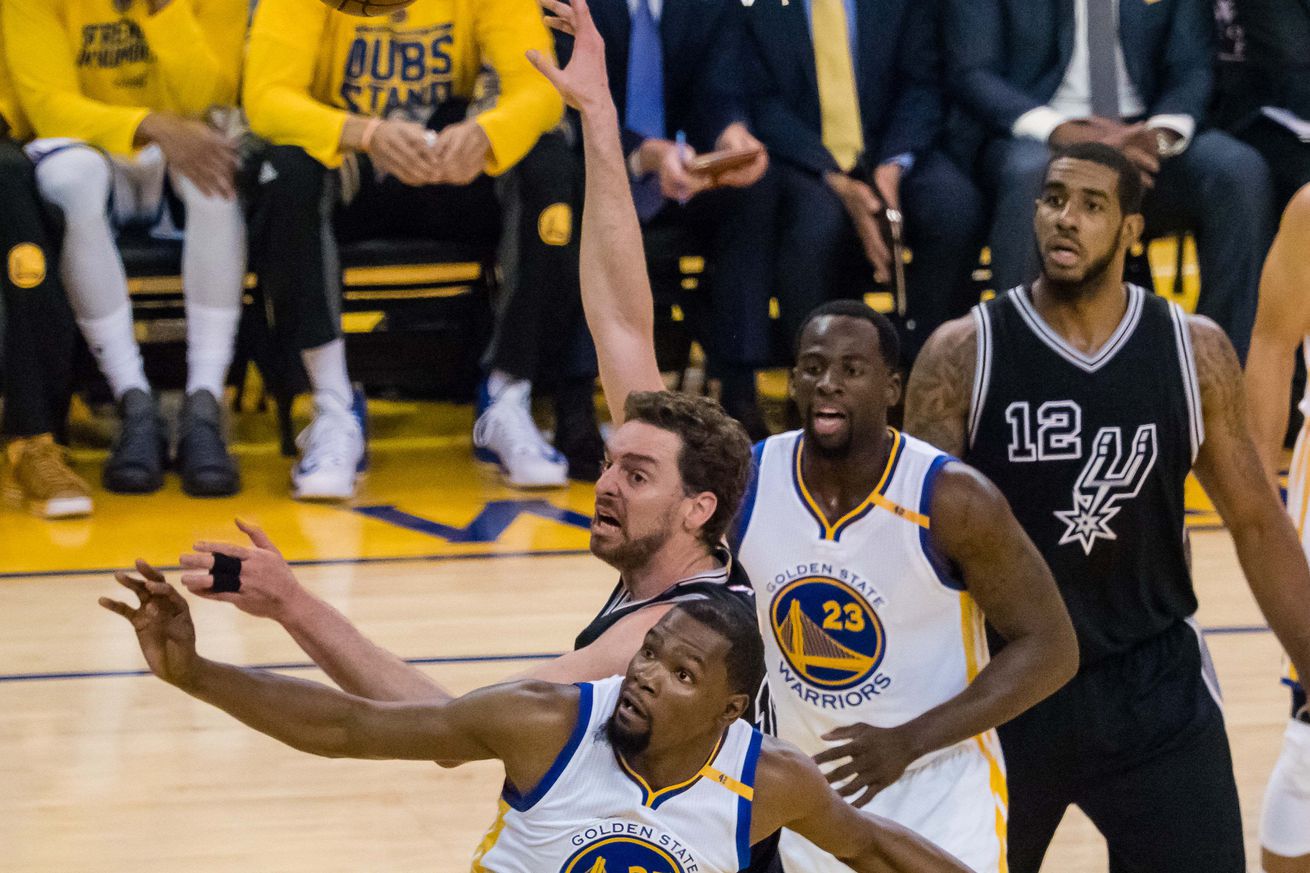 The Spurs, without Kawhi Leonard, didn’t have the energy to keep up with a hot shooting Warriors team led by Steph Curry as they routed the lifeless Spurs.

The Spurs were missing their best player, but more than that, they played without heart in a blowout loss to a Warriors team that was firing on all cylinders and couldn’t miss a shot as they were run out of the arena in Oakland tonight. It was LaMarcus Aldridge’s time to step up as the best player on the Spurs roster, and he didn’t answer the call as he played his worst game of the playoffs. Jonathon Simmons had a solid game for the Silver and Black but he couldn’t carry the team by himself.

Meanwhile, everyone on the Warriors team was hitting their shots and the game wasn’t a contest early as the Warriors led by 30 in the second quarter. It wasn’t just the stars contributing for Golden State, although Steph Curry did his part, they also got superior contributions from their bench, even with the absence of Andre Iguodala, out with knee soreness. By the fourth quarter, it was a blowout, but Spurs fans still could appreciate the fact that end of the bench players were able to get some playoff experience and show their talent.

The Spurs started the game with a lineup of Patty Mills, Jonathon Simmons, Pau Gasol, LaMarcus Aldridge and Danny Green The Warriors rushed out to a quick 5-0 lead with baskets from Kevin Durant and Draymond Green. Simmons hit a few baskets to keep the Spurs in the game but the pressure of the Warriors led to turnovers and open shots and after a Curry three, the Warriors led 14-6. Dedmon got some early floor time, while LaMarcus didn’t have a great start and the Warriors lead swelled to 12 midway through the quarter. The deep bench for the Spurs got some run late in the quarter, but the Warrior ball movement continued to get open shots for Steph Curry, who sank them to give the Warriors a 25-13 lead at 3 minutes left in the quarter. The Warriors continued to pour it on, and with the continued cold shooting from the Spurs, the score was 33-16 after 12 minutes.

David West made some terrific plays on both ends of the floor for the Warriors to extend the lead to 20 for the Blue and Gold. The Spurs continued to be unable to throw the rock into the ocean, and the lead continued to swell … to 25 points in the first four minutes of the quarter. Once again, Simmons provided the juice to keep the Spurs involved, but the Warriors bench of Ian Clark and Patrick McCaw matched the Spurs hustle and kept the margin up for the Warriors. The Spurs defense began to crack and the Warriors hit every single thing they looked at the it was starting to get out of control late in the quarter. Only a late bucket from Dejounte Murray kept the Warriors from being up 30 after a half. The score at half was 72-44, bad guys.

The Spurs started the second half with much better energy and focus and began to slice into the lead, despite still having trouble hitting shots. But they were fighting now, and Mike Brown needed a timeout to rally his troop when the Spurs cut the margin to 22 with 7 minutes left in the third. The Warriors, as they do, started to get hot shooting, and pushed the lead back to 27 with 5 minutes left in the third. It got worse for the Spurs as the deficit continued to grow, up to 33 points. After three, the Warriors had a 106-75 lead.

The fourth quarter was extended garbage time, but the Warriors continued to dominate, with Joel Anthony getting extended minutes and playing well. The starters for the Warriors were all on the bench except for Klay Thompson, who was apparently being punished for being the only guy who wasn’t shooting lights out for the Warriors. The Warrior bench continued to pour it on, and the game ended with the Warriors just barely pulling out a narrow win: 136-100.

Without their best player, the Spurs looked lifeless and mediocre. If the Spurs continue to play like this, it’s the end.

The Warriors lead the series 2-0 with the Spurs returning to San Antonio for Game Three. The good guys get a nice break between games before the Saturday night game in the AT&T Center at 8:00 PM. It’s not guaranteed that Kawhi Leonard will be healthy enough to play then, and if he isn’t it’s going to be another rough day for the Silver and Black.