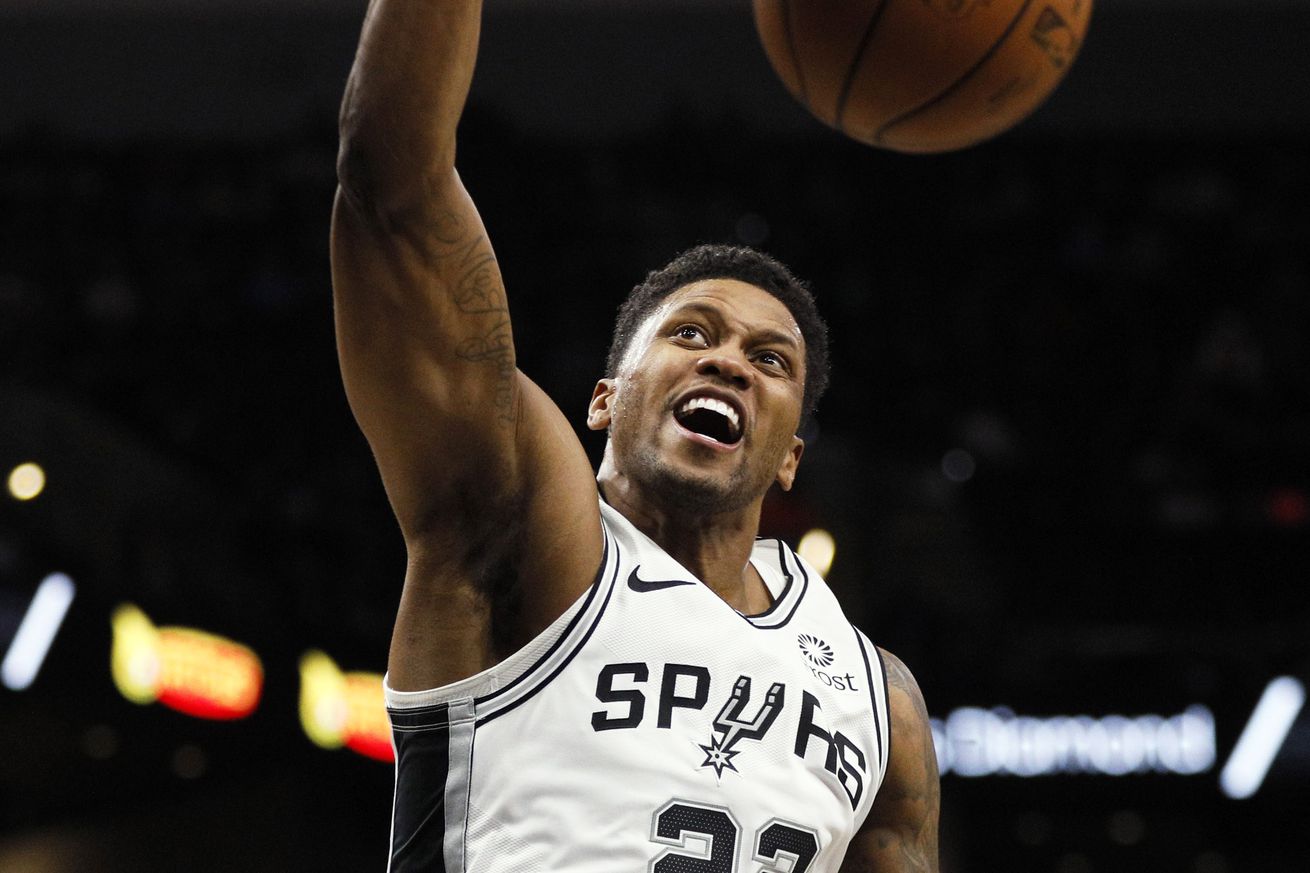 With stellar play on both ends, Gay has been a huge boost for the Spurs.

In another blowout first half, the Spurs disrupted the 76ers’ rhythm while establishing their own. With timely help defense built on good communication and a growing sense of intuition, the Spurs held the 76ers to 48 points over the first two quarters, with just 17 in the 2nd, and built an 11 point lead going into halftime. Rudy Gay was in the thick of it all.

He’s become perhaps their most versatile defender and also maybe their best. He has the highest D-PIPM (Defensive Player Impact Plus-Minus) on the team, and behind Pau Gasol, who’s only played 9 games, the 2nd highest DRPM (Defensive Real Plus-Minus). He’s 3rd on the team in blocks, and 2nd in both steals and deflections. Without Dejounte Murray around, he’s also the best at exploiting those defensive contributions on the other end of the floor, sometimes in spectacular fashion. Not coincidentally, he leads the team with 13 dunks so far this season.

As the first half wound to a close, Rudy showed all of that in one series.

Rudy’s in trail position as Ben Simmons cuts from the free throw line over a Joel Embiid screen out to the left wing. Simmons catches and immediately heads for the paint, but LaMarcus Aldridge has dropped down to pick him up. That leaves Embiid momentarily open, but Rudy and Davis Bertans immediately collapse on him, and Rudy’s active hands knock the ball loose.

Rudy beats Embiid to the ball and takes off in transition. That little bit of ball-handling is what made the dunk possible. Take a look at where Jimmy Butler is when Rudy gets to the ball.

He’s essentially even with Rudy. If Rudy turns and secures the ball before taking off, Butler gets a half step on him, and is probably able to cut off his lane to the rim. As it is, though, Butler’s just in time to take a freshly dunked ball off the back of his head.

We also need to commend Jakob Poeltl here for beating Drew Eubanks off the bench in celebration. It’s close, but Drew doesn’t often get bested in the bench mob hype routine category, so shout out to the big Austrian for bringing his A-game.

After trading bricks and buckets for a few minutes to open the 2nd half, the Spurs broke the game open for good in the middle of the third thanks to a 23-5 run. The deluge of points featured a lot of individual excellence and some nice passing. The Spurs’ Mid-3 scored or assisted on each of the team’s points in that span.

DeMar had 7 assists on the night, and it should’ve been more. Right at the beginning of that run, Rudy clanked a wide open look off a pretty interesting Hammer action.

This is the Spurs’ pick and roll with the strong side corner empty, with a shooter setting the screen instead of a big. Ben Simmons hangs in the paint to deter DeMar’s drive while Wilson Chandler recovers and JJ Redick stays on Bryn Forbes. LaMarcus’ screen takes Embiid out of the play, and Rudy gets a wide open look.

This is a great way to punish a team for pre-rotating to defend the empty strong side pick-and-roll. Like a typical setup for the Hammer, once the defense gets sucked in, there’s essentially nothing they can do but hope it’s a miss. That works out in this case, but Rudy will knock this shot down far more often than not.

It’s remarkable how fast this type of play-making from DeMar has become the norm. Last season, the team only produced 18 individual games of 7 or more assists, but DeMar’s already done it 13 times in just 31 games. Of course, he doesn’t get an assist unless his teammates knock down their shots, so a lot of that has to do with the outstanding play of Rudy and LaMarcus. Though each can dominate in stretches, when all three have it going, the game looks easy, and this win was a good example of that.