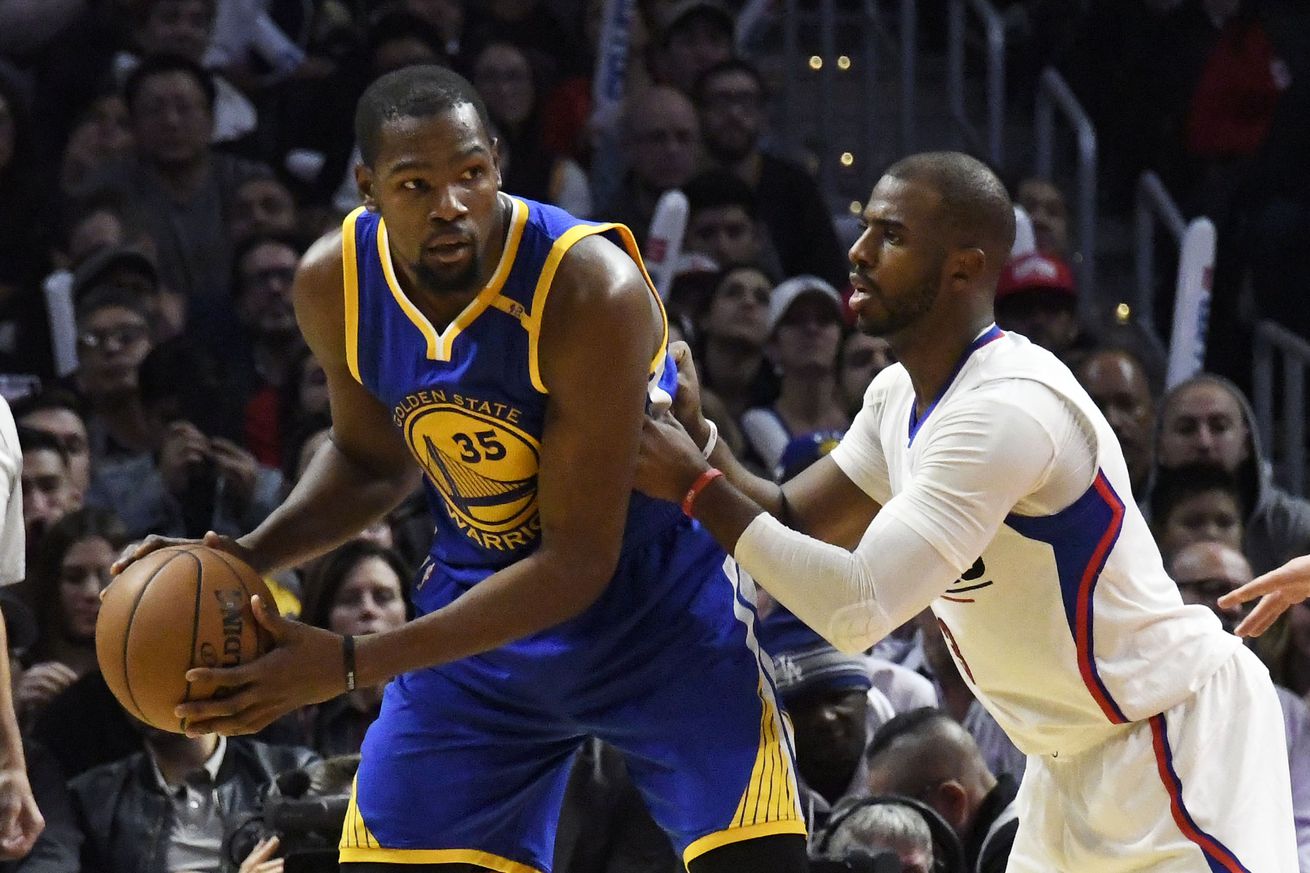 Two of the league’s biggest stars have now found success in changing teams to chase greatness. Could that affect what happens this summer?

The NBA Finals feel like a foregone conclusion and people can’t stop bringing up Chris Paul potentially coming to the Spurs. What do the two stories have in common, aside from a slow NBA news cycle? Rings, and the lengths a player may go to get one.

In a move that will be at least somewhat vindicated with an NBA title, Kevin Durant spurned the Thunder last summer to join the team that had just eliminated him from the playoffs. He had been a certifiable superstar for years — an MVP and two-time scoring champ — but the futility of his postseason runs at OKC was always going to be an L-shaped scarlet letter. So KD took a ponderous walk through a hedge maze and launched a storm of memes by starting His Next Chapter in the Bay Area.

And like LeBron with his Decision, the outrage over Durant joining the enemy will soften over time while his legacy grows. Winning changes things, which is why it won’t likely be the last time that a player uses his agency to flip the script on an NBA season.

After (yes, “after”) Durant gets his chip, Paul will be the NBA’s sole target for the league’s #noringz takes — he’s a transcendent player and one of the best point guards of the post-Jordan era, but also a guy who’s never even made a Conference Finals. Rings are funny that way: they don’t guarantee greatness — just look at how many rings John Salley and Robert Horry have — but their absence puts it into doubt.

While many fans stoke the rings-or-bust narrative, the conversation is at least embracing a bit of nuance. Pieces likes this one from FiveThirtyEight’s Chris Herring note how great Paul’s been, especially in the playoffs, and Paul himself has dismissed concerns that his individual career is defined by taking a team all the way.

It may be telling that Paul says when and not if you win it, or it may not. Either way, winning it in LA seems very unlikely for the 32-year-old. The Clippers have done well to construct a perennial playoff team, but the Lob City train is running out of track. They’re asset-poor, void of cap space, and need to decide whether or not to throw hundreds of millions of dollars at Paul, J.J. Redick and Blake Griffin, who may all be in decline.

The real reason all the CP3-to-SA rumors continue is almost certainly because from Paul’s camp wants to ensure the Clippers offer him the five-year $205 million max he fought so hard for as the president of the NBPA. Even for someone who’s been on superstar salaries (plus that State Farm money), the drop-off between what LA and an outside suitor can offer is too substantial to ignore. Like Carmelo Anthony did a few years ago, Paul can stay in the big market, take the big money and it would make all kinds of sense (to me, at least).

The emerging alternative option, of course, is San Antonio, especially if the Clippers don’t want to go a full five years or are considering changing course entirely. Setting aside how feasible it may be given the Warriors’ waltz through the 2017 playoffs, a triumvirate of Paul, Kawhi Leonard and Gregg Popovich should work, and it would almost certainly be a better foundation for contending than what he has in LA.

The problem with the move is that the most realistic path for that to happen — with the Spurs forfeiting depth and mid-level talent to accommodate his near-max contract — would mean there may not be much left beyond Paul, Leonard and Pop. Therein appears another wrinkle to the Carmelo decision, whose trade to New York forced the Knicks to give up many of their most promising pieces: what’s the point in Paul chasing a championship in San Antonio if the move means him getting a near-max contract at the expense of their chances to contend? Is there a possibility of a middle ground — something along the lines of a one-plus-one deal that would allow the Spurs to retain another important piece, while giving Paul the freedom to revisit his payday next summer?

If Durant’s “100-percent-correct” move has any bearing on his own decision, if #ringz really are more important than money, then Chris Paul needs the Spurs far more than they need him. And if the desire for ultimate success does indeed push him to San Antonio, it could also affect how he comes — and for how much he signs.

Or he could just stay in LA and make a banana boat out of dollar bills.