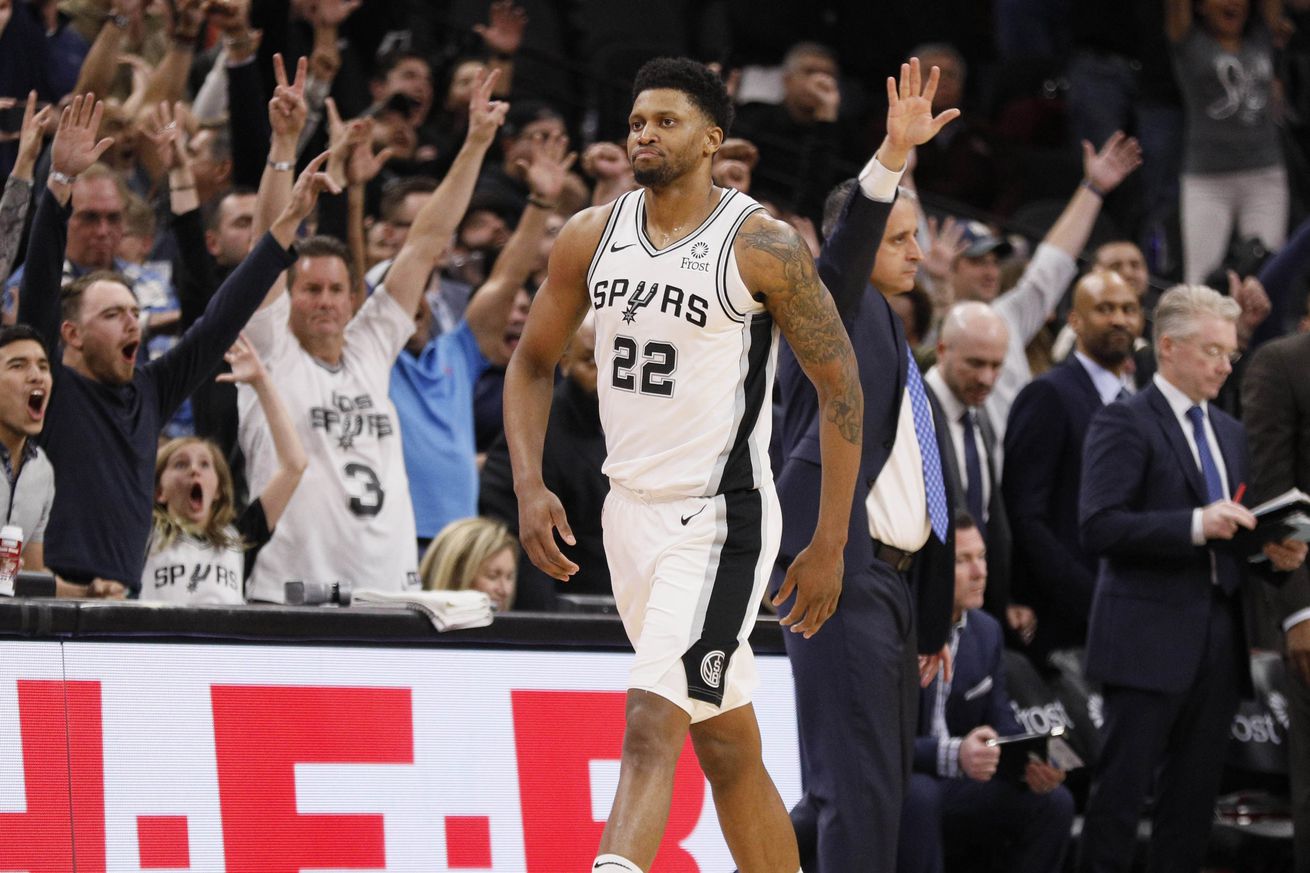 Keeping the veteran forward on a short deal will allow the Spurs to remain competitive in the West while maintaining some cap flexibility.

The Spurs and Rudy Gay have reportedly agreed on a two-year, $32 million contract, according to The Athletic’s Shams Charania. As expected, the veteran forward will be back, which is clearly good news.

Gay had a terrific 2018/19 season and emerged as a key contributor for a team that won 48 games and made the playoffs. After years of being considered mostly an empty calories scorer who had a throwback game, Gay evolved into a prototypical combo forward whose improved shooting (a career-best 40 percent from beyond the arc) allowed him to play off the ball while remaining dangerous enough as an on-ball scorer to anchor bench units. He was reasonably durable as well on his second season back from an Achilles injury, missing just 13 games and logging over 1,800 minutes. Simply put, Gay was exactly the type of player any team looking to be competitive would love to have. He was so good in fact that at one point it seemed like it would be hard for the Spurs to retain him. Fortunately it appears that wasn’t the case.

It’s tempting to focus on the dollar amount of Rudy’s new contract and feel like it might be too much for a guy that came off the bench and struggled at times in the playoffs, but this is undoubtedly a good deal for San Antonio. Regardless of whether Gay re-signed or not, the Spurs would have operated as an above the cap team, which means they would have only had the mid-level exception and/or veteran’s minimum to replace him.

With the Nuggets keeping Paul Millsap and Nikola Mirotic going back to Europe, the market for big forwards with range was shallow, which would have made it extremely difficult for the front office to find an upgrade or even someone who could offer similar production. Gay’s familiarity with both the system and his teammates also has value for a team that has faced turmoil in recent offseasons. Keeping a player who fits his style and the rest of the roster has to be comforting for Gregg Popovich.

The only real reason to be hesitant leading up to free agency about re-signing Gay had to do with the length of his new contract. Fortunately, he agreed to a two-year deal, which is ideal for the Spurs. Beyond not having to pay Gay as he firmly exits his prime, the Spurs have managed to line up the contract timelines of all their most prized veterans. DeMar DeRozan can opt out of the last year of his contract next offseason, while the last year of LaMarcus Aldridge’s deal is only partially guaranteed. If things go poorly and DeRozan leaves, the front office should be able to pivot into a full-on youth movement with ease, since Gay should be eminently movable as a solid veteran on a mid-sized, expiring contract. If the team does well and DeRozan opts in, they get to keep the team together without having any large contracts on the books past 2021, except for Patty Mills’ deal.

There will be some rumblings about how this signing prevents the Spurs from fully embracing the youth movement they’ve started, but not bringing Gay on a short deal would have been a mistake both considering the short and long term, as the team doesn’t really have a prospect ready to take on his role. Without Rudy, and assuming the front office didn’t use the mid-level exception to sign a veteran to replace him, San Antonio would have had to either give Davis Bertans 30+ minutes a game at power forward behind Aldridge or give rotation minutes to either Chimezie Metu or rookie Luka Samanic. Neither of the young guys seems ready for that kind of responsibility yet, and throwing them into the fire too early could have been more damaging to their careers than learning behind quality veterans on a team that should contend for a place in the postseason.

Now that Gay is back, it will be interesting to see what the Spurs do next. They still have the mid-level exception at their disposal and will be able to use it fully without venturing into the luxury tax. They could realistically fill their only remaining roster spot with a rotation-level player, bolstering their depth. The biggest need now seems to be an athletic big man who can play center, and there are a few names that make sense to fill that role, including Noah Vonleh and JaMychal Green, among others.

There will be time to figure out how the front office fills out the roster later. For now, fans should be happy a good player is back on a deal that is very close to ideal. Gay will make the Spurs better in 2019/20 without seriously jeopardizing the team’s cap flexibility long-term, which is a win. The signing might not be as flashy as others announced in the early hours of free agency, but is decidedly a very good one.

Re-signing Rudy Gay was the right decision for the Spurs
Source: Pounding The Rock