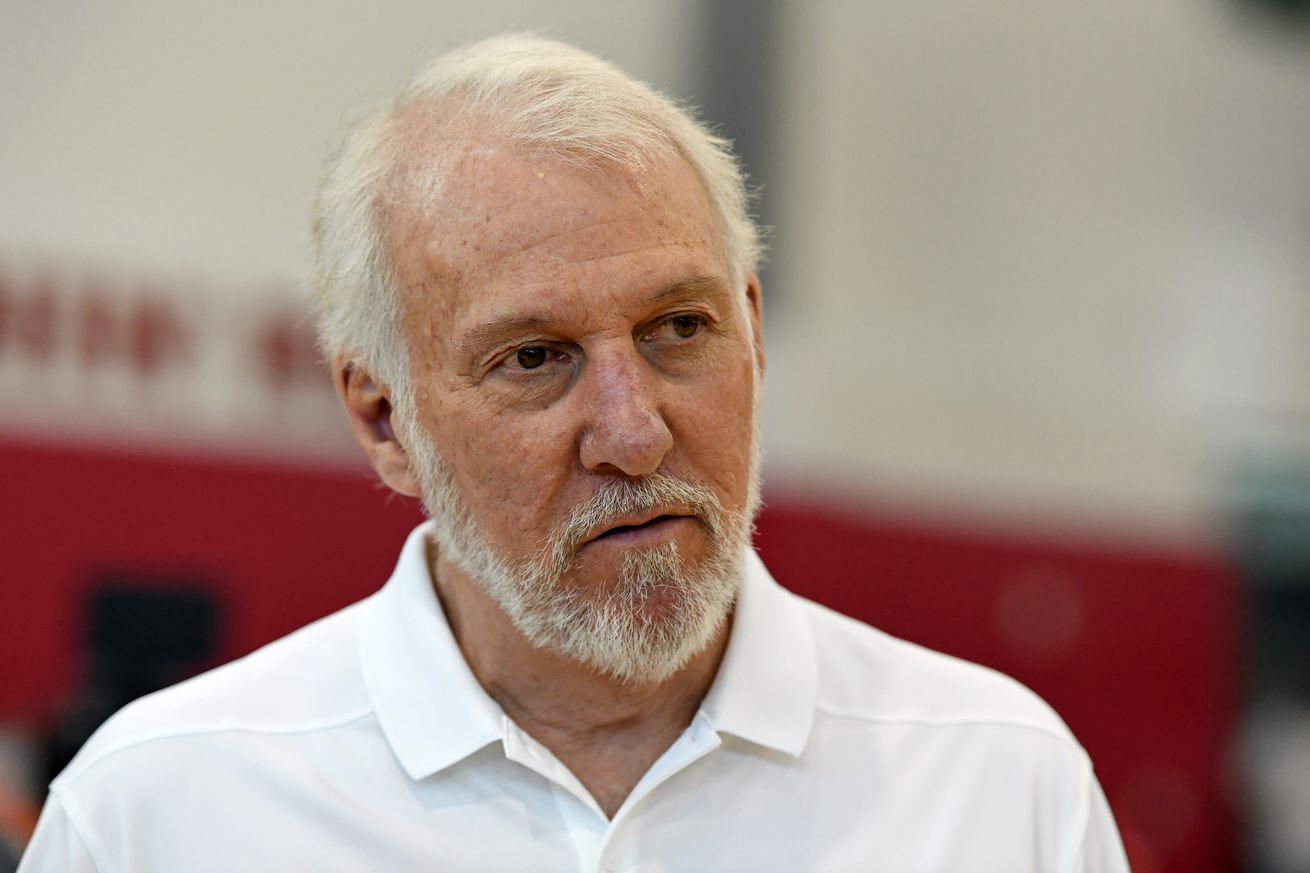 This week’s staff round-table discussion looks toward training camp and beyond.

This week, Josh Huestis and Josh McRoberts were photographed working out with Bryn Forbes, Dejounte Murray, and Tim Duncan. In addition, Rudy Gay and DeMar DeRozan are submerging into Spurs culture with Manu Ginobili in the gym. Deciphering exactly what the Spurs will look like this season and determining what PATFO is looking for in the weeks to come will be a hot topic.

In this edition of the round table, PtR contributors Mark Barrington, Bruno Passos, Jesus Gomez, Marilyn Dubinski, and editor-in-chief J. R. Wilco discuss Quincy Pondexter, Huestis, and McRoberts joining the Spurs training camp as well as the veteran sightings in the gym.

In addition, Chimezie Metu signed a three-year deal with the Spurs and the panel hypothesizes his future with the Silver & Black. And finally, what do the Pounders do with all that leftover Kawhi Leonard gear?

Questions are posed the weekend before posting, so for any new Spurs news, check back next week.

The Spurs signed veteran Quincy Pondexter to a partially guaranteed contract. Do you expect him to make it past camp? What could he bring to the Spurs if he does?

Mark Barrington: I remember him as a Spurs-killer when he was on the Grizzlies. He’s had a few years with injury issues, but I think he’s got a lot of potential as a three and D guy. I don’t think it’s too late to redeem the Q-Pon.

Bruno Passos: Assuming his contract only becomes guaranteed in January, I’d guess that gives him the inside track to hang around unless he’s physically not right. In an ideal world, he shines in preseason, resembles his 2014-15 self, and gives the Spurs another floor-stretching option in the frontcourt.

Jesus Gomez: I expect him to get the 15th spot, unless someone else really outplays him or he shows that he’s just not an NBA player anymore. He just fits the type of player the Spurs need in their depth chart and is a veteran that could help in the locker room. I don’t expect much from him as a contributor, but that would be true of any 15th guy, really.

Marilyn Dubinski: I imagine he’ll make the roster barring massive disappointment (or a huge surprise from someone else). The Spurs are in desperate need of another SF, and with DeMar DeRozan and LaMarcus Aldridge being the main focal points on offense, he fits the bill of a guy who can set screens, get to spots on the perimeter, and shoot when open. He’s also he’s a decent defender to boost, so he’s a nice guy to have in their back pocket if there’s an injury or someone like Dante Cunningham doesn’t get it done.

J. R. Wilco: I fully expect Quinte Cunningdexter to do some things this season. You could even say that he’s capable of doing the work of two men.

Josh Huestis and Josh McRoberts have been spotted at the Spurs workout center. Are they camp bodies or is PATFO not happy with its front court rotation?

Barrington: Camp bodies. They would have to be considerably better than someone already on the roster to force the Spurs to move a player with a guaranteed contract, and I don’t think those guys are capable of that.

Passos: My guess is it the former. Huestis intrigues me more than McRoberts at this stage in his career, but I think both are using this more as a stepping stone to their next NBA gig, wherever that may be.

Gomez: There’s been no announcement about those two signing a camp contract yet, but I wouldn’t be surprised if they did. I can see the Spurs loading up on veteran forwards for camp, with the hopes of finding someone that can maybe compete with Pondexter for that final spot. It just makes sense to look for guys that might be able to give them some minutes at power forward, since they are a little thin on proven contributors at that spot.

Dubinski: If they are there in any official capacity it’s likely as training camp invites who would have to knock Pondexter (or any of the Spurs’ other minimum players whose waiver they could absorb) off the roster. Overall I wouldn’t read much into it.

Wilco: This is the time of year when the Spurs roster expands well beyond the league limit in preparation for training camp. If all goes according to plan, we’ll never see these guys in Silver and Black.

Chimezie Metu signed a three-year rookie deal with the Spurs. What can fans expect of the 49th draft pick in the coming season?

Barrington: Not much this year, unless you like to watch the Austin Spurs. He’s obviously got a ton of potential, but in Summer League he had poor technique on defense, and that’s hard to correct in one training camp. I expect him to hit the regular rotation next year after a year of getting coached up in Austin.

Passos: I wouldn’t expect much outside of the G League, although Gasol’s age and the fact that Aldridge will also get nights off should mean an opportunity for him to show his stuff in San Antonio, too. Metu seems to have some fun upside as an athlete and playmaker, but if we come out of his first season simply thinking he can also do the standard NBA big stuff, that would seem like a good development from a second-round pick.

Gomez: Some cheerleading from the second row of the bench until December, when G-League play starts, mostly. He doesn’t seem ready to play in the NBA yet, not unless he’s bulked up significantly since Summer League. There might be some fun moments in blowouts if he’s active on nights someone else rests, though. I’d love to see White, Lonnie Walker and Metu create highlights in garbage time.

Dubinski: Fans will probably have to go to Austin to see him most of the time. I admittedly did not see any Summer League action, so I don’t have much of a scouting report on him. Most likely the main reason the Spurs signed him is they saw some serious potential that they didn’t want to risk losing to another team, but that doesn’t mean he’s ready for prime time just yet. His main source of minutes will probably come on Pau Gasol rest days, and outside of that I imagine the Spurs have given him a goal of bulking up and preparing for real NBA front courts starting next year.

Wilco: I can see him getting some time … at the end of the season, after the G-League playoffs are over.

Manu Ginobili and Tim Duncan have been spotted in the mix. Is it too soon to assume Manu will be present throughout the season?

Barrington: I assume nothing. But he seems to enjoy the company of the other players and he’s still getting paid by the Spurs, so I think he’s likely to be around in the training facility to mentor and help out the young guys when he’s not travelling around the world with his family.

Passos: I’d say so. I wouldn’t be surprised if he finds his way to the coaching staff eventually, but I don’t see why he’d rush into it now that he finally has more time to himself and his family.

Gomez: Manu is not going to coach and he’s not going to have an actual, formal job with the organization any time soon. He’s said as much over the years. He’s not ready for a big commitment. Dude wants to travel and he’s earned his time off. While his kids are in school, though, he’ll be in San Antonio. And while he’s in San Antonio, I can see him dropping by the practice facility often. What I’m really interested in is finding out if he’ll attend games, like 50, or stay away from the AT&T Center, like Timmy.

Dubinski: He said he’ll be around to assist and mentor just like Timmy — Coach of Whatever he feels like 2.0 — but there’s no way of knowing how often he’ll actually be present, especially given how rare practices become as the season wears on, plus I’m guessing he will want to be home to greet his kids after school and enjoy the family life. He’ll be there, but likely not as a permanent fixture.

Wilco: His family is staying in San Antonio, at least for the year, so I’m assuming he’ll be dropping in a few times — I’d put the over/under at 3.5

Pounders were asked what they were doing with their Kawhi Leonard gear. What about you? Do you have any remnants that need a new locale?

Barrington: I still wear my Leonard jersey. I just don’t leave the house with it on.

Passos: I have a Leonard jersey which I’ll still wear on occasion, as well as a set of Russian dolls that go Tim-Kawhi-Tony-Manu-Danny in descending order of size, which are still on display in my apartment. Both have more of an ironic quality to them than I envisioned when I bought them, and that probably makes me like them more, to be honest.

Gomez: I don’t own any Spurs gear, unfortunately. It’s mostly an exchange rate thing. Spurs gear is super expensive for me, especially now. But if I did own any Kawhi gear I’d just keep it hidden somewhere in my closet, I guess. The guy did help the Spurs win a championship, after all, so I would feel bad throwing it away. And you never know what might happen in the future. I don’t expect him to return to San Antonio, but he might make amends with the fans at some point, allowing me to hypothetically rock my Kawhi gear with pride again.

Dubinski: I don’t have any Leonard stuff whatsoever, so fortunately for me that’s not a problem. All I own is general Spurs t-shirts, plus “Manu Forever” and “Manu and the Retribution Block” shirts. Those will never go out of style.

Wilco: All I have is the Hand Salute shirt. I don’t see myself ever getting rid of it. But I haven’t worn it in weeks, so I don’t know if I ever will. Thinking about KL dials up decidedly un-Spursy feelings — melancholy mixed with ambivalence plus a dash of ennui. The whole thing is still too fresh for me to decide.

Do you have a question for In The Bonus? Contact Jeph Duarte.