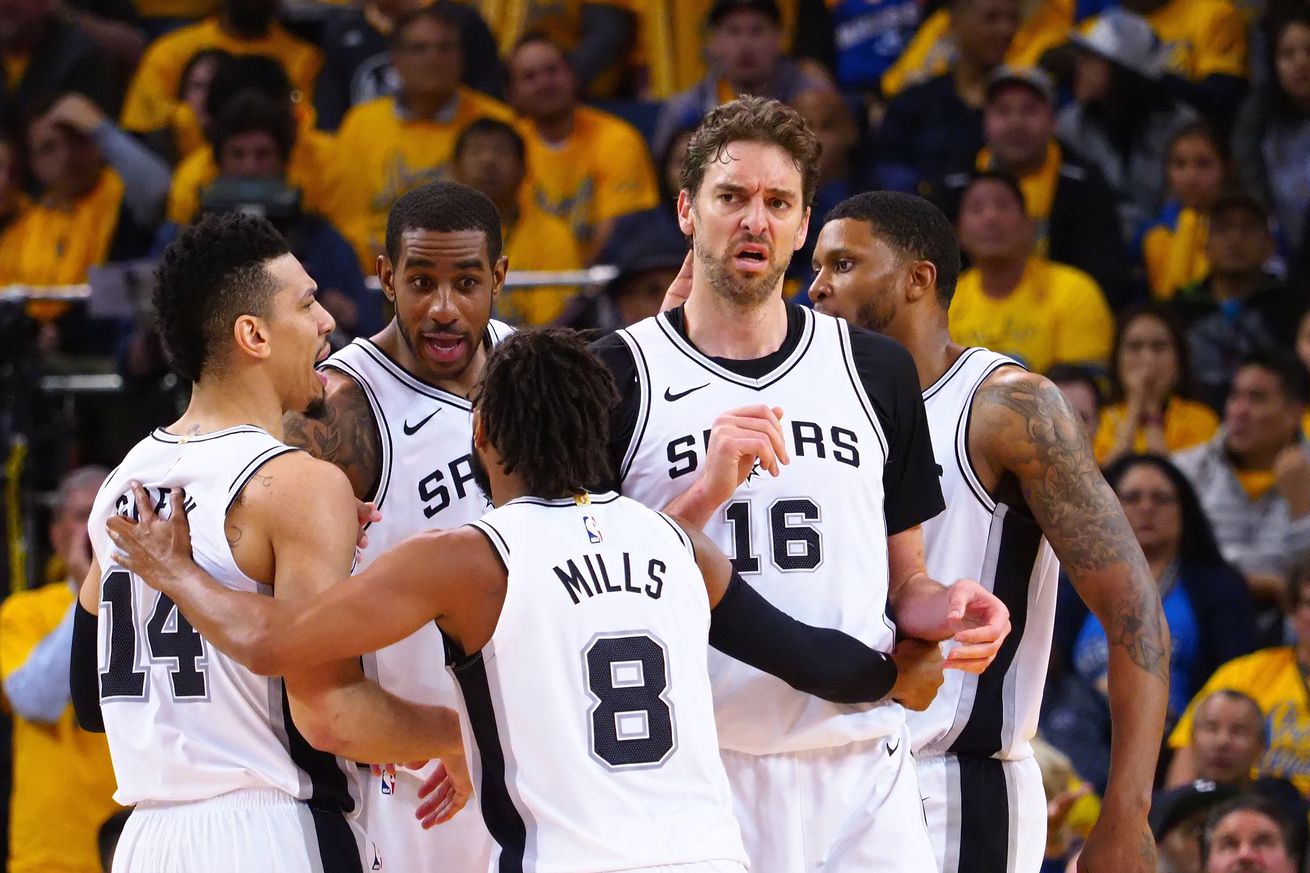 Looking to the past to forecast what could be the team’s most effective group.

If you’ve been living under a rock in 2018, I envy you, as this year has not been kind to Spurs fans. The company Lacuna from “Eternal Sunshine of the Spotless Mind” would have made a fortune opening a pop-up shop in San Antonio. The fallout from the Spurs off-season is substantial, and has left Spurs fans with many questions. How will the defense do without Kawhi Leonard, Danny Green, or Kyle Anderson? Without Manu Ginobili, who will provide a spark to the team when things aren’t going according to plan? Now that Jonathan Sanford will no longer be announcing games at the AT&T Center, will the new public-address announcer continue the tradition of saying “two shots” when Spurs players go to the line? (I’ve grown accustomed to my wife and I immaturely shouting “tube socks” during the games.)

I started this article thinking about which players should be in the starting lineup, but realized that outside of LaMarcus Aldridge, DeMar DeRozan, and Dejounte Murray, current form, injuries, matchups, experimentation, etc. will play more of a role in determining the final two starters than anything else. A more interesting question to me is which lineup Pop should use the most next season.

For starters, I refuse to entertain any lineup combinations that do not include both Aldridge and DeRozan. They are coming off all-NBA second team honors and will be featured as such. So the real question becomes, which Spurs players best compliment the skillset of our two stars?

Using last season as a precursor to next season’s success

Playing 100 minutes over the course of 22 games, the foursome of Murray, Aldridge, Davis Bertans, and Patty Mills had an average net rating of +23.7, which was the highest rating out of all 30 four-man lineups logging at least 100 minutes last season. While 100 minutes is not a huge sample size – it ranked as the 29th most used four-man lineup by the Spurs last season – I was encouraged by 24 of those minutes, which came against the Curry-less Warriors at Oracle back in March. This lineup had a net rating of +5.2, which isn’t bad on the road versus a team that still had three all-stars in their starting lineup.

Murray’s defense was extremely important last season. While his on-the-ball defensive numbers are average, he plays excellent team defense, gets steals, deflections, rebounds, and tends to out-hustle most players on the floor. Murray was a part of eight out of the ten best defensive 2-man lineups deployed by the Spurs last season, meaning his defense shined no matter whom he shared the court with. Aldridge is one of the best bigs in the NBA at protecting the rim, making him an equally important defensive addition to this lineup. While Murray and Aldridge will get the majority of the credit for this lineup being solid defensively, Bertans is far more effective on that end than the casual eye will lead you to believe. In 373 defensive possessions last season, Bertans’ opponents averaged a minuscule PPP of 0.735, putting him in the top five percent of all players in the NBA. Typically, this lineup featured Anderson or Green as the fifth player on the court, adding even more defense, but Bryn Forbes also found success playing alongside this quartet. This gives me hope that the defensive shortcomings of DeRozan will not have too much of a negative impact on this end of the court. He will still be surrounded by talented defensive players, and will be coached by Pop, who prioritizes strong team defense before anything else.

Offensively, this lineup produced a nice mix of motion offense and post-up possessions, keeping the Spurs from becoming too one-dimensional in half-court sets. The play below shows what Bertans brings to the offense. His movements typically have purpose, and his ability to get the defense to overreact can often lead to open shots.

Even during Aldridge post-ups, Bertans and Mills help give Aldridge space, punishing opponents for over-committing to the double-team. Bertans shot 50% on 32 attempts from the corners last season, and Mills shot 45.2% percent on 62 attempts. In addition to being snipers from the corners, they finished 3rd and 4th on the team in shooting percentage from all other areas beyond the arc, allowing Pop to run plays with them in a variety of locations on the floor.

In the final play below, Bertans is a few feet behind the arc and Anthony Davis refuses to fully commit to the double-team, allowing Aldridge to get to a comfortable spot on the floor.

DeRozan is one of the best in the NBA at pick-and-roll and isolation possessions, two skills the Spurs roster lacked last season. Adding DeRozan to the lineup featuring Aldridge, Murray, Bertans, and Mills will allow the Spurs to run motion offense, post-ups with Aldridge, pick-and-rolls with DeRozan, and if all else fails, isolate Aldridge or DeRozan and let them go to work.

A typical Aldridge post-up formation looked identical to the play above, where Murray was positioned on the block, with Mills and Bertans on the perimeter and Anderson in the corner. Murray’s ability to rebound and inability to hit a jumper made the block a perfect location for him. If his shooting improves, as some summer videos suggest, it will be interesting to see if Murray’s position on the floor changes. While Anderson was far too reluctant to let it fly from deep, he did shoot a respectable 40% from the corners last season on 37 attempts.

Personally, I would prefer to have DeRozan feed Aldridge the ball in the post and let Mills stand in the corner. If Aldridge gets trapped, having DeRozan there to create his own shot would be beneficial. With Mills feeding Aldridge, the plan was typically to just repost Aldridge, which usually resulted in a low-percentage tightly-guarded Aldridge turnaround jumper. If the Spurs choose to have DeRozan play the role of Anderson in these situations, DeRozan is fully capable of hitting the open corner three when necessary. Last season was an off-year from this department, but in looking at the larger scale, I feel confident having DeRozan in the corner while Aldridge is posting-up the defense.

While the rate of transition possessions created by this lineup last season probably isn’t sustainable given a larger sample size, it is encouraging to know this lineup produced such great numbers with Anderson, Green, and Murray all being below league-average in transition efficiency. Only Murray remains on the team, and I expect him to continue to improve his offensive skillset as his game matures. Bertans’ ability to finish hard at the rim or run out to an open spot beyond the arc made him one of the best transition players in the NBA last season. Mills is also above average, typically pulling up for an open three pointer. Add in DeRozan, another above-average transition player, and this lineup could be dangerous in this category. A higher frequency of easy baskets would be a welcome sight for Spurs fans, as the Spurs half-court offense was painfully inefficient at times last season.

Where does that leave the other players on the Spurs roster?

With the premise of this article being that Aldridge and DeRozan must be in this lineup, Rudy Gay’s skillset becomes less important, and the floor-spacing ability of Mills and Bertans becomes more important. Marco Belinelli is an interesting choice to replace Mills in this lineup because of his ability to move without the ball and hit the open shot, but I think Pop will trust Mills over Belinelli more often than not.

Pau Gasol had a really tough time shooting the basketball last season, and with his inability to cover players on the perimeter, I think his role will be limited to backing-up Aldridge and starting versus the few teams who still start two traditional bigs. Jakob Poeltl is the best screener on the Spurs, but DeRozan and Poeltl were not very effective together last season. They had one of the worst net ratings in two-player lineups on the Raptors. DeRozan fared far better with Jonas Valanciunas and Serge Ibaka, two players who are worse at setting screens than Aldridge, but similar to Aldridge, tend to pop to an open spot rather than roll to the rim.

Even with the success of this lineup last season, nothing is guaranteed

With the exception of the 24 minutes this foursome played together in the tight loss to the Golden State Warriors, they never played more than six minutes together in any other single game. They played a total of zero minutes together in the playoffs, suggesting there were some trust issues, despite the fantastic results. Bertans received a pretty generous contract from the Spurs this offseason, despite an inconsistent role, so I expect his role to expand this season. I expect Murray’s minutes to increase pretty dramatically next season, as this will be the year the Spurs will be looking to see if he truly is the future face of the franchise.

This is just my opinion of course, and I’m sure many of you have far different opinions on this topic. Please share your desired go-to lineup and why in the comments section below.