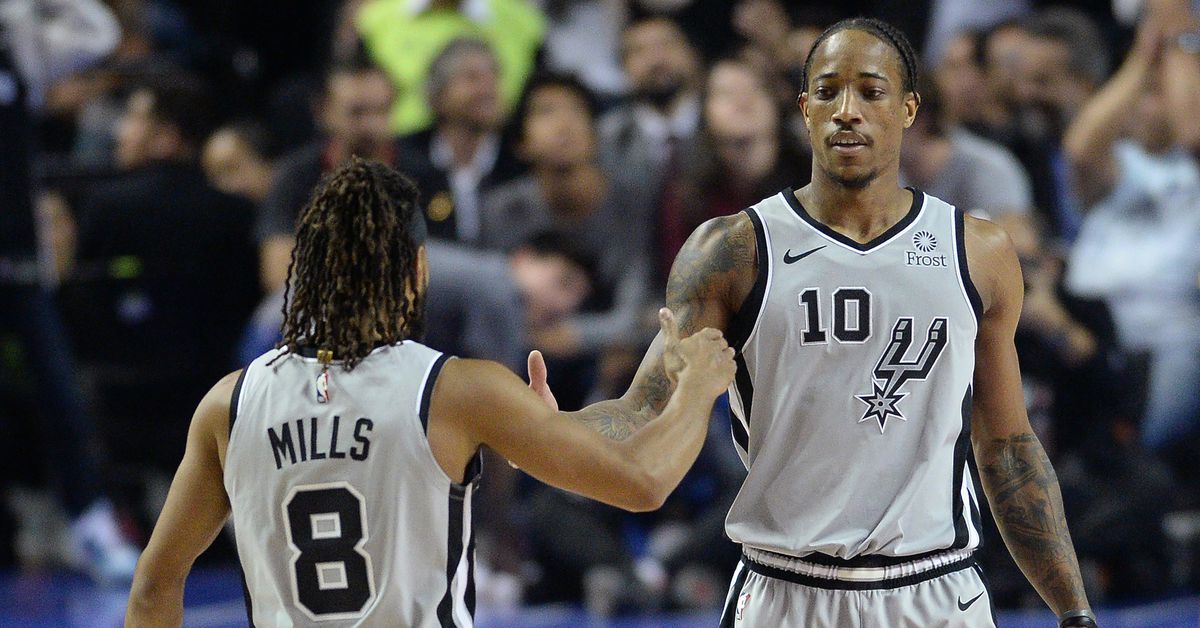 Former Spurs forward Davis Bertans has confirmed that he will sit out the rest of the season as he focuses on entering free agency healthy. Trevor Ariza and Avery Bradley will also miss the return to action in Orlando. They might not be the only ones to opt to not play again this season.

Do you expect any Spur to decide to sit out the rest of the season? Would you be disappointed if some of them did?

Marilyn Dubinski: I actually don’t see anyone sitting out, but I would understand if anyone did. This group was adamant before that they felt they were about to go on a run for the playoffs, and given the second chance I assume they want to go for it because many players have stated they don’t want to be remembered as THE team that ended the Spurs’ historic playoff streak. Whether they can avoid that or not is another question, especially without LaMarcus Aldridge. If I had to pick candidates who might sit out, Marco Belinelli comes to mind — he hasn’t had a good season, is losing minutes, has blocked out the Spurs world on Twitter (although I’m honored to say I haven’t done anything to trigger him into blocking me), and he has been very vocal about COVID-19 safety after Italy was an initial mega hot spot. Maybe Rudy Gay as an older player sits out, or DeMar DeRozan as someone contemplating free agency, but I think they want to help make a push for the playoffs based on what little we’ve heard from them during the suspension.

Mark Barrington: I would expect DeMar DeRozan to skip it, since he’s about 8 games from either being a free agent or opting in, and nothing that could happen in Orlando could help his situation. I wouldn’t feel like he was letting anyone down because the Spurs have essentially zero chance to advance past the initial stage of the tournament-in-a-can without LaMarcus Aldridge (out-shoulder surgery). Rudy Gay might also skip it, he’s signed for another year, but he really has nothing to gain by playing out a string of meaningless games inside the claustrophobic confines of the Orlando tourney. I think the youngsters like Dejounte Murray, Jakob Poeltl, and Derrick White will want to play to get additional game experience, and Lonnie Walker IV should have a breakout campaign in the remaining contests … wait, did I say breakout … poor word choice.

I’m not going to have any hard feelings about any player that ends up skipping the poorly conceived festival of social non-distancing at Mickey’s House. If a player makes the evaluation that the risk isn’t worth it for his career and family, I think that’s a choice that they should be allowed to make without recriminations. I think it’s important to be there for your teammates, but taking care of your own health and your family’s health is vastly more important than any game, and if players make the choice not to take the extra risk, then I support them.

Bruno Passos: I started Googling “NBA players with asthma” to try and get my wheels spinning, but that led to my mind to thinking about players that may be approaching free agency (Bryn Forbes, Jakob Poeltl, Marco Belinelli), players for whom an abrupt restart after prolonged inactivity may present a greater injury risk (Dejounte Murray, who had a minor lower body injury right before play was suspended) or players that may have a child on the way (no idea), and then I realized there’s really no bad reason to not want to go to one of the world’s great COVID-19 hotspots (granted, Texas isn’t much better) and push themselves to battle slim odds to sneak into the 8th seed. Whoever chooses not to go is well within their right to and I hope no one who reads this holds it against them.

Jesus Gomez: There are several players who could in theory have more to lose than to gain from playing out the season, as the risk of getting injured after a short training camp outweighs the potential good that a likely unsuccessful postseason run would have on their careers. It makes the most sense for Marco Belinelli to decide to end his season at this point, since he’ll be a free agent soon and his playing time had fluctuated before the stoppage. I think everyone, including Marco, will actually play, but I wouldn’t be surprised if someone opts out.

As for whether it would be disappointing if someone decided to stay home, I couldn’t blame them. Beyond the risk of injury there would be an increased risk of contracting an illness, which is reason enough to hesitate. I’ve seen people make the argument that sitting out after the players association agreed to play is somewhat selfish, since others would have to make the sacrifice and go to the Orlando bubble to keep the league’s revenue pouring in, but we are talking about playing during a pandemic. I can’t fault anyone for deciding against it. I’m sure anyone who opts out has their reasons and it’s not my place to question them.

J.R. Wilco: The question I find myself asking, is whether I’d go if I were a player on one of the teams. Would I be able to go that long without seeing my loved ones? What would I consider the bigger responsibility: my contract with my team, or my relationship with my family? Mind you, I don’t have responses to these questions. I just find myself asking them — and I don’t think there are any wrong answers.