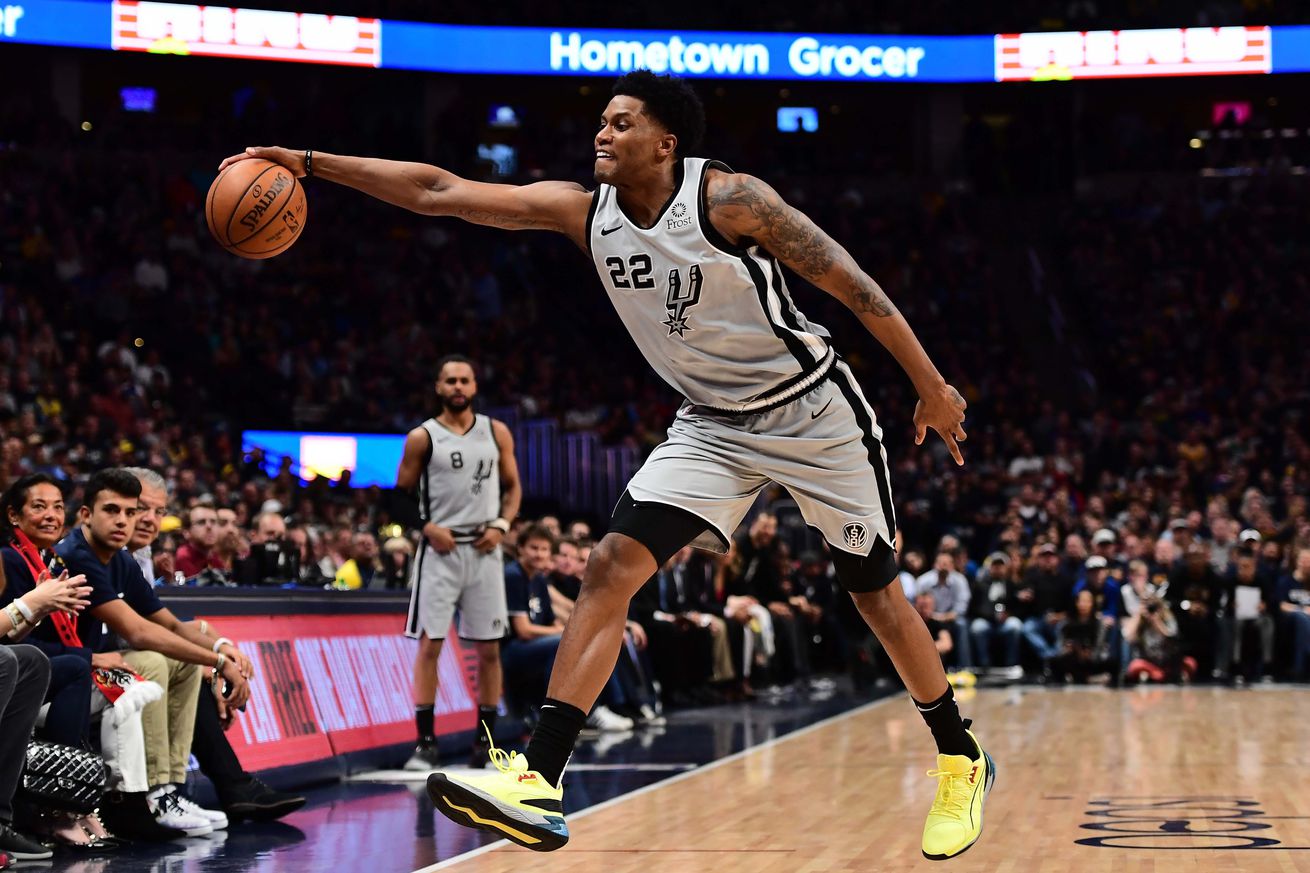 With free agency beginning today, the PtR staff discusses what the Spurs should do, offer their predictions on where the premier free agents will land and more.

Free agency is upon us. There are several superstars on the market, so things are about to get crazy. New contenders could emerge with just one signing and years-long story lines like the Kawhi Leonard saga and Kevin Durant’s potential exit from the Warriors will find their resolutions.

The Spurs should not have a particularly frenzied time over the next few days, since their roster is almost set, but they still have some decisions to make. The most important one will be whether to do all it takes to retain Rudy Gay. What they do with regards to the veteran forward could inform the rest of their plans.

In this week’s round table discussion, the PtR staff discusses all things free agency and looks forward to Summer League. Please let us know what you think in the comments.

The Spurs got a wing and a power forward in the draft. Do they need to add someone else in free agency at those positions?

Marilyn Dubinski: They definitely need to if Rudy Gay doesn’t re-sign. Even if he does it would still be good to add more depth, especially at small forward. That being said, part of me would love to see Luka Samanic surpass all expectations and earn some rookie season minutes, but I know the odds of that are low.

Mark Barrington: I don’t think either of the draft choices will get a lot of playing time this year, so it all depends on whether they can sign Rudy Gay. It would be nice to pick up an offensive minded big that has more range than Poeltl, too.

Bruno Passos: By default I try to ignore the draft in terms of addressing the next season’s needs. Another big wing or switchable 4 would be ideal, but it’s hard to say where the market will shake out. It would be great for Samanic to fill in sooner rather than later, but he’s young and it sounds like the team will take its time and let him fill out a little more as he familiarizes himself with the pace of the NBA game.

Jesus Gomez: Considering that the Spurs have been taking it slow with rookies and essentially sending them to Austin for a year, they should probably add more depth. They have enough wings to survive an injury, provided Lonnie Walker IV cracks the rotation, but if just one big in the rotation suffers as much as an ankle sprain, then giving Luka Samanic or Chemezie Metu 25 minutes a game becomes a necessity, which is not ideal. If they can get a veteran power forward on a short contract, they probably should

J.R. Wilco: I’m with Mark. Sign someone big-ish that can pass, is a decent defender and shoots from further out than Poeltl and I’ll be happy.

If the Spurs lose Rudy Gay, should they try to create cap space to make a big signing or use the MLE to replace him?

Dubinski: They can probably find a good temporary solution with the MLE while waiting for some internal growth or more cap space to open up next summer. With the youth movement in full swing but having enough talent to make the playoffs (presumably even without Rudy), I wouldn’t commit to anyone long term unless he’s young with plenty of untapped potential. If there is one exception for me, it would be Trevor Ariza. He’s a vet I’d be willing to trade some lesser pieces (like Bryn Forbes, Davis Bertans, and/or Marco Belinelli) to create cap room for, assuming he doesn’t command too much for too long.

Barrington: The Spurs aren’t going to be players in this year’s free agency for the top players, they just don’t have enough money available for a top recruit unless they get rid of DeRozan, and he’s just come off a good year and should be better after a year in the system, so they aren’t going to move him. But there are a lot of mid-level players this year that should be available for a reasonable contract after the dust settles in the contests for Kawhi, Kyrie, and Durant. The Spurs should pick up a Dante Cunningham upgrade for a short term contract and maintain their flexibility for the future.

Passos: There will be enough options out there for them not to have to do anything too wild, I think. I’d err towards long-term flexibility and avoiding overpaying in a summer where most high-dollar free agents will be commanding a bit more money than they might be worth.

Gomez: It depends on what salary dump deals are available to them. If some team happens to be willing to take DeMar DeRozan into cap space, they need to explore that option. Similarly, if it only costs them a second rounder to shed Patty Mills’ and Marco Belinelli’s contracts they’d have to consider it. If the price is steeper than that — say, a first rounder or Lonnie Walker IV — they should probably look to replace Gay with someone who is willing to sign for the MLE.

Wilco: Someone please tell me that the MLE would be enough to sign JaMychal Green. Seems like a no-brainer since he seems to have shored up the areas of his game that kept the Spurs from keeping him a couple of years back.

What are your predictions, if you have any, about where Kawhi Leonard, Kevin Durant, Al Horford, Jimmy Butler and Kyrie Irving will land?

Dubinski: I can see Kawhi fulfilling Uncle Dennis’ wishes and going back to LA (most likely the Clippers), but if not I think he stays with the Raptors. There’s nothing wrong with having an entire country in the palm of your hand. It sounds like Irving is going to the Nets, and I can see Durant going there or the Knicks. Both have cap space and the patience to wait a year while he rehabs. I have no clue with Horford. It sounds like Philly is willing to do sign-and-trades for Butler, and if that happens I think he goes to Houston (which will present quite a trio of clashing personalities with James Harden and Chris Paul), or if it’s a straight free agent signing maybe the Heat.

Barrington: Based on nothing substantial, I think the Clippers get Kawhi and Butler and instantly become title contenders next year. Horford is going to Sacramento. Kyrie and Durant will go to Brooklyn, and the Knicks will still suck. The Celtics are getting an upgrade on Irving with Kemba Walker, even though Kyrie’s stats are better, because Kemba is a better team player and locker room presence.

Passos: I’ll assume the Rockets pull off the Butler sign and trade, although I don’t know if it’s what they should do. Horford goes to Sacramento. Kyrie and KD go to Brooklyn. Kawhi, despite all the noise, stays in Toronto.

Gomez: I think Kawhi goes to one of the Los Angeles teams. Durant and Kyrie to Brooklyn would be fun, so I’m going with that solely based on how intriguing it would be. I think Horford might choose to get paid and go to Sacramento. Jimmy stays in Philadelphia.

Wilco: KL to Lakers. KD and Butler to Clippers. Horford to whoever will overpay him the most. Kyrie Irving to Brooklyn. And much good may it do them all.

The Spurs released their Summer League roster. Which prospect are you most excited to watch play in Utah and Las Vegas?

Dubinski: Lonnie Walker IV and Samanic. It’s sounding like Lonnie has been working hard and has come a long way in several key categories. If he shows the right amount of improvement, I can see him at least taking some of Marco Belinelli’s minutes, if not more. As for Samanic, I may be higher on him than most but also understand that we likely won’t see much of him next season, which is why I’m very much looking forward to seeing where his game is right now and getting to know him a little better.

Barrington: I saw Lonnie Walker IV last year and he was spectacular in flashes. I’ll be looking to see if he can be more consistent, both on offense and defense. I haven’t seen much of Samanic, so I’ll be watching to see if his game is polished enough to contribute this year. I want to see if Keldon Johnson is going to as good as I think he will be. And I always enjoy watching Jeff Ledbetter play, and Summer League is the only time you’ll ever get a chance to.

Passos: I’m definitely excited to see Samanic and Johnson do — well, anything, but it has to be Walker. After seeing White tease his breakout season in Summer League last year, there will be some expectation to see what how the G League seasoning and Walker’s high potential produce in year two against rookies and fringe-NBA players.

Gomez: I want to see how Lonnie fares as a featured option. As a second-year player he’ll get a chance to dominate the ball as much as he wants. If he proves he’s too good for Summer League and is shut down after a couple of games in Vegas I’ll be more confident about the Spurs’ wing depth going into the season. I’m also excited to see the GOAT Jeff Ledbetter back in action, obviously.

Wilco: Walker. It’s all about Walker. I can’t wait to see more of this kind of thing.

What would be your version of an ideal yet realistic off-season for the Spurs?

Dubinski: Re-signing Rudy Gay for a reasonable amount and. . . Boban Marjanovic!!! Truly few things in the world would make me happier than seeing him in a Spurs uniform again, and I’d even be willing to spend the MLE exception on him. Is he worth it? No idea, but it would fulfill a dream while staying in the “realistic” spectrum.

Barrington: Bringing back Rudy Gay on a reasonable deal, either a short term deal for big money or a longer deal for under $14M/year. I would be really excited if Dejounte’s shot is improved as much in games as it looks like it is in workouts. If Lonnie Walker IV can stay healthy all year and become a solid rotation player, I’ll be ecstatic.

Passos: Gay stays on a friendly deal — is 3 years, $36 million realistic after seeing what Barnes got? — while the team relieves some positional redundancy by trading for frontcourt depth.

Gomez: Gay signs a two-year deal (I don’t care about the dollar amount), the Spurs trade some guard depth for Marvin Williams or Nemanja Bjelica and then sign Reggie Bullock. That would be ideal, but I’d be happy if they manage to keep Gay without offering more than two fully guaranteed years.

Wilco: Ideal would be massive showings from all the Spurs youngsters in the Summer Leagues, getting unedited highlights from DJ’s camp of him raining jumpers, and getting Gay back without having to pay too much.