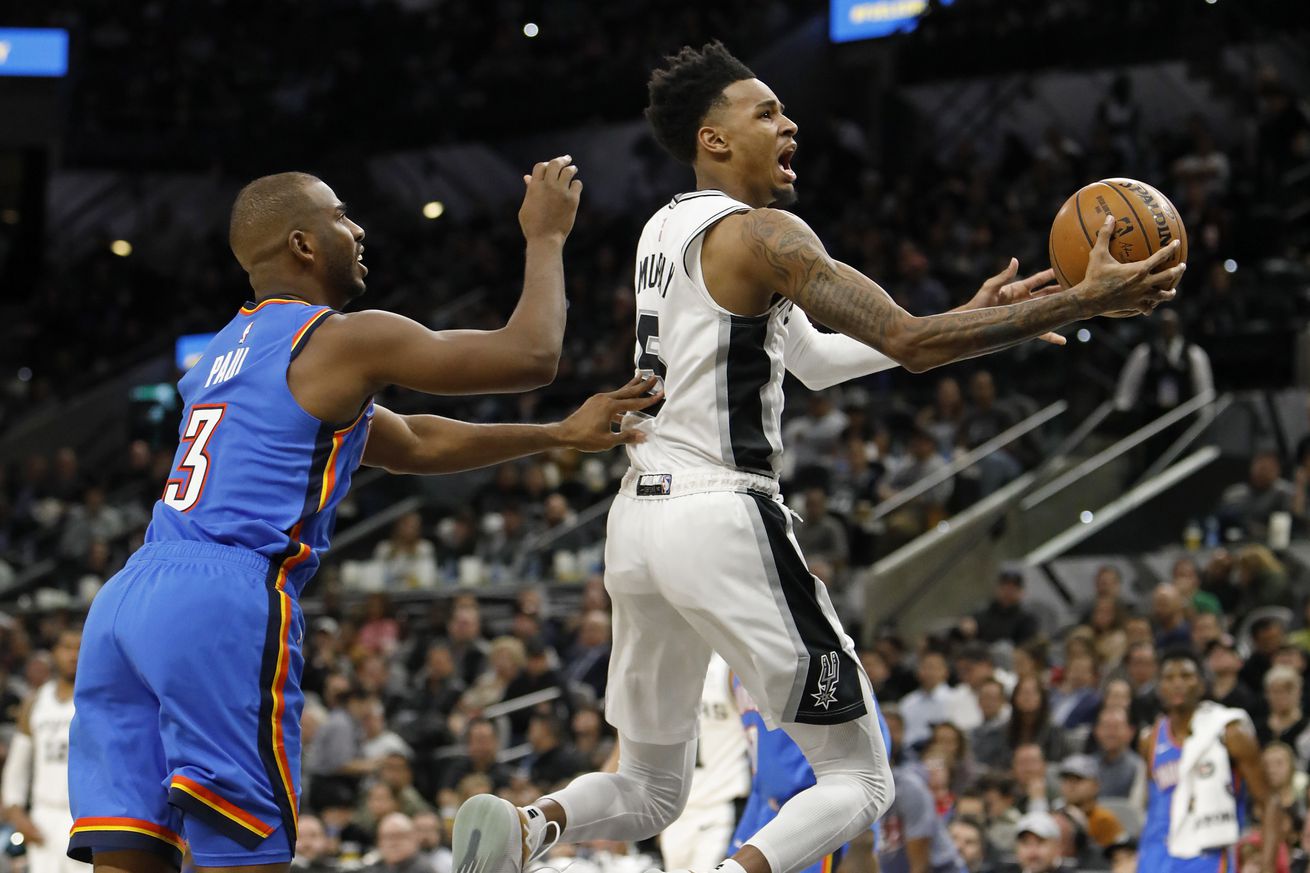 The San Antonio Spurs have rejuvenated their offense with a healthy Dejounte Murray, an efficient DeMar DeRozan and a FIBA-hot Patty Mills, but inconsistencies with their defense and LaMarcus Aldridge put the problems of this team on major display.

Week 3: After the tough loss to the Los Angeles Lakers, the Spurs hit the road to play an Atlanta Hawks team that seemed to be struggling. Instead, Trae Young returned from injury and put on a show while the Spurs played uninspired basketball in a loss. Against conference rival the Oklahoma City Thunder, LMA went into beast mode to score 39 in a decisive victory that also saw Trey Lyles play his best game as a Spur. But alas, the momentum couldn’t keep the Spurs in the win column when the Boston Celtics rolled into town. The young Celtic core, minus Gordan Hayward who broke his hand in the game, walloped the Spurs, who played their worst game of the young season. At least we learned that Patty Mills and Tim Duncan have a “hairshake” to brighten our days.

LaMarcus Aldridge’s inconsistency is an issue for the Spurs, who need him to perform like the All-Star he has been in seven of the past eight seasons. Aldridge has scored at least 20 points in four of San Antonio’s five wins, including a 39-point performance Thursday against the Thunder. He has been held to single digits in three of the Spurs’ four losses, including Saturday against the Celtics. Last season, the Spurs were 37-10 when Aldridge scored at least 20 and 11-24 in the rest of their games.

DeMar DeRozan tops San Antonio in scoring, though he looks more like a placeholder than a long-term leader. Dejounte Murray is a two-way menace. Derrick White is a starting caliber point guard. If there is a legitimate market for DeRozan, dealing the 2020 free agent may be worth the temporary step-back in 2019-20.

San Antonio had no answer for Trae Young in a loss to the John Collins-less Hawks, but followed that up with a home win over the Thunder. They closed out the week with a blowout loss to the red-hot Celtics. The Spurs’ porous defense from last season reared its ugly head this week, and they now sit in the bottom half of the league. Dejounte Murray’s performance has been a solid litmus test for San Antonio’s success so far — he’s averaging over 15 points and seven assists in wins, while putting up just 8.3 points and 3.5 assists in losses.

The Spurs are a picture of inconsistency on both ends of the floor. Given their reliance on jump shots (a league-low 27% of their field goal attempts have come in the restricted area), some inconsistency on offense is to be expected, though it’s wild that LaMarcus Aldridge only took four shots (with one trip to the line) two nights after scoring 39 points, and it doesn’t help that Marco Belinelli (effective field goal percentage of 32% – second worst among 214 players who have taken at least 50 shots) can’t seem to shoot straight. Defensively, they rank 29th in opponent turnover rate (12.7 per 100 possessions) and 30th in opponent field goal percentage in the restricted area (69.7%), and they’re trending in the wrong direction, though they face three bottom-10 offenses this week.

Dejounte Murray handed out a career-high 10 assists, and LaMarcus Aldridge poured in 39 points during Thursday’s 121-112 win over the Thunder. Unfortunately for San Antonio, its defense failed to show for a 135-115 drubbing by the Celtics on Saturday.

Aldridge got an early rest with the result out of hand in that one, finishing with only three points in 26 minutes.

The Spurs are allowing the highest opponent field-goal percentage at the rim this year, but they offset that troubling ranking by forcing teams into the second-highest frequency of mid-range shots in the league. When opponents miss, San Antonio makes sure there are no second chances. Only the Sixers have a higher defensive rebound rate.

At 5-4, the Spurs are just barely in positive net rating territory. Their plus-0.4 figure is 16th in the league.

Are the Spurs fatally flawed or still growing and learning? Do you agree with the analysts, Pounders? Let us know in the comments.