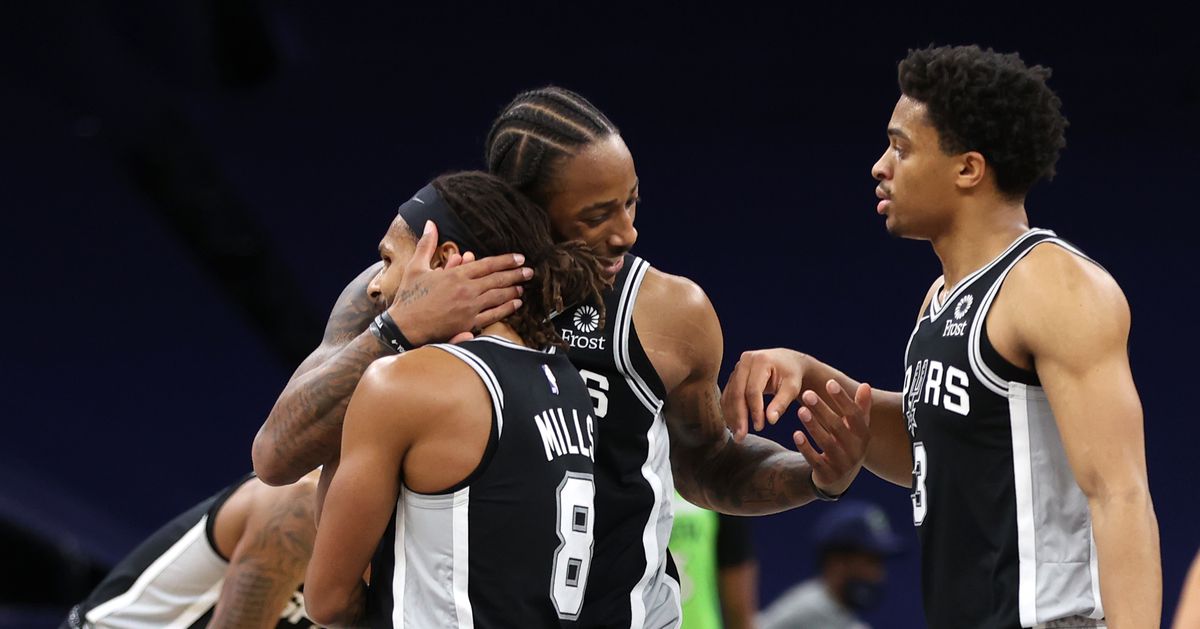 What a difference a week makes. After playing the Los Angeles Lakers twice at home last week and only able to come away with “moral” victories, the San Antonio Spurs traveled to LA to spar with the the Los Angeles Clippers and the Lakers (again). Then in the last two games of this Western Conference road trip, the Spurs met up with some young but struggling Minnesota Timberwolves and came away with a loss (in a couple of ways).

Week 3: After the rough patch last week, the Spurs came into Los Angeles to play the Clippers and Kawhi Leonard. While the youngsters have been shining, the vets have also had their impact. Enter Patty Mills. The game versus the Clips gave us FIBA Patty when he went off with 8 three pointers (of the teams’ record 20 tres) in a hard fought victory.

The series style of play this season to help mitigate COVID risks means that teams get to face in conference teams in series that allow for the same type of adjustments often made in the playoffs. Seeing the Lakers again after having played them twice helped the Spurs come out more aggressively and more prepared for LeBron James and company.

The Spurs then traveled to snowy Minnesota to celebrate Tre Jones 21st birthday . . . and oh yeah, play against Karl Anthony-Towns and the Timberwolves. While KAT was hurt, he did give the Spurs a hard time, which eventually led to the first overtime win of the season. The game saw DeMar DeRozan get 38 points and Dejounte Murray get a double double (22 pts and 14 rebounds – gotta love a rebounding guard). The second game against Minnesota in the SEGABABA saw KAT sitting out (after aggravating his injury in the previous night’s game) and DeMar DeRozan returning to LA to take care of his father who had fallen ill. While Lonnie Walker IV put on a first half show, the Silver and Black definitely missed the DeRozen’s ability to help close games out.

DeMar DeRozan wasn’t with the Spurs in Sunday’s game against the Timberwolves, as he left the team for personal reasons, but he posted 38 points on Saturday night, tying his highest-scoring game in a San Antonio uniform. He is averaging a career high in assists per game (7.0), and he already has made as many 3-pointers in nine games this season, with nine, as he did all of last season in 68 contests.

San Antonio had a chance for an undefeated week, but lost to the Timberwolves without DeMar DeRozan on Sunday. Even so, beating the Clippers and Lakers in back-to-back road games is no small feat, making this an impressive stretch for the Spurs. DeRozan has embraced the playmaker role, averaging a career-high seven assists per game, while Dejounte Murray may finally be taking the leap many have been expecting. When Derrick White returns to the lineup, San Antonio should become even more dangerous.

A lot of teams are doing the two-game, Staples Center, Clippers-Lakers (or Lakers-Clippers) trip to L.A. this season, and the Spurs are the first team to win both games. They scored 118 points per 100 possessions on both nights, getting at least one double-figure scoring night from seven different guys. DeMar DeRozan didn’t shoot particularly well (8-for-22) in his hometown, but he did have 14 assists with just two turnovers over the two games. After averaging 3.1 assists in nine seasons with the Raptors, DeRozan has averaged 6.0 in his two-plus seasons with the Spurs. This season, he’s at a career-high 7.0 while also registering a career-low turnover rate of just 5.1 per 100 possessions.

And DeRozan got his buckets in Minnesota on Saturday, scoring 38 points (tied for his high with the Spurs) in an overtime victory. He had the team’s final nine points of regulation, with the highlight being a ridiculous and-one that gave the Spurs the lead with less than a minute to go. His 26 clutch points this season rank third in the league and he was missed down the stretch on Sunday, as the Spurs lost the second game of the two-game series with the Wolves, shooting 3-for-10 on clutch shots.

There are a few things guaranteed in life: death, taxes and the Spurs being competitive. Last week they did something very few teams have been able to do over the past few years, and that’s sweep their L.A. trip. Then San Antonio split its miniseries with Minnesota to go 3-1 for the week. That warrants a climb in the rankings.

The Spurs got big performances all week. They got 27 points from Patty Mills against the Clippers, 28 points from LaMarcus Aldridge versus the Lakers and then a 38-point performance from DeMar DeRozan in an overtime win in game one of their miniseries against the Wolves.

The Spurs don’t take a lot of threes, but they make a lot of them. They are fourth in the league in three-point percentage at 39.2 percent. But their makes from deep open everything else up for them offensively.

The Spurs escaped from LA with two major victories against excellent teams and then played a great game in the frozen north, Are these games signs of more to come or just blips? Is the analysis by the professionals on point or filled with their usual anti-Spur bias? Tell us what you think in the comments, Pounders.