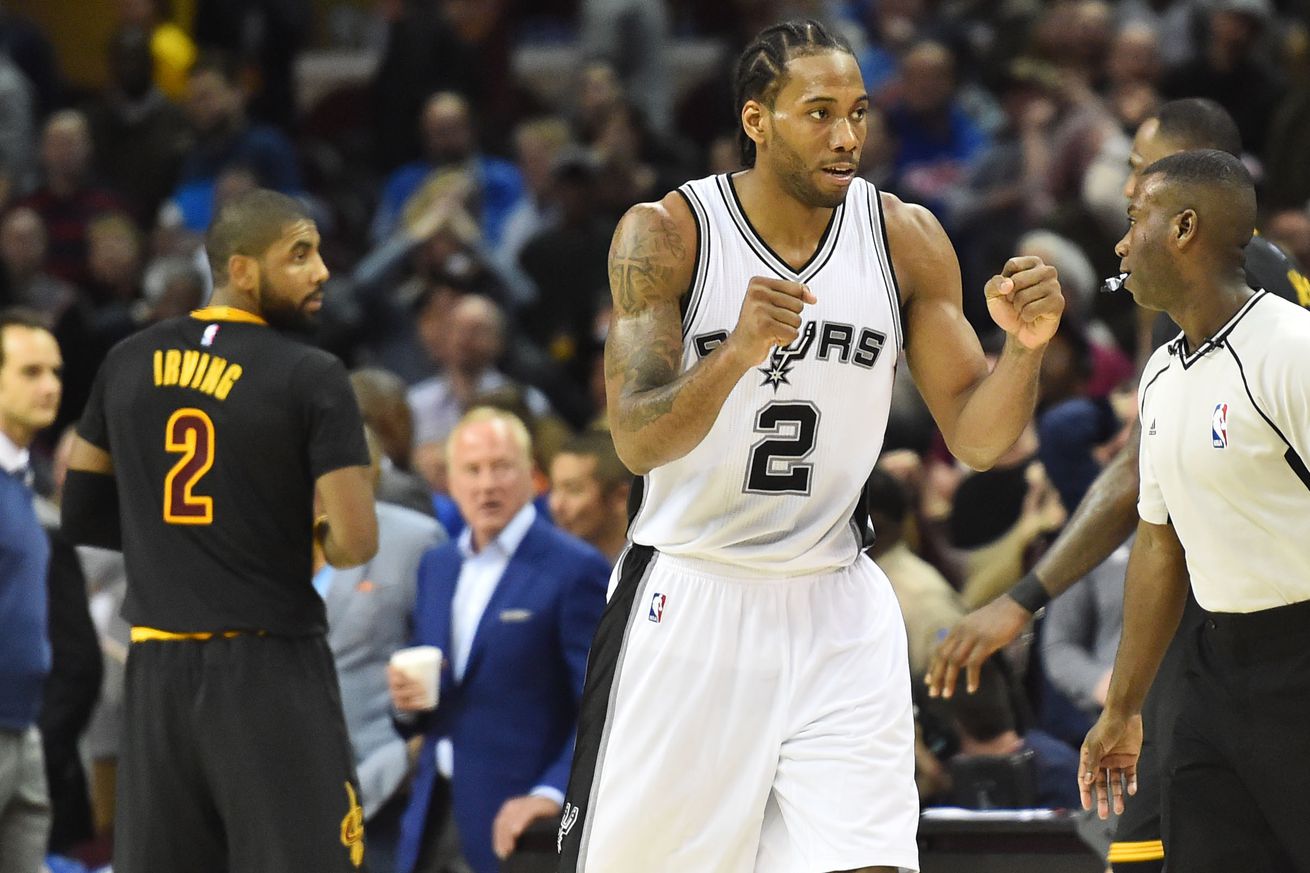 San Antonio may like being the forgotten contender, but they still keep earning their dues.

During halftime of the Spurs-Cavs game, Magic Johnson’s mouth went tragic again when he said that Cleveland was just toying with the Spurs. Well, that ended up being incorrect as the Spurs Klawed their way to their biggest win since opening night. They are now 4-0 on the road against the Warriors, Rockets and Cavs. They have a chance to make it a perfect 5-0 for the season with a win in Toronto on Tuesday. (The Spurs do not play at Golden State again this season.)

Challenges still lay ahead, though. They will have to do without Pau Gasol (out indefinitely with a broken hand), Tony Parker (returned to San Antonio for an MRI on his sore foot), and possibly Manu Ginobili after he suffered back spasms in Cleveland and will miss tonight’s game in Brooklyn. However, if Kawhi Leonard finding a new beast mode on offense plus the recent play of Dejounte Murray and David Lee is any indication, they just might navigate this latest injury bout in typical Spurs fashion: with no problem.

The Spurs lost Pau Gasol to a broken hand on Thursday and were also without Tony Parker against the champs on Saturday. But with the best bench in the league, they always have somebody to step up. David Lee (who has started the last two games) is still a very good offensive player and Dejounte Murray had a big game (14 points and six assists). Of course, Kawhi Leonard has shown that he can take his game to a new level no matter who’s in the lineup, scoring 30-plus points in six straight games, with a career-high 41 in the overtime win in Cleveland.

Plug in rookie Dejounte Murray for future Hall of Famer Tony Parker. Play at the defending world champion Cavaliers on Saturday night. Have Murray go 7 of 10 from the floor. Win.

Spoiler alert: Kawhi Leonard has a great shot to win Western Conference MVP of the Second Trimester when the middle third of the season concludes. Reason being: Leonard has almost single-handedly expanded the overall MVP discussion that, until now, was focused solely on James Harden and Russell Westbrook. How are we even supposed to notice that Pau Gasol and Tony Parker are out when Kawhi outduels LeBron James in Cleveland? After not scoring more than 35 points in any of his first 361 career regular-season games, Leonard has done it twice in his past four outings while assembling an overall streak of six 30-point outings to challenge George Gervin‘s franchise record of 10 in a row.

Kawhi dropping 41 on 50% shooting in an overtime win against LeBron (and the Cavs) just underscores how quietly ridiculous he’s been. That’s six straight games with 30-plus and counting.

After a thrilling 118-115 overtime win over the Cavaliers on Saturday night thanks to a career-high 41 points from franchise cornerstone Kawhi Leonard, the Spurs are on pace for their second consecutive 65-win season. Leonard, who’s averaging a career-high 25.5 points and 3.2 assists, has scored 30-plus points in each of his last six games.

San Antonio now has wins at the Oracle, the Q and the Toyota Center down in Houston. The Spurs still don’t strike fear the way they did three years ago, but the bar will be the same in the playoffs. If you do not play well, smart and disciplined, the Spurs will rip you to shreds. Kawhi Leonard is jamming his way back into the MVP conversation with a crowbar.