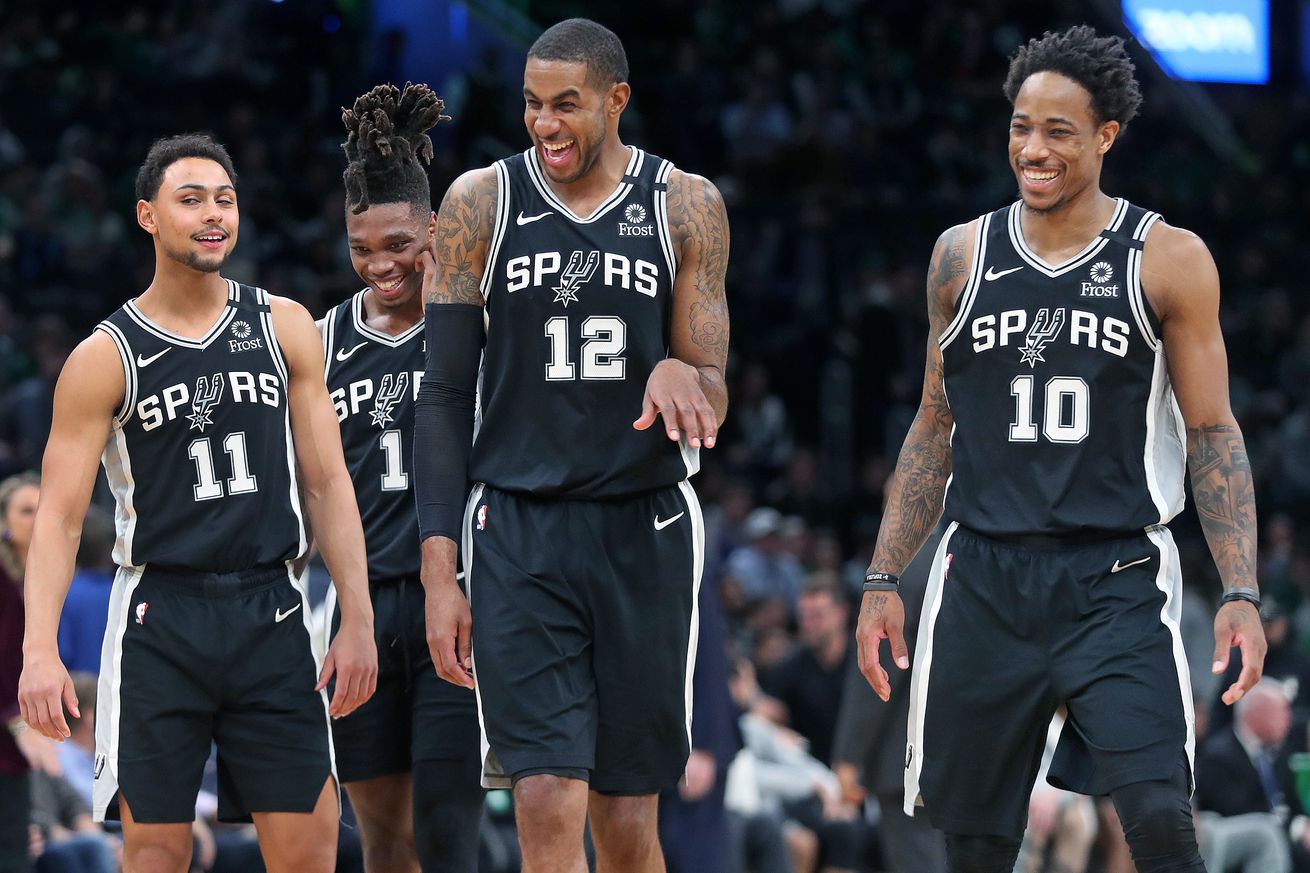 Spurs beat three out of the top four Eastern Conference, but lose to a below .500 Western rival.

The San Antonio Spurs have been an enigma this season. They started the season hot going 3-0 but then traded wins and losses. Sometimes the good guys lost to teams that are lottery bound, and sometimes they took out league favorites. They had a long losing streak of 8 games, and then they took four games to overtime, winning 3 of them. This week, the mystery that is the Spurs continued. They beat the league-leading Milwaukee Bucks and the 2nd-best in the East Boston Celtics. Then they lost to Memphis, who just stole the Western Conference 8th seed from them, only to turn around and beat 4th in the East Toronto in the frozen North.

Week 12: The week started with the second game of a home-and-home series with the Bucks. In the game in Milwaukee, the Spurs kept pace with the league leaders until the very end. The game at the AT&T Center was different. The Spurs couldn’t miss and they hit a team high of 19 three pointers to beat the Bucks at their own game. The Silver and Black then set out road for a 4 game road trip. First up was Boston, who had destroyed the Spurs in San Antonio back in November. The Spurs showed some consistency and led from start to finish to get some revenge. But per usual, many Spurs fans got their hopes up that the team had finally “turned the corner” only to have them dashed on Friday night against the Grizzlies (who at the start of the game sat half a game behind the Spurs for 8th seed). In a game reminiscent of the long losing streak, the Spurs looked lethargic and discombobulated in the loss (of not just the game, but the 8th seed). But hold on, the Spurs traveled to the tundra of Toronto to play the former team of DeMar DeRozan, Jakob Poeltl, Rudy Gay, and Marco Belinelli, and apparently they all wanted to take it to the Raptors. DeRozan and Poeltl were treated to tributes, and the Spurs rallied from down 19 in the fourth to win the game by one.

LaMarcus Aldridge has morphed into a lethal 3-point threat over the past 10 games, shooting 56% from long range on five attempts per game. (He had five 3-point attempts in a game only twice before this stretch). It seems like DeMar DeRozan has reaped the benefits of the gravity created by Aldridge’s perimeter shooting. DeRozan has averaged 27.3 points on 63.4% shooting in the 10 games, with all but six of his 161 shots coming inside the arc.

What’s happening to LaMarcus Aldridge? The aging big man has finally expanded his game beyond the arc in his last nine contests, making 59.1% of triples on 4.9 attempts per game. Aldridge’s efficiency is sure to dip, but the volume is important. Aldridge beyond the arc opens the lane for DeMar DeRozan as well as San Antonio’s young guards. For a team squeezed for spacing, Aldridge’s adjustment makes a huge difference.

If we told you the Spurs went 3-1 against the Bucks, Celtics, Grizzlies and Raptors this week, you probably wouldn’t guess that the loss came to the Grizzlies. The Spurs have played much better of late, winning five of their last eight games behind the best stretch of the season for DeMar DeRozan and LaMarcus Aldridge. DeRozan is averaging 28.3 points per game on 62 percent shooting over the last eight games, while Aldridge has averaged three made 3-pointers per game.

The Spurs lost what was their most important game of the season to date, allowing the Grizzlies to register 22 fast break points and 25 second chance points on Friday. But they also beat three of the four best teams in the East last week, scoring 130 first-half points against the Bucks’ and Celtics’ top-three defenses, and then coming back from 18 down in Toronto on Sunday.

DeMar DeRozan has been on fire, averaging 27 points on 63% shooting (including 82% in the restricted area) over his last 11 games. His overall free throw rate isn’t quite where it was a few seasons ago, but he’s totaled 52 attempts over the last five games, and with 29 assists over the same stretch, he’s one of eight players averaging at least 20 points, five rebounds and five assists. He’ll go head-to-head with one of the other seven (Jimmy Butler) twice this week as the Spurs continue to play the best teams in the East.

DeMar DeRozan has had higher-scoring seasons but never one this efficient. On pace for a career high in true shooting percentage despite his ongoing refusal to shoot from deep, the 30-year-old has been particularly hot lately.

Through Sunday in Toronto, he’s been on a run of 11 straight games with at least 20 points and 50 percent shooting, the longest streak since Giannis Antetokounmpo did so for 14 games from Nov. 23 to Dec. 21 and one of just nine such tears in the last decade.

While DeRozan does damage inside the arc, the rest of the Spurs may have finally relented in their strange quest to pursue the most anachronistic shot profile in the league. Though still dead last overall, the Spurs are in the top half for three-point-attempt rate since Jan. 1.

LaMarcus Aldridge, suddenly popping beyond the arc regularly, has already set his career high for made threes in a season.

Next thing you know, the finally modernizing Spurs (3-3 in their last six games) will be trading in their flip phones and checking out this “Internet” thing everyone’s been talking about.

Do some pretty impressive wins outweigh the mediocre play from the losses? Does the weakness of the bottom half of the Western Conference mean the Spurs can afford this or do they have to do more? Are the analysts too focused on LMA and DeRozan? Have they missed something you see? Let us know your thoughts in the comment section.