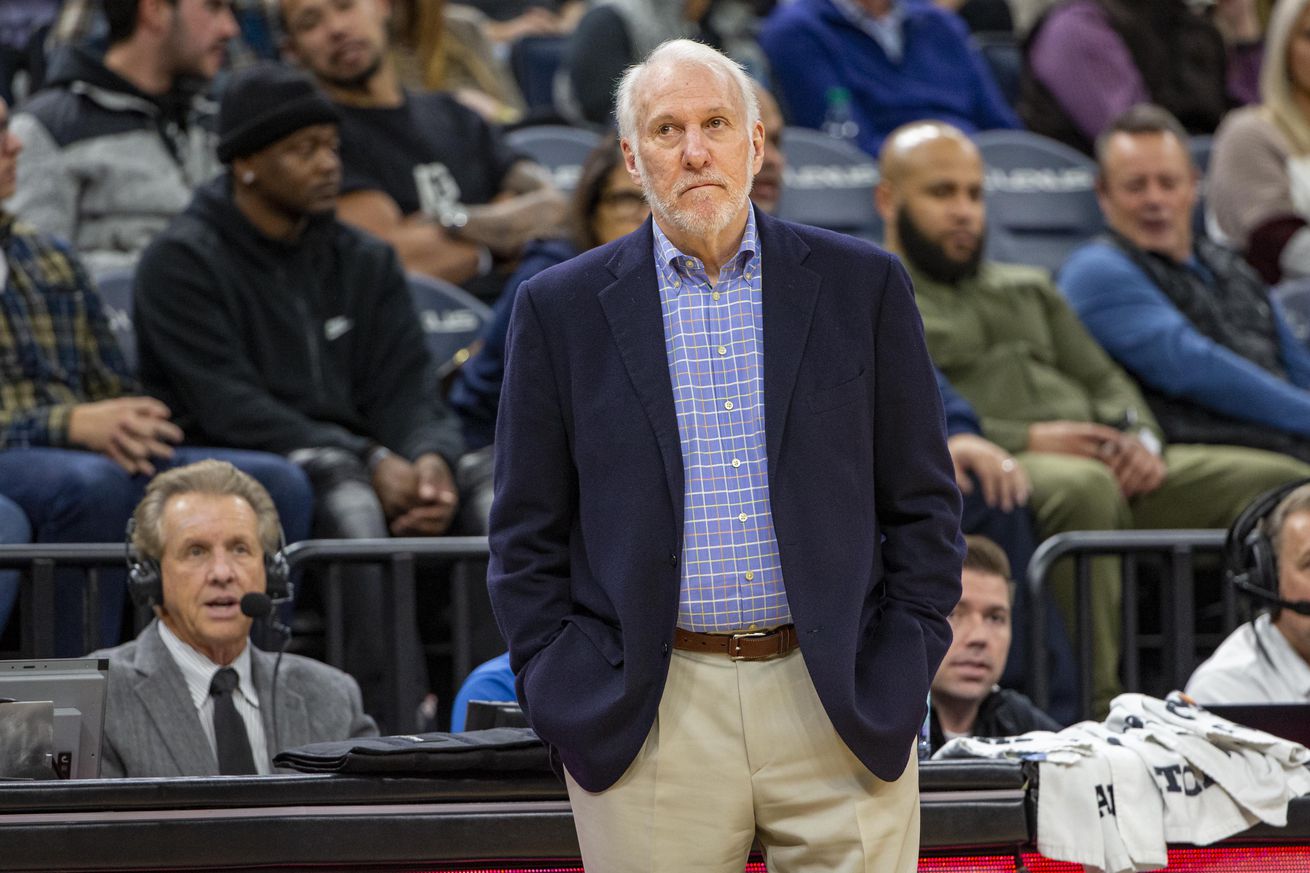 After winning 4 of their first 5, the Spurs find themselves amid a 3-game losing streak and with a tough road ahead. Here’s a holistic look at what’s gone wrong and what could help the team get back on track.

It’s probably still too early to jump to any one conclusion about the 5-6 Spurs who, despite a relatively easy early schedule, have not hit the ground running like many expected. Things take time with any new group of players, especially when there’s a shake-up at the starting point guard position, and all the moving parts can make it hard to come up with a compelling diagnosis.

Still, it’s natural for a sense of frustration and inertia to set in when an unproven team, in doing the same thing over a stretch of time, continues to spin its tires. What’s contributing to this team not playing up to the sum of its parts thus far? Let’s take a quick look under the hood.

Let’s start with the good news, which includes a handful of individual players who have come out strong or shown improvement upon last season. Dejounte Murray’s had plenty of moments; unlikely starter Trey Lyles has impressed by rebounding well, keeping his mistakes low, and letting the ball fly when open; Derrick White has shaken off a rough start to put up improved numbers in a variety of areas; Patty Mills and Bryn Forbes have saved possessions by hitting shots through tight windows; DeMar DeRozan and LaMarcus Aldridge’s games haven’t gotten with the times (one is averaging slightly fewer threes, the other slightly more) but they haven’t aged poorly either.

The narrative with the Spurs in 2019 will always start with its retrograde offense built around midrange specialists, but that side of the floor is fine, for the most part. There’s certainly a ceiling over what a DeRozan– or Aldridge-oriented possession will provide, but the pair are both shooting north of 50% from the field and giving the team more or less what they got last season.

Yes! Sort of. Last year’s Spurs were 11-14 with the 29th ranked defense on December 5th, 2018. They closed out the month with a league-best +14.9 net rating, which included the NBA’s best offensive rating and 5th best defensive rating, making bloggers who attempted to prognosticate the team’s breaking point look like idiots.

H/T to Jabari Young, formerly of The Athletic, who wrote this piece last year looking to explain the turnaround. The reasoning according to his article? Improved “trust” and a shift in their pick and roll coverage from a two-man “square” scheme to a more typical “push” scheme that forces the ball-handler away from the screen (and away from the middle of the floor) and simplified things for the players.

In addition, the team did benefit from a huge post-Thanksgiving resurgence from Aldridge (which carried on for the rest of the year) and a shift that moved Dante Cunningham from starting forward to the fringes of the team’s rotations. With apologies to those in Spurs Twitter that put the team’s issues on Popovich playing Marco Belinelli over Lonnie Walker IV, no one thing is behind the struggles, and no one change will save these Spurs.

Is a similar defensive adjustment possible this season?

If the Spurs are to make a fundamental change in how they play defense, that may have to wait until this road-heavy portion of the schedule is over. At least, that’s how it played out last season when Pop took advantage of a home swing to embed the new scheme. It’s something to keep an eye on, especially when the team hits a stretch in late November where all but two games within nearly a month will be in San Antonio.

Where has the offense most dropped off this year?

Last season’s Spurs had the 6th best offensive rating at 112.2 points per 100 possessions; this year, it’s down to 109.4 (8th in the NBA). Things could certainly be better on that end — especially with the starters, who are putting up a 103.5 offensive rating (and 106.2 defensive rating) in their 120 minutes together, good for the worst net rating of any unit in the league that’s been on the floor for that long. It’s undoubtedly dragging the team right now, largely because of the organization’s (completely logical) investment in its starting point guard.

Murray’s strengths in the open floor somewhat mask the numbers with that lineup’s half-court offense. The 23-year-old’s still very much learning how to play the hardest position in basketball, which includes making secondary and tertiary reads and being overall a rising tide for his teammates. It doesn’t help that, in the event that he does break a defense down, the ball is swinging to either DeRozan who can’t make a defense pay from deep, or Aldridge who isn’t mobile enough to attack most close-outs. Not enough possessions go from Good to Great™, and far too many have counted on Forbes’ ability to make something out of nothing. No player on the team has more attempts when the shot clock has between 0 and 7 seconds left than Forbes.

Add to that a couple of across-the-board issues, like the big dip in 3-point shooting and the team’s inability to get easy points in the paint (a continuation from last year) and the Spurs are making things much harder on themselves for easy points.

When will we see Murray and White play meaningful minutes together?

One of the most anticipated combos coming into this season has been MIA early on, with the garbage time of Wednesday’s loss the most we’ve seen Derrick White and Dejounte Murray play together. It makes sense for the team to focus Murray’s time on getting him re-acclimated first after a whole year off, and his 5-5-5-5 minutes restriction further limits how you can use him, but it is still odd for the team to not kick the tires on what he and White, the team’s other perimeter stopper, can do together.

Murray was given a timetable of at least the first 10 games of the season in which he’d be under a minutes restriction. The team may be reevaluating that now but it would seem that the chance to see both on the floor for meaningful stretches may be coming soon.

Will playing them together move the needle?

It won’t solve everything, and it’ll take time for to the two to adjust to playing off each other, but it may still be a net positive, with the offensive concerns mitigated by the pair’s defensive gifts. This team feels especially devoid of excitement right now, and seeing its potential backcourt of the future wreaking a bit of havoc versus opposing guards could do a lot for the psyche of the fanbase.

What is the next lineup adjustment?

This is the start of many open-ended questions, because the Spurs’ path forward really can go one of many ways provided they don’t get better through organic improvement and tactical tweaks.

At this point, the way things currently look, the team appears in need of a shake-up with its starting lineup, which has underperformed on both sides of the court and is a mishmash of fine individual players that don’t quite work together. But making any adjustment also feels like a game of Jenga. Lyles and Forbes seem like the likeliest pieces to move, but they’ve 1) played well in their roles, 2) are not fundamentally the issue with the starting lineup’s woes and 3) perform essential tasks (spacing for Forbes, dirty work and low-usage offense for Lyles) that fit with the other starters. Then again, benching DeRozan or Aldridge is nigh-impossible and the same political reasons may apply to Murray, now recently extended and having been handed the keys to the offense.

The obvious players waiting in the wings are DeMarre Carroll, who’s looked fine in limited opportunities. and Lonnie Walker IV. Speaking of.

Rather than being sent to Austin for extra reps, Walker’s spent the early part of the season mostly watching from the sidelines. Even knowing Pop’s short leash with younger players, not seeing the team’s promising wing get a few more chances is something of an odd development.

Should he be playing meaningful minutes?

Would playing him more help?

What identity will this team lean towards?

The latest episode of Superfluous Poppycock touches on this team’s lack of an identity, an existential concept that carries varying weight depending on how things are going for a team. The Spurs have often hung their hat on defense, but the roster’s strengths, especially the players getting heavier minutes, lean towards offense. The bench and younger plays benefit from a fast pace and 4- or 5-player-out attacks, while that goes against the DNA of its 2 stars.

How willing might the Spurs be to make a major trade?

We circled around this question before last December’s turnaround and things got better without a move, but it’s not enough to dismiss this question entirely moving forward. The Spurs should be open to moving anyone that’s not a part of the franchise’s future, but without a hot market for players like DeRozan (the interest from the Magic notwithstanding) or Aldridge, it’s hard to imagine a high likelihood for either being traded.

Can the team get by without making one?