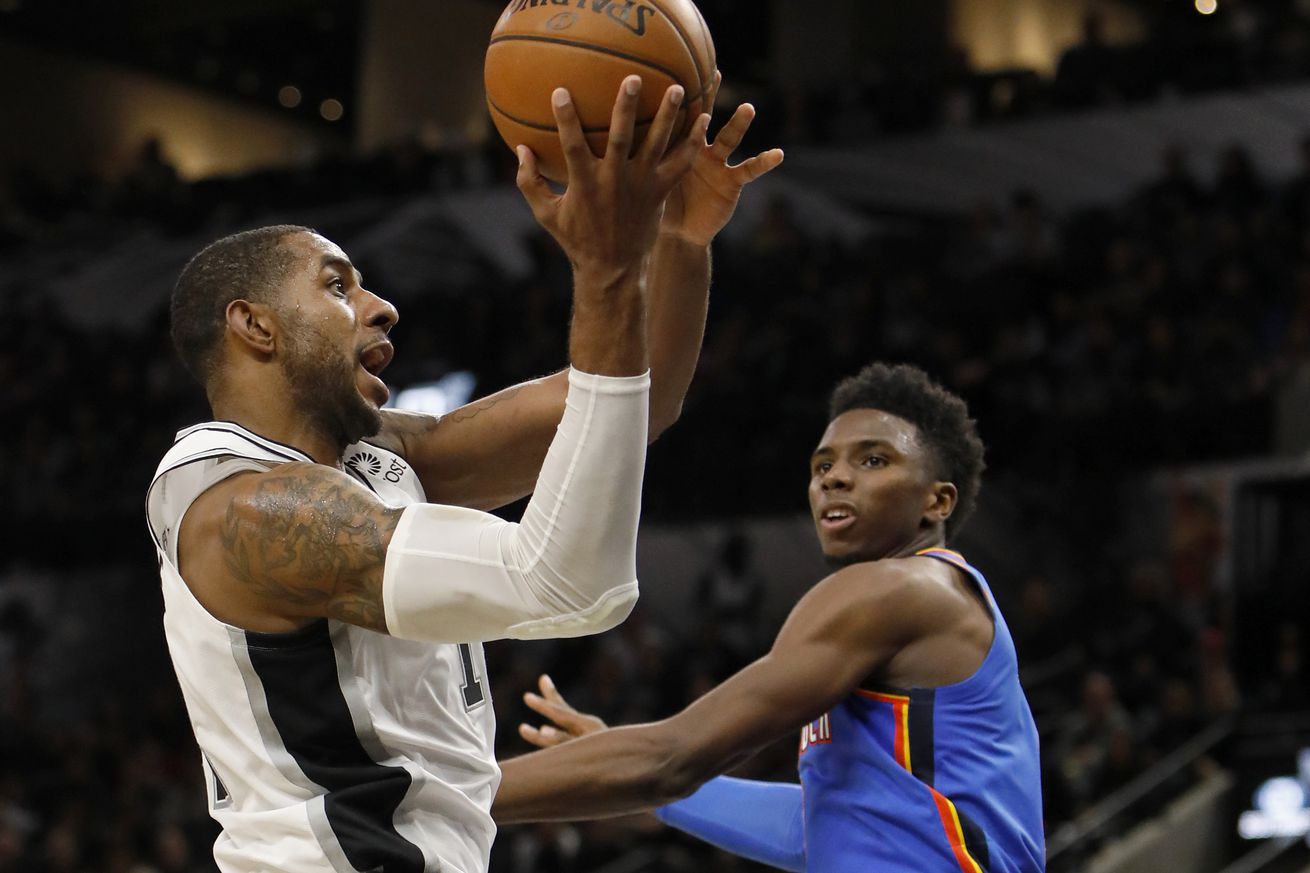 Aldridge temporarily silences his critics with a season-best performance against the Thunder.

If you hadn’t been following the Spurs prior to today and decided to look up LaMarcus Aldridge’s season stats, you would see a very solid line of 19 points on 51.7 percent shooting, 6.6 rebounds, 2.5 assists, and 2.1 blocks. The 51.7 percent would actually be the second highest mark of his career, falling only 0.2 percentage points below his career high of 51.9 percent that he achieved last season.

If you have been following the Spurs, you know that Aldridge’s season stats do not tell the entire story. Prior to the Spurs’ game against the Oklahoma City Thunder, he was shooting only 44.2 percent from the field, which would have been the lowest mark of his career. There were some who were saying he was done and that he should be traded for <enter ridiculous trade proposal here>.

It’s never a bad thing to score 39 points on 19 of 23 shooting, but what I liked seeing the most was the variety in which he scored. Yes, some of his points still came off those frustratingly difficult turn around jump shots from the post, but those attempts were minimal and only came after he had already gotten into an excellent rhythm.

For the most part, the Spurs took advantage of Steven Adams’ lack of mobility and refusal to leave the paint, using a variety of pick and pops, pick and rolls, and screens to get Aldridge open. On one play midway through the fourth quarter, Adams decided it was time to close out on one of Aldridge’s shots from outside the paint. Unfortunately, Adams’ doesn’t have to ability to close out and stay in front of him, allowing Aldridge to put the ball on the floor and score on an easy layup.

When Nerlens Noel — a smaller, more athletic big who is able to guard the perimeter — was guarding Aldridge, the Spurs allowed him to go to work in the post. He would either bully his way into the paint or simply front Noel and shoot over him. Overall, it was a smart game plan executed perfectly by the Spurs.

I’m not denying that watching Aldridge shoot a variety of long two pointers and shots from the post isn’t the most enjoyable brand of Spurs’ basketball, but winning is better than losing. With the current construction of the roster, a heavy dose of Aldridge is the Spurs’ best chance at winning games, whether we like it or not.

Even after his performance against the Thunder, the elephant in the room is whether or not he can put together this type of performance against a higher caliber team. Out of the Spurs’ first eight opponents of the season, only three of them — the Los Angeles Clippers, Los Angeles Lakers, and Portland Trail Blazers — are likely playoff teams. In those three games, Aldridge has averaged just over 9 points on 10 of 34 shooting. It’s way too small of a sample size to be overly concerned, but it’s something to monitor as the season progresses.