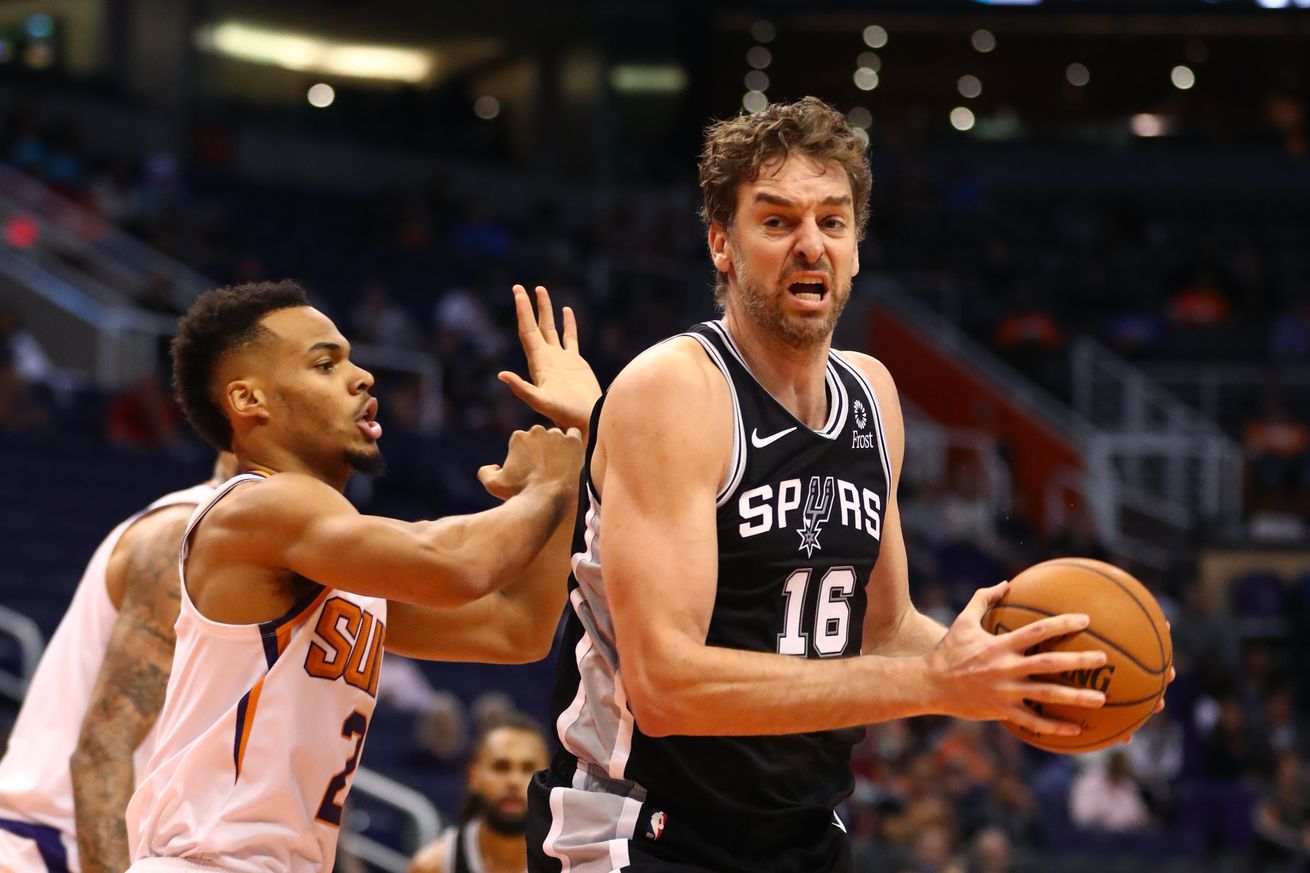 The veteran big man is out of the rotation and won’t likely get back in it any time soon. Will he be fine with that or will he ask out of San Antonio?

After struggling to find an identity earlier in the season, the Spurs have settled on a rotation that works. Unfortunately for Pau Gasol he’s not in it and it’s hard to see a way for him to claw back into it. In recent games in which the team has been injury-free, he’s barely seen the court.

This development has the potential to create an awkward situation between the Spurs and the future Hall-of-Famer. So far Gasol seems to be fine with being a bit player but that might change. Based on his own words, Pau still believes he can play and plans to keep doing so for years. He’s been known to make his dissatisfaction known in past stops. If the DNPs start to pile up, he’s not likely to be happy.

If the Spurs could easily trade him or waive him that wouldn’t be an issue, but his contract makes it tricky. Figuring out how to navigate any potential Pau discontent could prove to be hard to do for San Antonio.

It should be noted that reinserting him in the rotation is not an option at this point. The starting lineup is not doing as well as it did during the December run but it’s likely due to individual struggles. Replacing anyone for Pau would push LaMarcus Aldridge to power forward and force the defense to adjust to a plodding frontline. Gasol used to be the backup center and offensive hub of the second unit, but the subs changed their attack in his absence. Instead of having a big man facilitate from the high post more often than not, they now run more pick and rolls and use dribble penetrations to create breakdowns. This new approach requires a rim runner, and Jakob Poeltl fits that role infinitely better than Pau, and Poeltl’s mobility on defense makes him a better fit on the other end as well.

There’s simply no room for Pau. That fact has been obscured a bit recently thanks to some injuries and a rest day for DeMar DeRozan that allowed Gregg Popovich to give Gasol some minutes. Pau was also coming off of an injury, so it wasn’t that noteworthy that he wasn’t getting big minutes right off the bat. As each game passes, it becomes harder to refer to Gasol’s absence in the rotation as anything but a significant demotion. Now, there’s a chance he’s fine with that, since he’s 38 years old, has nothing to prove at this point, and has already secured his last big contract. Yet everything he’s said while a member of other teams suggests that he won’t be. Pau has stated he wants to play and his performance before the injury was good enough to convince him that he still can. So the question is, what to do about Pau if he becomes disgruntled?

The quick answer would be to try to trade him. That’s what player-friendly franchises like the Spurs typically try to do when they can’t accommodate a veteran in their rotation. Unfortunately finding the right target could prove difficult. Matching salaries would be tough, since Pau makes close to $17 million this season. The Spurs would likely love to get an expiring for him, but Gasol has $6 million guaranteed on his contract next season, so that’s probably not happening. A team looking to shed some future salary could use him but in that type of transaction the Spurs would be taking on a big contract that extends past this season. From a cap perspective that wouldn’t be terrible, since San Antonio won’t be a player in free agency next summer, but it would only make sense if they can get someone that can crack the rotation. Pau alone won’t fetch that kind of return.

The Spurs could try to be buyers, using Pau’s contract and including sweeteners like both their 2019 draft picks or perhaps even one of their young players to get a real upgrade. It would have to be a perfect fit to make it worth the hassle. With the team in the middle of a reloading process and after finally developing some chemistry with this group, it could be a little risky to go for a big move which won’t likely propel them to true contention anyway. Would it be worthy to cash in a lot of chips for, say Aaron Gordon or Otto Porter Jr. and their huge contracts when neither will really move the needle? It’s hard to say. That’s not the type of deal the Spurs typically do mid-season, anyway. They would probably like to go for something smaller if Pau wants out, but that might not be an option.

If that’s the case, the Spurs could always buy Pau out. It shouldn’t be too hard to come to an agreement on a sum, and then waive him. Pau could then catch on with another playoff team. The Spurs wouldn’t be getting anything back for Pau but would have an open roster spot to potentially add someone in the waiver market or who has been playing in the Chinese league. Yet by doing that they would have Pau’s $6 million on their books next season while likely having to replace him this year with someone inferior. As flawed as Pau might be at this age, he’s still a skilled big man with some range and good timing on blocks. As injury insurance or as an emergency adjustment on a potential playoffs series in which Poeltl is not effective, he could still be useful. And if the Spurs are going to eat that $6 million guaranteed sum, they might as well keep him until the deadline to waive him.

It’s a tricky situation in which the Spurs would probably prefer to maintain the status quo until the summer but might be forced to make a move. If Pau actually starts agitating for minutes publicly or simply asks out, he’d likely be shipped out even if there is not a perfect trade that obviously helps the Spurs. The franchise is not going to want to deal with more trade request drama after what happened last season.

Fortunately, Pau hasn’t expressed huge concerns about his role or a desire for a change of scenery, at least to the media. Maybe Pop will find a way to give him enough minutes to keep him happy, which will make all this premature hand-wringing feel silly. Perhaps Pau will be content collecting checks this year and saving his legs for next season.

Knowing how Pau has dealt with reduced roles in the past and considering that this is one of his last productive years, it’s hard to imagine that will be the case. It might be early in the process, but Gasol and the Spurs could be headed for a divorce. Hopefully it will be avoided, but if it has to happen, let’s hope it will be as amicable and mutually beneficial as can be.