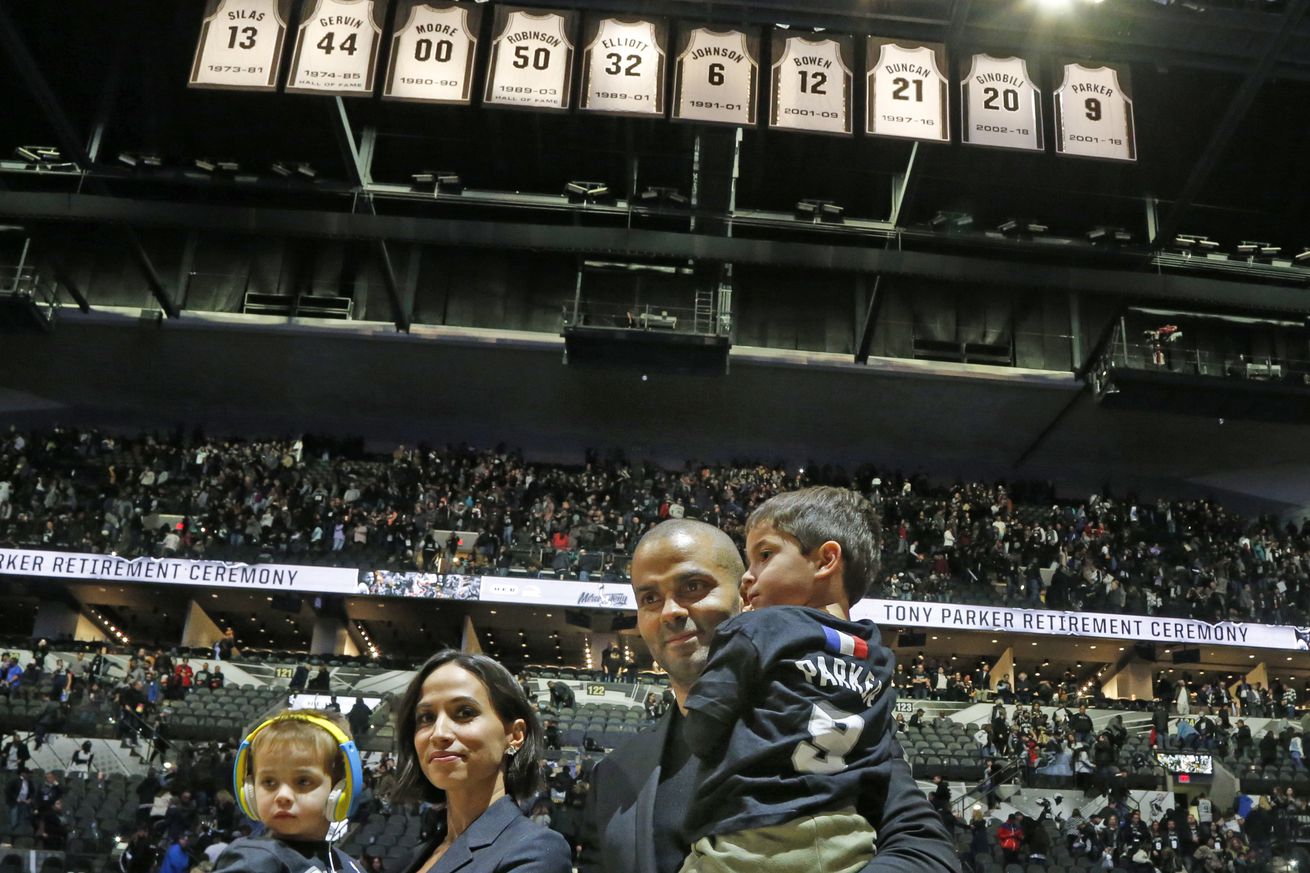 Possibly the best retirement party of the Big 3 Era.

It’s nearly midnight when I get home. The temperature dropped midday nearly twenty degrees. The winds are now blowing hard. Drizzle made the ride home less than advantageous. What would take an individual of my age out on a Monday night when one look at the weather is enough to make me cancel plans?

This was the night they added Tony Parker’s #9 to the list of retired numbers.

The legends of the first championship- David Robinson, Sean Elliott, and Avery Johnson.

Tim Duncan. Manu Ginobili. And now placed in the exact place he belongs next to the Big 3- Tony Parker.

#9 now proudly hangs in the rafters.

There were some wonderful words from Pop, Bobo, The Admiral, Timmy, and Manu.

But the best came from Tony Parker, who spoke from the heart.

And to each of the honored guests in his retirement party, he kept repeating one theme- without these people, he would have never made it into the NBA.

Without R. C. Buford vouching for him, Parker might never have had the second tryout. Gregg Popovich was over him and on to the next perspective player.

Without Chip Engelland, his shot might never have developed and his tenure in the NBA could have been severely shortened.

Without Bruce Bowen and David Robinson, he might not have have felt at home in San Antonio. Acceptance and encouragement were integral to the young Frenchman’s development, and those two made Parker feel at home from the get go.

And without Tim Duncan and Manu Ginobili…well, does anyone really want to imagine that? The greatest trio in NBA history. The most unlikely trio to ever be put together. A nineteen-year-old European guard when international players were not the norm. A spastic Argentinian guard. And a swimmer from the islands who lost his pool due to a hurricane.

Tony said it best when he said that no one would have made this movie, it is an otherwise unbelievable story.

One thing hit me last night about this trio- each has a unique relationship with head coach Gregg Popovich. Tim and Pop are considered the greatest love story in sports, they were simply meant for one another. For Parker, Pop was relentless. He drove the kid and motivated him, but was in his face. Meanwhile, Manu could not be contained and Pop had to let him do as he pleased.

One coach with three distinctive styles of coaching for three of the most celebrated players on the planet.

And all three of their retirement parties were as styled to their personalities. Tim’s quiet and organized. Manu’s heartfelt. Yet Tony’s seemed like a celebration. The highlight reels, the well wishes, the shares all underline the type of player and man Tony Parker has become.

Without knowing, we were all destined to watch that man develop from the boy who entered our life eighteen seasons ago.

As soon as it is available, the footage from last night will be added for those of you unable to watch it in person or on television.

For now, those who did, please share your thoughts.

Until then, MERCI TONY!