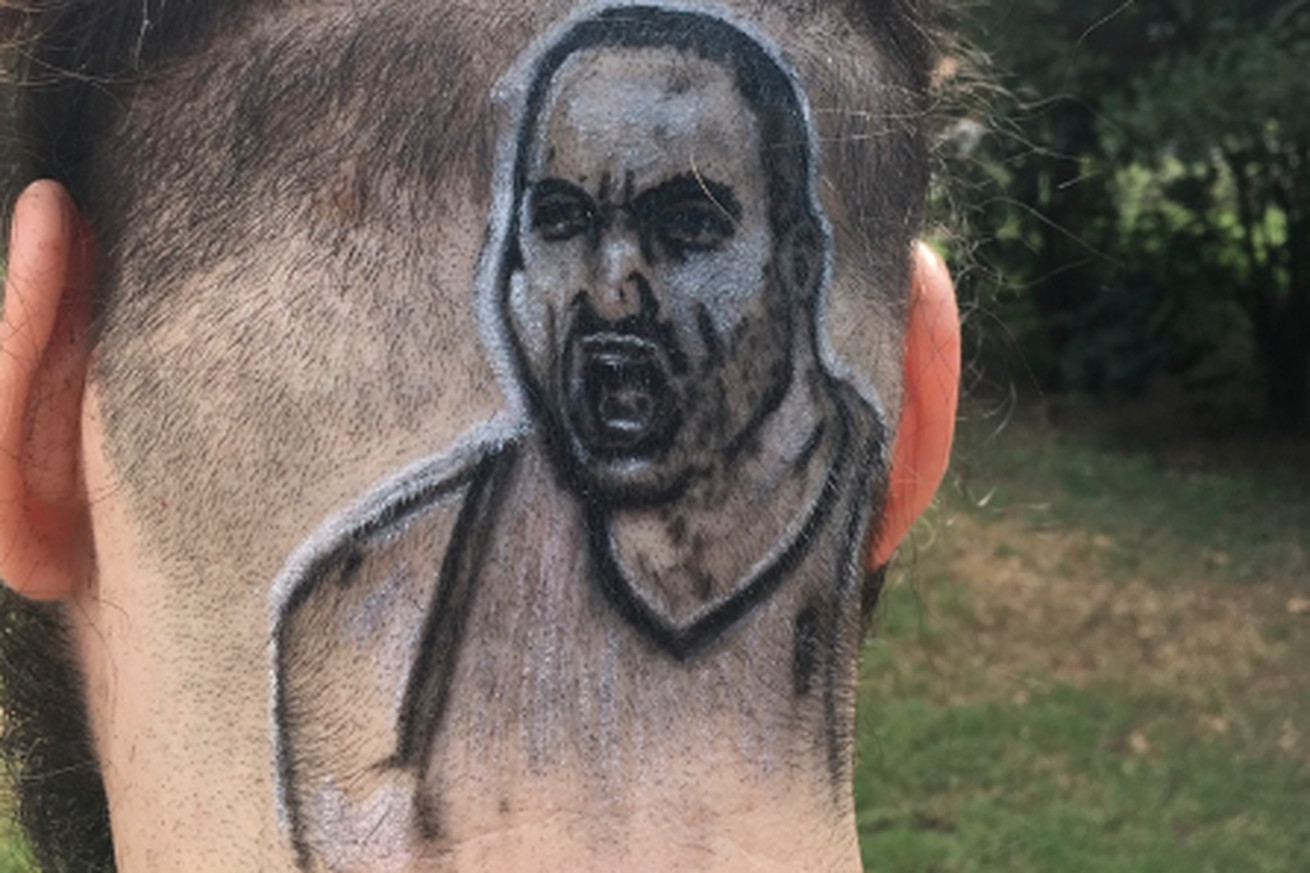 Walking in the door is like a portal to another time. House of Kardz is a straight up original barber shop, replete with old time barber chairs more than a hundred years old filling the space, wall-to-wall mirrors, and conversations that can only be had while men are getting set up.

In the center of the shop, The Joe Barber, is working next a table that is surrounded by scissors, clippers, and razors of varying sizes and shapes. I ask him how many different tools he has.

“I have quite a few, between seventeen and twenty, just the clippers they do different things, different speeds, some are a little sharper,” Joe answers. “I use razors to get into different areas. Some of the blades a little wider. They’re like paint brushes.”

And paint, he does. As you can tell from his YouTube Channel, Joe is a master. Whether it’s a Spurs logo:

Or the entire 2014 Championship team in a “selfie”:

Duncan, Parker, or even Wolverine, The Joe Barber has honed his talent in the arena he has shaped and perfected.

The entire style, from the image on the screen is done free hand. He’s been at this a long time.

The Joe Barber was born Joe Barajas in San Antonio. His first hair style was inspired by something he saw on TV.

“I was watching Inside Stuff and Anthony Mason had gotten designs in his head…and that’s when I decided woah, I think I can do this, so I got my little brother and took him to the restroom and I put the USA Dream Team logo on him and ever since then, I’ve had a thing for hair art.”

Ever since Joe was eleven he’s been cutting becoming licensed. At one point, he was the few barbers designing images into people’s heads. He says that as the trend has become more visible, more people have fashioned themselves hair artists in the same vein. He’s licensed and has flourished at House of Kardz.

“Barbering, the craft itself, kind of got lost, then it bounced back.”

Despite the trend, Barajas receives requests for the Spurs more than any other type of image.

“I would kind of deny people that wanted LeBron, but I wouldn’t do it when they were playing against the Spurs. Because the Spurs have done so well, it did give me an opportunity to be able to do what I do, because I love the Spurs and I have been Spurs fan for so long.

He remembers HemisFair and his first game, where Reggie Miller and the Indiana Pacers torched the Silver & Black.

When asked about his favorite Manu Ginobili moment, Joe has to pause.

“Oh, man, I’ve got too many of those. There’s too many to pick one. I loved it when dunked it on three different Lakers, I loved it when he dunked it on Yao Ming…when he blocked Kevin Durant one-on-one…when he blocked James Harden..when he would throw the ball between different players. He’s done so many great plays that are stuck in my brain, a lot of ‘wow’ moments.”

And so, for me, on the day they were hanging Manu Ginobili’s jersey in the rafters, I made a request:

We talked for a while and then the sounds of the barber shop took over. In one corner a couple of guys are talking religion. On the other side of the shop a television plays a Yankees game, it’s the 7th inning stretch as the sounds of “God Bless America” come wafting across the room. Clippers hum, shape, and design as laughter takes over.

Joe’s got the place. He’s got the technique, and he’s got class. No matter what your cut request, this award-winning hair artist is the right man for the job.

You can book an appointment with The Joe Barber at his shop House of Kardz here.