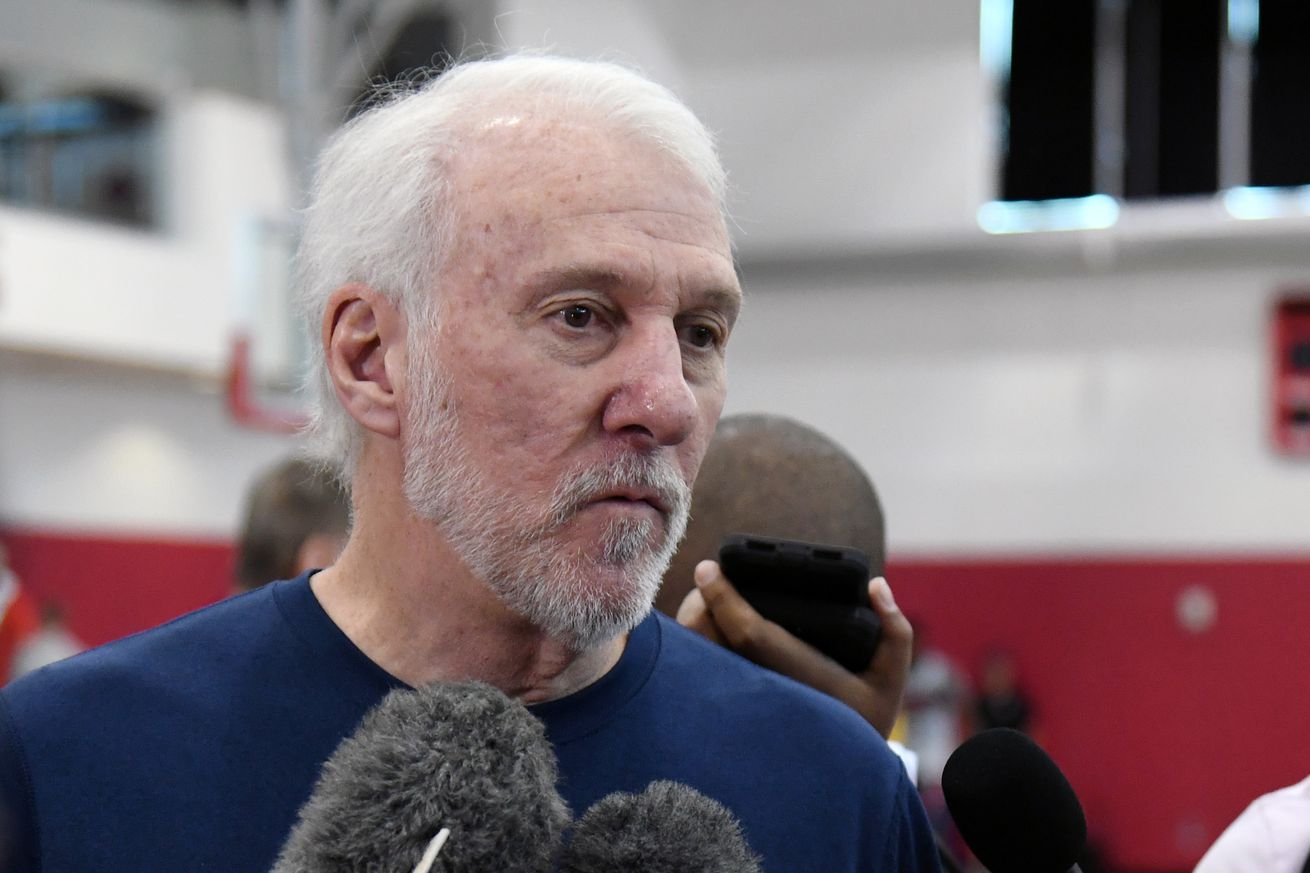 The trademark gruffness was tempered by the sincerity of the event.

I’ve never been in a press pool with Gregg Popovich, but like many of you, I’ve seen enough to know his style.

So imagine my surprise when Pop, after letting Spurs’ guard Bryn Forbes field questions about the Shoes That Fit event at Washington Elementary, stepped right up and generously gave his time. More than that, the Spurs head coach was cordial and fun-loving. Obviously there is a difference between a post game scrum outside the locker room and a few moments after gracing an entire school — students and staff included — with gifts.

Pop was feeling more charitable to say the least, and I, utterly impressed, felt obligated to include his five minute entire interview.

Q: Does this ever get old coming seeing these kids faces out here?

This is probably my favorite event in the community for the things we get involved in because the kids are so darn happy. It doesn’t matter what’s going on in your life when you see all those kids so happy. You actually remember when you got a pair of sneakers – we called them gym shoes when we were kids – you thought you were the coolest person in the world, and everyone of them in there feels like that. So to see their faces and hear them yelling and screaming is very special. It makes you a very happy person. And then the teachers got a surprise. They got their shoes too because they do a little bit of work too, I think, so they deserve that, so it worked out well.

Q: Is it nice to have your guys out in view like this, to not always be basketball all the time?

Yeah, basketball is boring. You pick-and-roll, and you run, and you jump, and you shoot shots and that’s great and that’s how earn our living. But you talk about satisfaction and feeling good about what you do, it’s the community things that our players have always been great. That’s why today – Bryn’s never done this, so I wanted to bring Bryn out here to this event – Derrick White came last year, so we try to bring somebody different. But the players understand. San Antonio’s a family community and they’re as responsible and need to be and know they need to be on and off the court, so that’s never a problem, getting players here and there to do what we do.

Q: It’s something, I guess, that we kind of take for granted – new shoes, meals, something like that – is that something you feel like more people kind of need to be more aware that there’s a need in the community?

Well, you know there always seems to be a need. You can take the Food Bank for example. Eric Cooper does such a good job there with his staff and it seems like every year there’s more need. With everything that everybody does in this town for everybody else, you think it would go the other direction. It’s the nature of the beast. There’s always people that don’t have what they need. It’s incumbent upon everybody else, all of us, who do have means to share. If you can’t share you’re pretty worthless.

Q: You often talk about standards on the court, the standards off the court as well as the Spurs culture . . .

I think anybody that we sign or draft understands that we expect a class act off the court as much as on the court and that’s never been a problem. We try to do our work ahead of time to try and bring in people who understand that. If you have to convince someone of that, you probably have a problem, so we try not to have that problem.

[Now it wouldn’t be an interview with Pop if he didn’t pick on a journalist, but I must say, he was smiling and teasing the whole way through this next response.]

Q: You may have touched on this, but can you just describe the twinkle in the children’s eyes when they see you and the shoes?

You’re right, I did talk about that and you’ve been there the whole time, right? But you would like me to do that again? You don’t know me very well.

Q: There aren’t that many organizations in the entire world who can have an impact on the community the way the Spurs can, is that a sense of responsibility?

Of course, we understand it’s a gift to be able to be in a position to be responsible enough to give to other people to make them happy to make them more whole, and in this situation with Shoes That Fit, I didn’t know anything about it until [the organizer], who put this all together with Shoes That Fit, called me and asked me to be part of it. And I really didn’t know what it was until it got described. I don’t know how many years ago we started doing this. But the first time I did it I realized what a special program it is. And now, she does that across the country. We were able to get the police force involved today. Again, she’s done that with the LAPD, and it’s obvious you can see what a great outreach that is for the policemen to be with the kids in there and they see the police in that sort of environment and understand we’re all together in this trying to make out community better. So having the chief [McManus] bring his guys and gals out here today was very special and we’re very thankful that he did that.