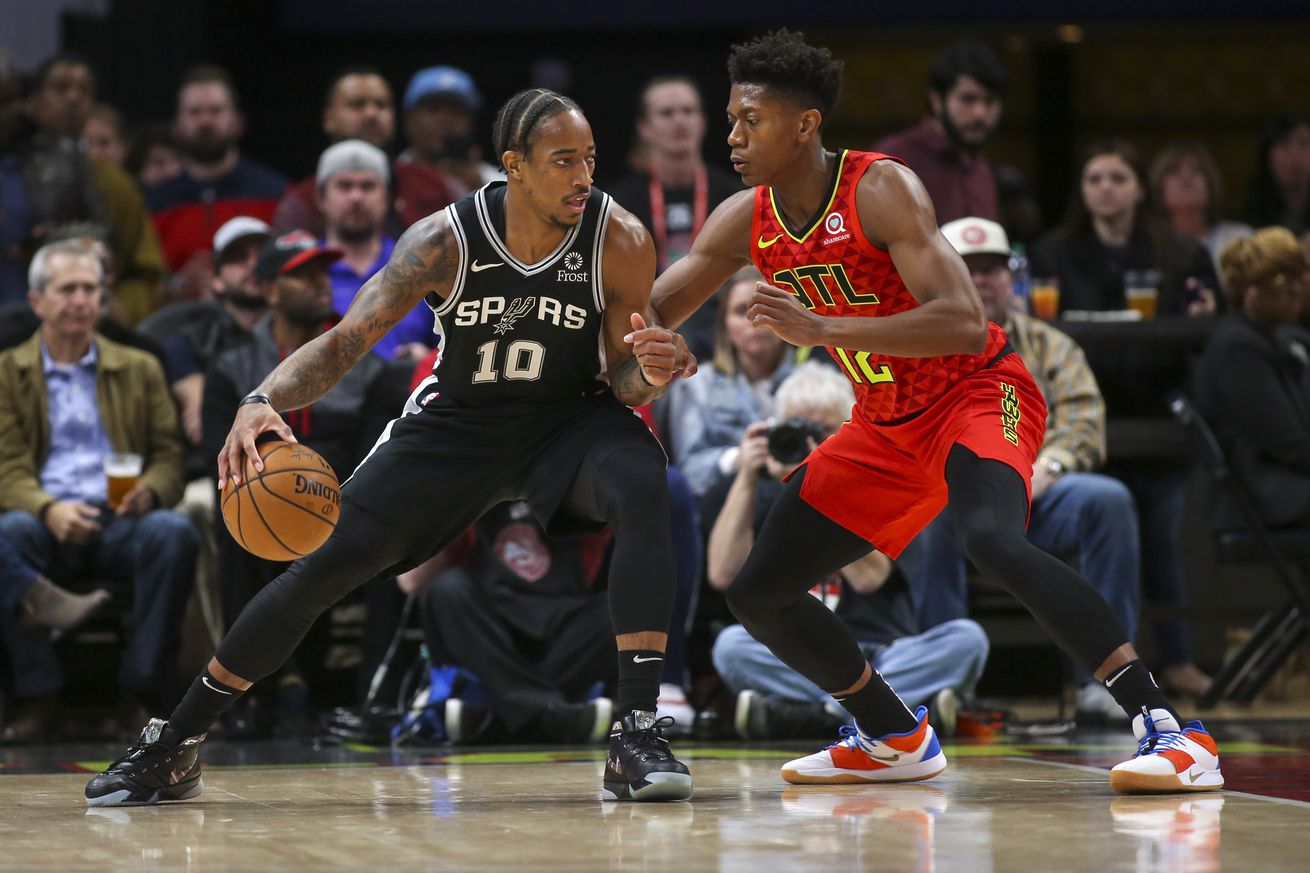 Unlike last year, when DeMar DeRozan burst out of the gate with a series of eye-opening performances that made him the main story on a nightly basis, this season’s first 8 games have largely seen the Spurs’ leading scorer take a secondary role as far as narratives go. Focus has rested instead on the reintegration of Dejounte Murray and the ensuing two-point-guard problem, Trey Lyles starting, LaMarcus Aldridge’s seasonal October/November slump (which looks to be over) and the continued minute load of one Marco Belinelli.

But make no mistake, the 2nd year Spur is still leading the team. He’s played more minutes, scored more points, and taken and made more field goals and free throws than anyone on the team. He’s also tied with Dejounte for 1st in assists, tied with Patty Mills for 2nd in steals, and 4th in defensive rebounds. Whatever his limitations, when DeMar’s on the floor, he gets in work.

Aside from the sheer weight of his production, there’s also something interesting going on with DeMar’s contributions. Playing alongside an actual point guard for the majority of his minutes has had what appears to be a very understandable positive impact on DeMar’s efficiency. It’s still too early to draw sweeping conclusions, especially because the effects are still relatively small, but there’s a chance DeMar is on his way to the most efficient season of his career.

First, DeMar’s usage is down from nearly 31% in 2018-19 to just below 28% this season, per Cleaning the Glass (CTG), despite turning the ball over much more often. That decrease is largely due to him shooting the ball less, which parallels his drop in assist percentage. The declines in both of those number indicate DeMar is taking less of a playmaking role, something that has been obvious to anyone watching the games as Dejounte and Derrick White are both playing traditional point guard roles when they’re on the floor.

That slight adjustment to his responsibilities appears to have freed DeMar from some of the heavier lifting that he struggled under last season. So far, for instance, DeMar hasn’t taken a single shot in the last 4 seconds of the shot clock after averaging 1.4 per game last year and hitting just 31.7% of those attempts. Whether that’s a fluke or a sign of that shift in roles is too early to tell, but the impact to DeMar’s efficiency is readily apparent.

His 51.6 eFG% and 56.4 TS% to this point would both be career highs were he to carry them through the season. Some of that has to do with DeMar making a few more long midrangers than would be expected, but it also has to do with a slight uptick in both the frequency and accuracy of his attempts at the rim.

Most of those attempts have come from drives and in transition, but DeMar has another source for easy attempts at the rim that has been more prevalent so far this season: his ability to attack a smaller guard in the post early in the possession. The Spurs appear to have leaned into that part of DeMar’s game. His overall post up attempts have increased only slightly from 2.2 per game last year to 2.5 this year, but his points per possession has taken a dramatic leap from just .9 PPP in 18-19 to 1.2 PPP in 19-20. That puts him 4th in the league in post up efficiency, by the way.

It’s still early, obviously, and there’s a decent chance that teams will work to take these easy opportunities away as the season progresses. There’s also the chance, though, that playing alongside one of Dejounte Murray and Derrick White most of the game means DeMar will have an easier matchup to deal with from time to time. Again, whatever DeMar’s limitations, he typically draws the opponent’s best wing defender, an assignment that can challenge him at times.

But if he’s on the court with another dangerous ball handler, especially one who is providing a large chunk of creation, that could complicate coverage schemes. Not only will DeMar get to be the one who attacks a defense in rotation more often, rather than the one who breaks it down in the first place, but he’ll also get more opportunities to work against a less capable individual defender. And if that’s the case, look out, because he’s going to abuse some folks down low. DeMar might not be the leading story of this Spurs’ squad, but based on the evidence at this point, that seems like it might be a good thing for both him and the team.