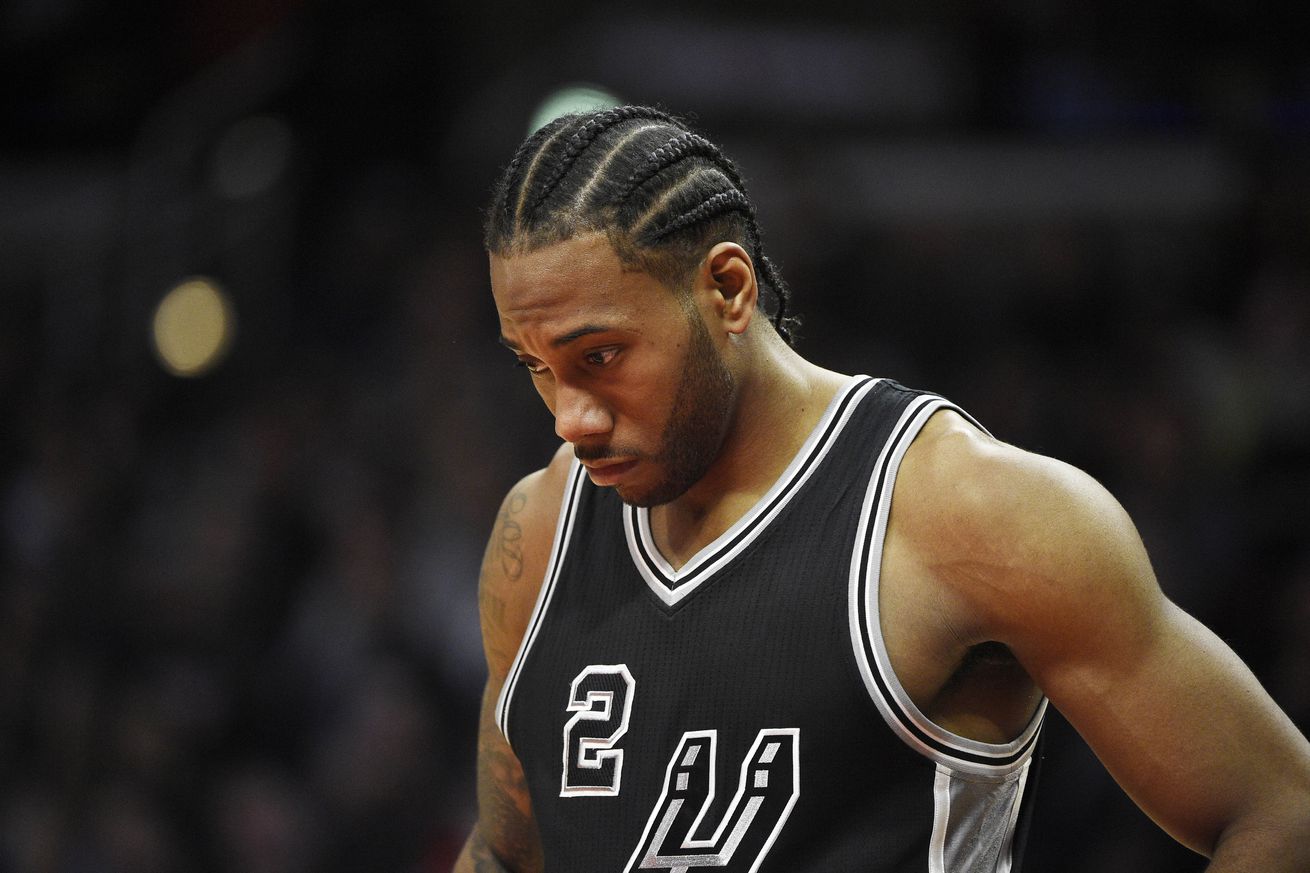 With the season in the books, it is time to evaluate San Antonio’s needs prior to the 2017 NBA Draft.

Given the state of the San Antonio Spurs’ roster, what do they need, and is that player best found in the NBA Draft, as a free agent, or through further development of an existing player?

The Golden State Warriors are the 2017 NBA Champions, and the road to the 2018 NBA Championship runs through Golden State, with the quartet of Kevin Durant, Stephen Curry, Draymond Green, and Klay Thompson.

Although the sample size is too small to render a definitive conclusion San Antonio’s 2016-2017 roster, during Kawhi Leonard’s cameo, seemed to be competitive with Golden State in the playoffs. Postseason basketball is entirely different from regular season basketball, and the Spurs were having their way with the Warriors up until Kawhi was taken out of the game. Without the team’s best player and the acknowledged leader, the remainder of the series was a forgone conclusion. This is not an indictment of the rest of the team. It is simply an acknowledgement of the fact that Leonard is one of the best players on the planet, and no one on the Spurs roster can duplicate his impact on either offense or defense.

Leonard is clearly the cornerstone of the Spurs’ roster: a legitimate #1 player on a championship caliber team, and is the only absolutely untouchable player on the roster. LaMarcus Aldridge, without having a spectacular year statistically, played very well, and was among the league leaders in defending at the rim. While the regular season is not the same as the playoffs, winning 128 regular season games since the arrival of Aldridge is an excellent starting point.

Kawhi and LaMarcus are the foundation of the current Spurs roster. Danny Green brings elite perimeter defense every night, and on some nights is very hot or very cold from 3-point range. Given his salary, he isn’t tradeable because he gives too much value for what he’s making to consider moving him. Tony Parker, given his injury, is not tradeable, and he will never be waived. Dejounte Murray shows excellent promise, and has a very affordable rookie-scale contract. Combined, these four players are also basically untradeable.

Pau Gasol demonstrated flexibility in coming off the bench and supplies the bench unit with some much needed scoring punch. He has not yet made a decision on his player option for the next season, but is likely to accept. Davis Bertans played very well as a rookie, and shows no hesitation when shooting from any range. His defense needs to improve, but on his salary, he is clearly very affordable. Kyle Anderson does a lot of different things, from playing defense to ball handling to initiating offense. His 3-point shot needs to improve, but he has made steady progress. While all three are available for a trade, they each make so little that the Spurs would need an excellent return, so that makes such a trade very unlikely.

Bryn Forbes is on a non-guaranteed contract for next season. Given his inexpensive contract, his improvement in both Austin and San Antonio, and the strength of the upcoming NBA draft, he is a likely untradeable. In the event of a roster limit squeeze, he could be waived, but is a likely to be given a fair chance to make the roster. So far, we have accounted for 9 of 15 roster slots for the 2017-2018 NBA season, with a total predicted salary of $87,175,703.

Livio Jean-Charles, the Spurs’ 2013 first round draft pick was released at the end of training camp, spent the season with the Austin Spurs, and played 17 games with ASVEL in France (Tony Parker is the owner). At ASVEL, Livio Jean-Charles played extremely well. ASVEL was 13-12 and not in the playoffs when LJC arrived, finished 6-3, knocked off league leading AS Monaco in the first round of the playoffs, and suffered a very narrow 3-2 series loss to Strasbourg after leading 2-0. The entire ASVEL-Strasbourg series was decided by 5 points over the 5 game series. Livio Jean-Charles is owed $1,242,240 in guaranteed money for 2017-2018, but this could be partially off-set by Jean-Charles’s ASVEL contract due to a detail of the CBA. Or Livio Jean-Charles could be brought back to the Spurs to occupy Joel Anthony’s former roster slot, saving the salary that would otherwise be “dead money”. However, this seems unlikely. Assuming no reduced salary, this puts the Spurs at $88,417,943. Using a projected salary cap of $101 Million, and needing to fill up to 6 “regular” roster slots does not leave much money for free agents even if all remaining players are renounced.

Manu Ginobili has not yet decided on his future. Speculation about his potential salary is impossible, but is also critical to understanding if Patty Mills, Jonathon Simmons, and/or David Lee can be retained. Mills is a free agent, and is likely to command a substantial salary increase. Patty already has an NBA ring, and deserves a substantial pay raise. The Spurs may be unable to provide him the financial security he has earned. Jonathon Simmons is also a free agent, and may also command a significant pay raise. David Lee is a veteran big man who is worth substantially more than his player option salary of $1,605,967.

The problem is that as this roster is currently configured, all three of these players occupy low salary roster slots at the rookie free agent minimum (Simmons), near the veteran minimum (Lee), or a fringe roster player salary (Mills). Dewayne Dedmon has already opted out of his player option for next year, making him a free agent. Dedmon’s roster spot is also a low dollar position, making his return extremely unlikely. Joel Anthony occupied a pro-rated veteran minimum contract in 2017. His return also seems unlikely.

The new NBA Collective Bargaining agreement allows for teams to have two “two-way” contracts, worth between $75,000 up to $278,903 if the player is called up for the maximum allowed 45 days. Given that the Spurs typically play deep into the playoffs, it would seem advisable for the team to use at least one, if not both two-way contracts. One thought might be to use one “two-way” contract on a domestic player, and one on a foreign player from a league with a history of not paying players on time or at all.

Adam Hanga, the Spurs second round draft pick in the 2011 draft, has been rumored to be ready to sign with San Antonio after successfully completing his last contract with Baskonia in Spain and being named the EuroLeague Best Defender in 2017. Hanga would likely sign for a salary either at the rookie minimum, or slightly above. Given the challenging salary cap position of the Spur, I would guess that $2,000,000 is probably around the upper limit. While Bertāns signed for the rookie minimum to launch his NBA career, Hanga is older and will probably be more expensive. Hanga is likely the first replacement available for the loss of either Ginobili or Simmons.

Nikola Milutinov was drafted with the Spurs first round draft pick in 2015, and played in Greece with Olympiacos in both the Greek League, as well as in the EuroLeague. Olympiacos lost in the final to Fenercahce (Turkey), but Milutinov scored 10 points with 4 rebounds in 14 minutes in the championship game. Although Milutinov is not elite in any one area, he is a well-rounded, experienced player that is likely ready for the NBA. My expectation is that both the Spurs and Milutinov would like for him to play with the Spurs in the NBA in 2017-2018. Milutinov would be paid the first round salary corresponding to his draft position, $991,600. In rough terms, Milutinov would be taking Dewayne Dedmon’s roster spot from 2016-2017, but leaving over $1 Million for another player.

Given these assumptions, the Spurs may not even have a roster spot to sign a first or a second round pick if Ginobili, Mills, Simmons and Lee all return. In the event of a quality, “non-stashable” first round draft pick under these conditions, Forbes may have to be released. If all four depart the Spurs for greener pastures, the Spurs would likely need both a veteran point guard to replace Mills, and a veteran “big man” to replace Lee. However, the Spurs would not be able to exceed the salary cap to sign them, likely requiring such players to play for the veteran minimum or something close, or through use of the various exceptions (Mid-level, Bi-annual etc).

In this scenario, there would be up to two roster slots available for either 2017 draft picks, or “stashed” players from previous drafts. Given that Hanga could be seen as a replacement for Simmons, and Milutinov would be a replacement for Dedmon, with Mills and Lee both replaced by veterans, then these two roster slots would likely be designated for an offense initiating wing player and a “big man”, and not necessarily a point guard. Leonard, Anderson, and Forbes would all be possible ball handlers in addition to Dejounte Murray and a veteran back-up.

So what do you think? Should the Spurs target a wing and a big man in the 2017 NBA Draft, or do you think another position is of higher priority? Share your thoughts below.