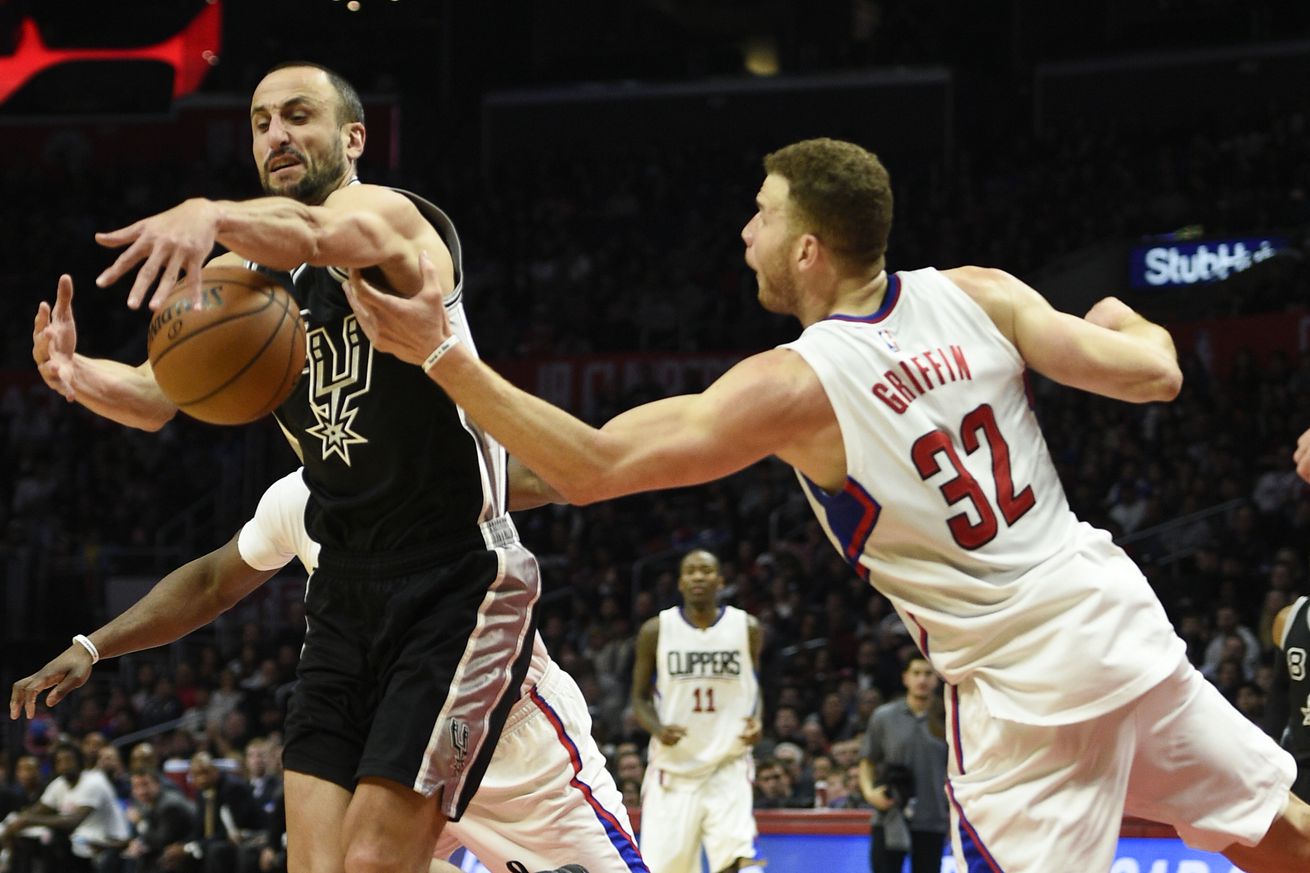 When a game like last night’s gets ragged with missed shots and bad passes, a stabilizing presence must step forward, and that person in this game was Manu Ginobili. A winning player’s greatness is about more than how many points he scores on a given night (or twenty), but also how that player elevates himself to meet the whole game time situation. He must have an opportunistic mind set and a willingness to preform at the highest level in all aspects. At the end of game presser, one could hear: “The first game after the break is usually hard for everybody,” Manu said, “and we reacted very well.”

You reacted very well, Manu, so lets take a look at some of those plays which illuminate your greatness.

#1 We start off with a Manu steal and a two handed pass to Jonathon Simmons who finishes with a dunk. This is Manu being opportunistic at the highest level. Individual effort for team basketball.

#2 Here we see Manu with a cross court pass to Pau Gasol after DeAndre Jordon leaves Pau because of a Manu drive threat. Jordan is too late on the recovery and Pau knocks down the three. This play is a result of Manu’s patience and complete court awareness at the time.

#3 Through out his career, Manu has made so many outstanding plays, and this one has be included in that list. It is a no look, back to the basket lay-in thanks to a great pass from Pau.

#4 With the third quarter winding down, Manu shows his patience in setting up the last shot. With the help of a fantastic David Lee screen, Manu steps in, shoots and makes the three.

#5 In this breakdown we see Manu stating the play high waiting for a Dewayne Dedmon screen, and then we witness a perfectly executed pick and roll.

#6 Let’s finish up with another steal. This time Manu steals by presuring without fouling Chris Paul and feeds Tony Parker. The play finishes with a Kawhi Leonard dunk that gets all the attention but would not of happened without the initial steal by Manu.

This was a game the Spurs won with a lot of help from Manu Ginobili, who had a +23 in the plus minus column, and let there be no doubt, he earned the number. Now we look forward to the Spurs next opponent: a Los Angeles Lakers team under new management on the same court Sunday afternoon at 2:30 to finalize this year’s Rodeo Road Trip.