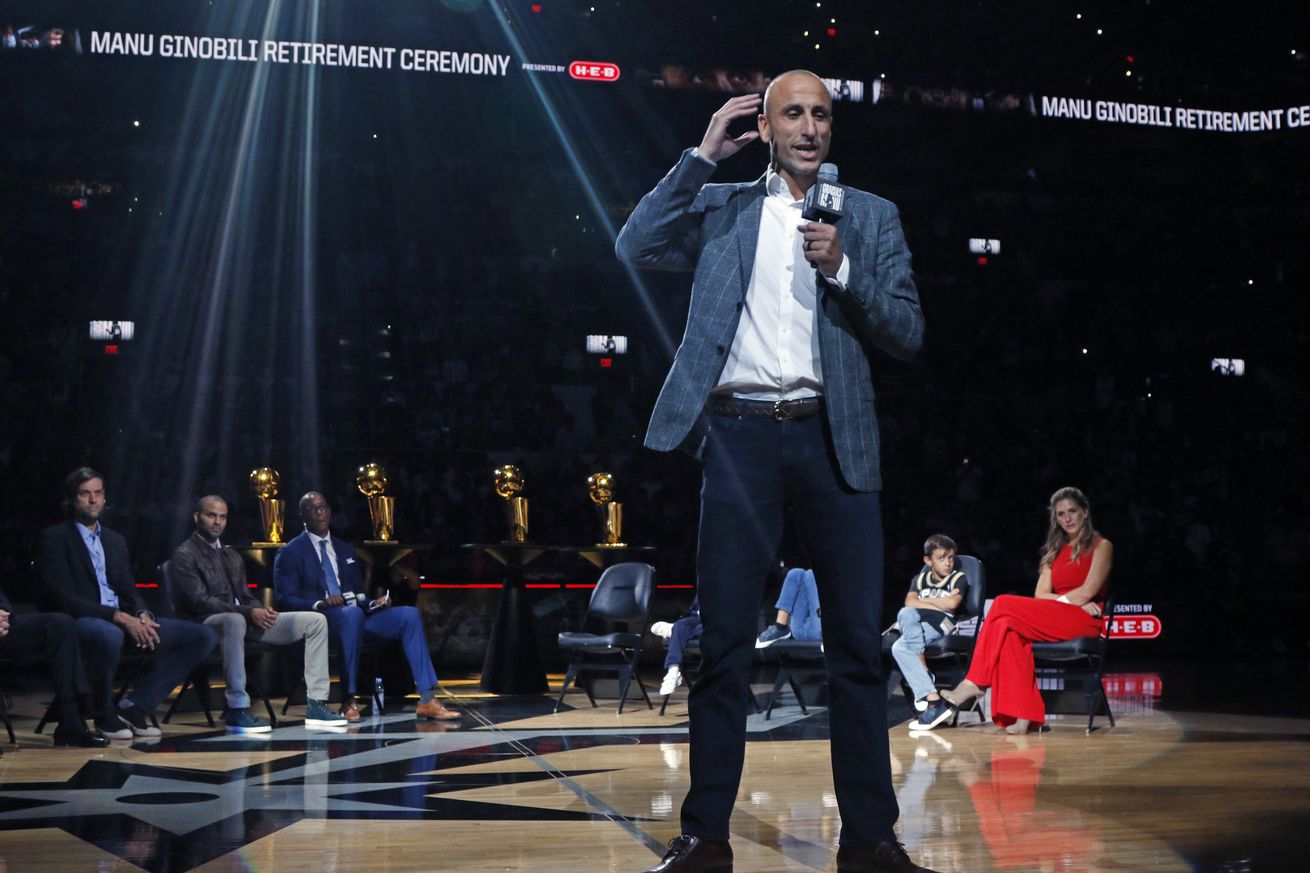 On Thursday, Manu’s former coaches and teammates reflected on the moments and qualities that comprised one of the greatest all-around careers in the history of the game.

On Thursday, a man who served as an ode to basketball at its purest received a fitting tribute in return, as faces from the present, past, and other threads of his expansive playing career came together to honor the singular Manu Ginobili.

“Tonight, we are all very happy for him [and] for ourselves, for having competed alongside him so much,” said Spurs assistant coach Ettore Messina, speaking ahead of the game versus the Cavaliers — which, it was easy to forget, had to take place beforehand. “We’re also sad because it’s part of our lives that ends. For him to be responsible for all that, it’s incredible, for one person.”

The night served as a bookend of sorts for Messina, who first coached Ginobili in Italy 21 years ago and, upon joining the Spurs, maintained a unique connection with the player, warming him up before games. He imparted an anecdote from Ginobili’s early days:

“I don’t know if you know this story — we signed him in Bologna after two good seasons. We sign him and he is the replacement for Sasha Danilovic. Sasha Danilovic retires after the Olympics in September, says, ‘I can’t anymore,’ and Manu becomes our fifth starter. And every day was incredible. Every day he would do something new, different, but he had his tough times. The first game of Euroleague, we played on the road and we lost the game in the end, and Manu didn’t score one field goal — only four or six free throws — and when I was leaving the court I told my assistants, ‘If this is our go-to guy, we’re sunk.’ And six months later, he’s the MVP of the Euroleague. Every time he confronted something more complicated, he might struggle, of course, but also, he would put it in his head and, the second time, he was perfect.”

From taking in everyone from Messina, Gregg Popovich and R.C. Buford to Fabricio Oberto, Boris Diaw, Tim Duncan and Tony Parker, it was clear there’s no single common denominator that made Ginobili who he was — one of just two players to ever win NBA, Euroleague, and Olympic championships. But as each praised those multitudes, a few themes surfaced, highlighting the mind and spirit that fueled the Spurs great.

“Let’s just say he gave me more books than I gave him,” said Pop about Ginobili’s intellectual interests. “He is definitely the most curious player that I’ve ever been around. And it doesn’t matter what the topic is — he’s interested in black holes in space and quantum physics… it could be religion, it could be finance… he’s got a friend who’s a mathematician who comes over from Argentina a couple of times a year and talks to him about different mathematical equations or riddles that inform economics, and Manu will want to discuss this with him. He’s a very multifaceted human being for sure.”

“It’s unbelievable how passionate he could be in different things,” said close friend and former teammate Oberto. “That takes Manu to another place. You can see Manu playing physical or athletic, or all the movements that he made, but his key was his brain.”

“He was fearless,” said Pop. “And was so focused that he didn’t need anybody else to get to the point where he had to be ready to do A, B, or C. He was already before you even thought about being ready. Big-time self-motivating individual.”

Oberto noted that Ginobili visited him regularly through his 2009 heart procedure, while Ginobili shared that he was with Oberto, “in the Amazon”, when he learned that he’d been drafted by the Spurs back in 1999. Similarly, as much as questions often veered towards basketball things, the night also became a showcase of the real connection between giants — famous athletes yes, but also literal giant men — whose friendships elevated how they played and were forged by what their experiences off the court.

Diaw, who rekindled his “gameday lunch” crew with Ginobili and Patty Mills earlier in the day, added to it: “It was always great to hang out with Manu, because he always had so many sets of interests, and talking about so many different things all of the time.”

According to Patty Mills, Thursday’s gameday lunch allowed the group to “pick up where we left off so many years ago:”

“All those many seasons and many games on the road of doing that,” Mills said. “I think that’s why we enjoyed it so much, because it is a long season, and there is so much goes into playing an NBA game and an NBA season… Those moments were our escape. Those lunches felt like we were another world away.”

It’s hard to quantify how Manu The Person’s intangibles, the camaraderie, will, and boundless curiosity, translated into the Manu The Player — one can overthink basketball, after all, even if Ginobili rarely did. But given how much the two intersect in conversation, and in the memories of those around him, you can assume quite a bit carried over.

“The majority of my career was away from home,” the 41-year-old said, standing beneath the five championship banners — four of them illuminated for his time in San Antonio. The spotlight shined so bright on the court that one of his sons seated behind him, Dante, grumpily shielded his face from it. For the elder Ginobili though, the stage has never been too big, no spotlight too bright, and he spoke passionately to his Argentinean fans about a heart that always sensed the distance from home, and a head that never forgot what that meant. “But being so far away, I knew of your effort to watch my games, going to bed at three, four in the morning when your alarm was going to go off at seven for you to go to work. I knew of your screams at the TV, your insults, I knew of your celebrations — all of this got to me. And it pushed me a little more.”

Ginobili’s presence may or may not have pushed the Spurs to one more win, but it at least gave the requisite heft to a much-needed comeback, following a less-inspiring opening 24 minutes that saw the team down 53-44.

“If nothing crushed me more, it was Pop telling us at halftime that we weren’t playing hard enough. If there’s any way to honor Manu on a night like this, it’s to make sure you’re balls to the wall and you leave it all on the line. I’m happy we did that in the second half.”

It was Mills who hit the clinching shot — a Manu Moment of sorts, he called it afterwards — putting the Spurs up 114-110 on a three from the corner with 14 seconds to go before erupting in celebration.

“I think that guys, whether you’re young or old or somewhere in between, you understand that you gotta play with passion, and you gotta play with heart, and you gotta wear your heart on your sleeve. And that’s what Manu did so well, and what made him great. He was emotional, and everyone saw it, and when that happens, you make the team better, because your teammates start to play that way.”

Mills didn’t bother looking back to his former teammate in the crowd after making the shot — “I knew he was looking,” he said. Of course Ginobili was, having risen to his feet alongside Duncan and Parker, the three celebrating victory with a familiar fervor one more time.