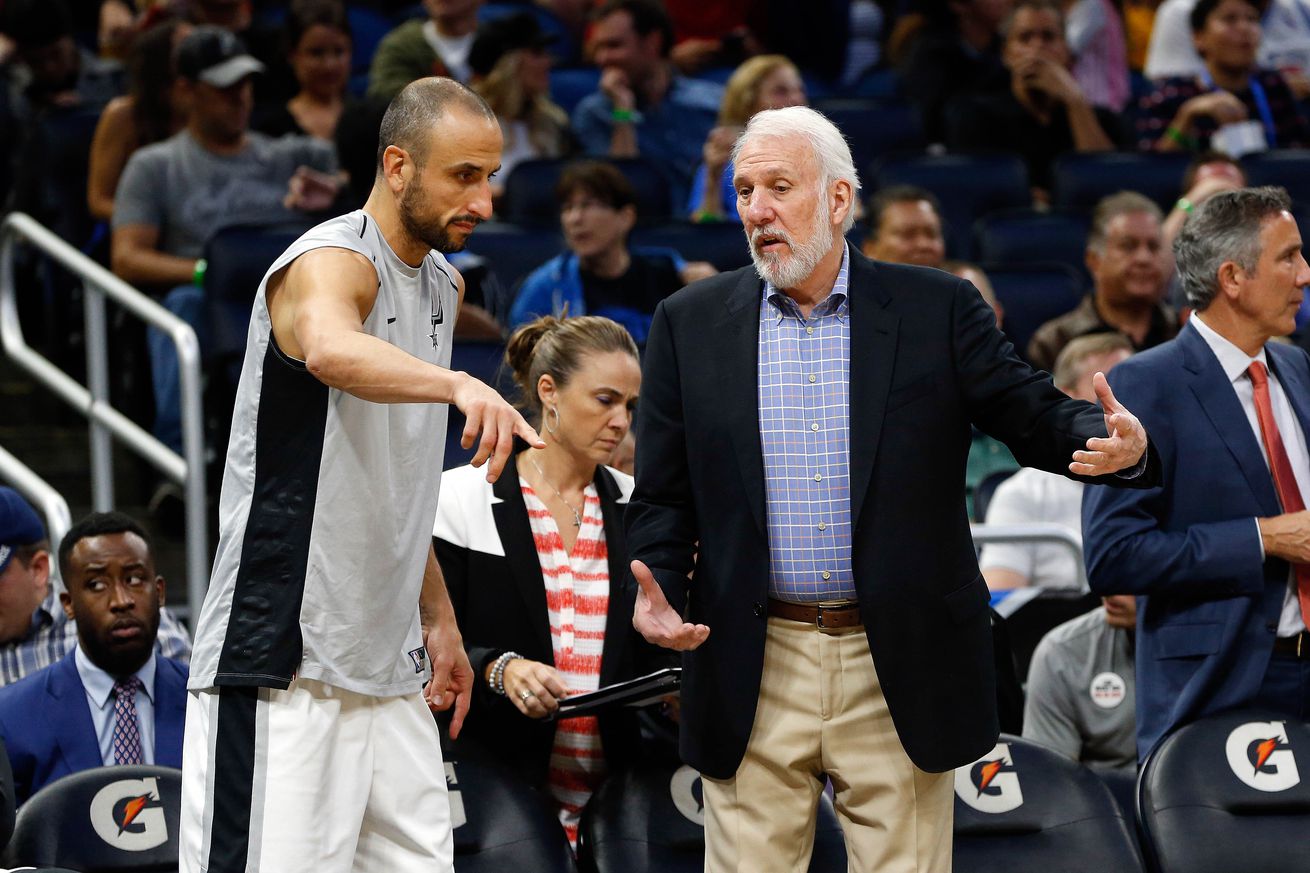 Manu reportedly passed on the opportunity to join Tim Duncan and Gregg Popovich on the bench. Hopefully he’ll change his mind soon.

Tim Duncan wasn’t the only Spurs legend who was asked to join the coaching staff this summer. Manu Ginobili also got an offer to help Gregg Popovich on the bench but decided against it, according to The New York Times’ Marc Stein.

Since Duncan fortunately opted to become an assistant coach and Will Hardy and Becky Hammon were already on board, Manu’s decision didn’t leave the Spurs hanging. Ginobili is still enjoying the free time he long coveted to travel with his family, so it’s not exactly surprising that he chose to remain retired.

Hopefully he’ll reconsider some time soon, because having Manu Ginobili back in the AT&T Center in an official capacity would be fantastic, on many levels.

For years Manu seemed to be one of the few active players who had the leadership ability, basketball knowledge, and coaching temperament to pace the sidelines after retirement, so it makes a lot of sense for the Spurs to try to recruit him just a year after he stopped playing. We all remember that time he drew up a game-winning play in preseason, but equally impressive were the times in which he’d talk strategy with Gregg Popovich during timeouts or call his teammates to huddle during games to motivate and remind them of what they needed to do. Both in the NBA and with the national team, he was ever the leader.

There was also something innately intelligent and innovative about his game, which should inform his coaching philosophy if he ever makes the leap. Before the advent of Moreyball and James Harden, Manu was eschewing mid-range jumpers for three-pointers, shots at the rim and free throws. Yet he wasn’t rigid about it, and his approach always featured a lot of improvisation with a healthy dash of risk-taking. Ginobili prioritized efficiency but never fetishized it. He understood the importance of analytics but seemed to consider basketball as a holistic system which includes parts that defy quantification.

There’s no better combination for a young coach than natural charisma and a preference for efficiency without sacrificing creativity. Manu’s obvious tools for the job made it the more baffling that he typically outright dismissed the possibility of pursuing a career in coaching. Now it seems that he would at least consider jumping in, which is encouraging. But even if roaming the sidelines is not in Ginobili’s future, the Spurs would be wise to at least try to get him into the fold somehow, with a front office role seeming like the most realistic option if he doesn’t want to commit to the coaching grind.

A lot of the same qualities that would make Manu a good assistant to Pop would also make him a good team official. There seems to be some hesitance around the league about hiring former players for important front office positions nowadays, but as the success of Sean Marks rebuilding the Nets recently proved all that matters even in this data-driven era is getting the right person for the job, no matter their background. Just as Monty Williams, another member of the Spurs family who was hired as VP of Basketball Operations in 2016 without previous front office experience, Ginobili could learn under R.C. Buford and beef up a crew that typically loses big names as often as the coaching staff.

Regardless of what job with the Spurs, if any, Ginobili ends up taking, getting him involved would be a huge win for San Antonio. Bringing Duncan back was a fantastic first step in re-establishing the organization as one who doesn’t see players who are loyal to it as disposable but instead views them as an integral part of its fabric. It makes the Spurs an easier team to root for even as faces change in the roster and it should help restore the sheen to their reputation as a player-friendly franchise that was lost in the Kawhi Leonard saga.

Beyond any actual benefits to the organization, there’s a more visceral but still valid reason to want the Big Three back in some capacity: it would just be cool for fans who enjoyed them as players to see them around the team on a daily basis. Duncan is already in tow and hopefully Manu will get bored with visiting idyllic tourist locations soon and follow suit. Tony Parker is probably busy with his own team in France, but I’d be fine with him being offered a mostly ceremonial consultant title if it means I get to see photos of him chatting with Duncan, Ginobili and Popovich in the practice facility.

Fortunately Spurs fans are lucky enough that our living legends would likely not only serve as reminders of a better time if they returned in a different role but actually seem to have the qualities needed to eventually help out. Ginobili could have genuinely been a good addition to the coaching staff if he hadn’t declined. Hopefully he’ll change his mind soon and we get to see him, along with Timmy, help usher in a new era of Spurs basketball.

Manu Ginobili would be a great assistant coach for the Spurs
Source: Pounding The Rock