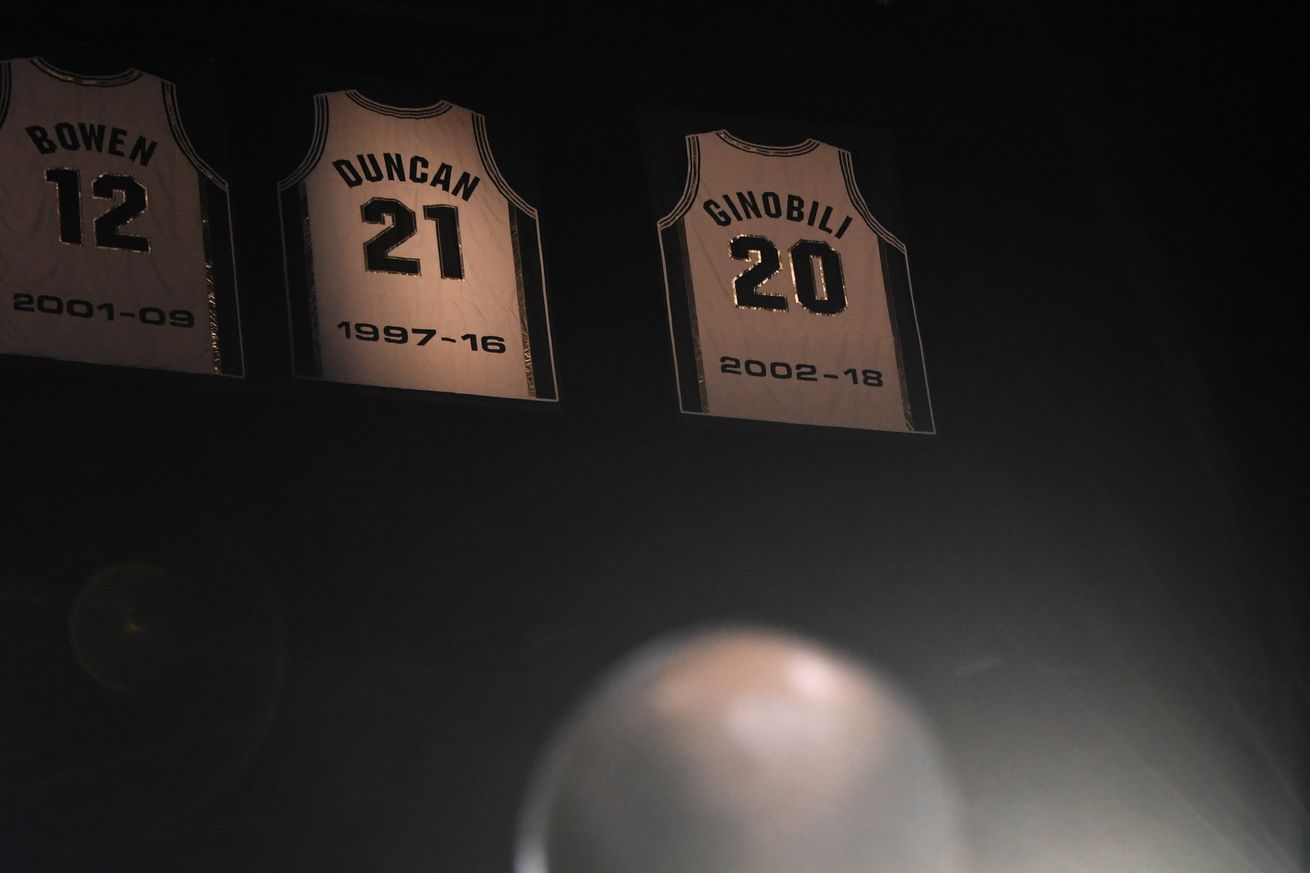 The ninth Spurs player to have his number retired is the most beloved worldwide athlete of the NBA.

Manu Ginobili — excuse me, Emanuel Gin-o-billy as he was known on draft day — is one of the most unique players to ever play in the National Basketball Association. His style and dedication to the game added fluidity to a league that had boxed itself within its 94’ x 50’ frame. If nothing else, Manu brought the Euro step to the big league and altered the game forever.

With one of the more brilliant international careers of all time, Manu Ginobili is one of only two players to win an NBA title, a EuroLeague title, and an Olympic gold medal. As a member of the San Antonio Spurs, he won four NBA Championships alongside Tim Duncan and Tony Parker, making them the winningest trio in NBA history.

Perhaps his most Spursian trait was agreeing to come off the bench at the height of his career, taking selfless sportsmanship as well as the team’s dynamic to an entirely new level. Not only did this create a bench that strengthened the overall team, the Spurs’ team-first principles and competitive longevity was set in stone, to a point that persists today.

This series honors the numbers that have been retired by the Spurs. To date, there have been ten players whose impact on the culture of San Antonio has been so permanent that their personality and style of play is part of the Spurs lexicon. Each player is deserving for more than statistics, a game winning shot, or a championship. These are the numbers that swell in the hearts of the truest Spurs fans. No matter who else wore that number, the jersey in the rafters belongs to the legend who hung it there.

Here are some names that might ring a bell: Jim Burns, Dennis Holman, Donnie Freeman, Scott Sims, Gene Banks, Jon Sundvold, Morlon Wiley, and Chris Whitney. Anyone? The first three were Chaparrals. The last five played with the San Antonio Spurs. Each one of them wore the number 20, but none of them wore it like Manu Ginobili. With a list of accolades a mile long, El Contusion put on #20 and made it his own.

Honestly, any article on Manu Ginobili could be substituted for a list of bullet points highlighting his achievements and that list would run longer than most player’s career biographies, but what Ginobili has accomplished pales in comparison to who he is. The style, heart, and passion that this man brought to every single moment he spent on the court cannot be understated. Known for making a bad play and immediately making up for it was a trademark of Manu’s dedication and personal standard.

The Big Bang of the international basketball player

Manu Ginobili was born in Bahia Blanca, Argentina where his father coached basketball. Along with his brothers Leandro and Sebastian, the Ginobilis learned the sport that became their trademark.

Manu began playing professionally in 1995 in Argentina for Andino Sport Club of La Rioja. He was later traded to his hometown team where he continued to play until 1998.

At the beginning of the 1998-99 season, Manu embarked on a career overseas playing in Italy with Basket Viola Reggio Calabria. In 1999, Ginobili entered the NBA draft and was chosen in the 57th spot by the San Antonio Spurs. He continued to play in Italy with Kinder Bologna where he won the Italian League Championship, 2001 EuroLeague Championship, two Italian Cups, and earned the EuroLeague MVP.

In 2002, Manu led the Argentinians to 2nd place in the FIBA World Championship and made the All-Tournament Team.

It was at the start of the 2002-03 season that Ginobili finally donned a Spurs jersey and made his debut, starting slowly due to injury but gaining prominence throughout the season as he earned Western Conference Rookie of the Month in March and was named to the All-Rookie Second Team. During the playoff run, the rookie saw his minutes increase and his role expand as the Spurs rode the wave into their second NBA title. For his part, Manu Ginobili was named Argentina’s sportsperson of the year, the Olimpia de Oro.

By his second season, Manu was part of the starting line-up along with his fellow Big 3 teammates as well as Bruce Bowen and Rasho Nesterovic. The Spurs came up short in the postseason, but Manu’s proclivity for the game was well established.

Not just the NBA

During his break from the NBA, Manu led the Argentinian basketball team in points and rebounds to a gold medal in the Summer Olympics, making Argentina the only team other than the United States to win a gold medal in sixteen years.

As the 2004-05 season rolled in, Manu continued to start for the Silver & Black. The league recognized and honored him with a place on the All-Star team. He continued his championship-worthy play into the playoffs averaging 20.8 points per game and 5.8 rebounds as the Spurs took the Detroit Pistons to seven games. He was a candidate for MVP but lost by one vote to Tim Duncan.

In the midst of the 2006-07 season, Manu made the transition to second string, adding a necessary spark to the bench and helping push the team to their fourth NBA title against the LeBron James Cleveland Cavaliers.

Heading into the 2008 season, Ginobili played a bigger role as he reached career high averages in points, rebounds, assists, and three-point field goal percentage. On February 11, 2008, he scored 34 points and recorded 15 rebounds, becoming the first guard in Spurs’ history to have at least 15 points and 15 rebounds in a game. Manu won the 2008 Sixth Man Award, winning 123 out of the 124 first place votes. In addition, he was named to the All-NBA Third Team.

That summer, he returned to defend his goal medal with the Argentinian National team in the 2008 Beijing Olympics. Manu was unable to complete the summer after suffering an injury during the semifinals, but his beloved squad brought home the bronze medal defeating Lithuania.

The injury persisted and Manu spent most of the 2008-09 season on the sidelines. He was unable to participate in the postseason, and the Spurs were eliminated in the first round for the first time in eight seasons.

Possibly his most infamous non-basketball play on the court, Manu Ginobili took out a bat with one swipe during a Halloween game against the Sacramento Kings at the AT&T Center.

With no signs of slowing down, Manu finished the 2010–11 season eighth on the NBA MVP ballot, was named an NBA All-Star for the second time, and earned All-NBA third team honors. In fact, as he aged, Manu continued to find himself competitive with the younger generation of players.

Year after year, Manu racked up highlights and career bests. During the 2013 NBA Finals, he tallied a twenty-four point game and took third in the voting for NBA Sixth Man. The Spurs fell short of their goal, but the next season was to be a momentous occasion.

In what was possibly the greatest payback of all time, the San Antonio Spurs returned to the 2014 NBA Finals, their first back-to-back appearance, to once again face the LeBron James Miami Heat. Game one introduced an unusual element to the Finals — real heat. The air condition at the AT&T Center stopped working and the men from South Beach wilted on the hardwood. Manu made a comment about playing most of his life without air condition, especially in the gyms of Europe that have no AC.

The MVP may have not gone to Ginobili, but he scored 19 points in the come from behind final game that earned the Spurs another ring as world champions.

Together with Tim Duncan and Tony Parker, the trio won their fourth title, dubbed “the sweetest,” and took one last moment in the spotlight while all of the basketball world that had sniggered about the Silver & Black being too old watched in amazement.

In 2016, Manu played his 900th NBA game only to obtain a testicular injury two weeks later against the New Orleans Pelicans that sidelined the Argentine for a month after surgery. On November 9, 2016, Ginobili joined Rashard Lewis as the only second round draft picks in NBA history to score 13,000 career points and make at least 1,300 three-pointers.

And then, of course, there was a career highlight in the 2017 Western Conference Semifinals.

In the next round against the Golden State Warriors, Manu became the first player at the age of 39 to score 20 or more points off the bench in a playoff game since that stat was recorded.

Before the 2017-18 season, Manu turned 40-years-old which opened him up to numerous firsts. In back-to-back games in January 2018, he scored 21 and 26 points respectively making him the first quadragenarian in NBA history to score 20 or more points while coming off the bench.

Three weeks later while the Spurs were playing the Sacramento Kings, he scored 21 to Vince Carter’s 15 creating the first game in NBA history where two over-40 players scored more than 15 points.

In March of that season, Ginobili surpassed David Robinson’s 1,388 steals to become the Spurs’ franchise leader in steals, eventually tallying 1,392 for his career.

In the postseason, he played his 218th playoff game, passing Shaquille O’Neal and landing him fifth all time. At the same time, he surpassed Reggie Miller and took the third all-time spot in made 3-pointers during the postseason.

Game 4 of the playoffs looked to be a sweep, but Manu reached deep and carried the team he loved so dearly to their sole postseason win against the Finals-bound Golden State Warriors. He scored 16 points with 5 assists and 3 rebounds in his last game at the AT&T Center, truly leaving it all on the floor before the Spurs’ season ended two nights later.

Following the 2017-18 season and after much deliberation, Manu Ginobili determined it was the right time to retire.

And on March 28, 2019, the San Antonio Spurs retired #20 and added Ginobili to the rafters right next to Tim Duncan, his teammate for his entire NBA career.

For those fortunate enough to attend the ceremony, the entire night featured highlights and tribute videos of Manu. Even the halftime show introduced a roundtable that featured members of the Argentinian National Team.

And of course, the ceremony was wonderful and bittersweet as it became more obvious this era, the greatest period of the San Antonio Spurs thus far, was coming to an end. It would be up to another generation to carry on the traditions that were created by David Robinson, raised by Tim Duncan, and bloomed under the love and care of Manu Ginobili.

Perhaps the hardest thing for fans to accept after Manu retired was there would no longer be the joy of seeing him enter the court and bring life and big plays to the Spurs whenever they needed it. To remember some of those moments, Marilyn Dubinski created a playoff bracket of Manu Ginobili’s best plays after he retired in 2018, so be sure to go check it out, especially some of those lower ranked moments that are often forgotten in the shadows of others but are still a reminder of how great Manu was.

Ginobili is not gone, he can still be seen at games. And with the addition of Tim Duncan to the coaching staff, the hope is alive that Manu will find his way to the sidelines. Though it would be impossible to recreate and teach his particular magic, any player working with Manu would instantly improve his skill set and increase the likelihood of expanding his career.