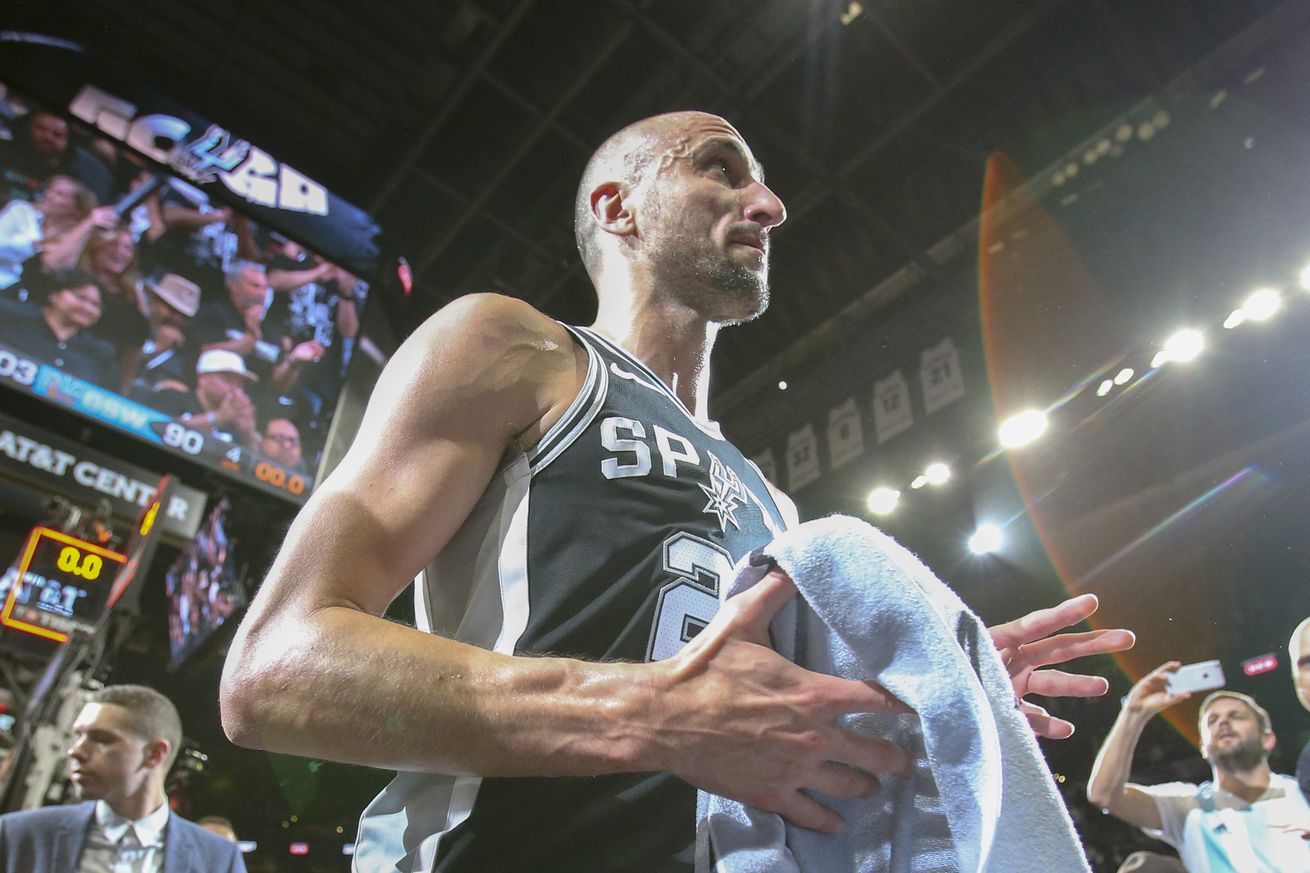 The third and final part in a series looking at Manu Ginobili’s final season.

This completes a 3-part series looking at Manu Ginobili’s final regular season in the NBA. You can read Part 1 here and Part 2 here.

With a flair for the dramatic with his play style, it was only natural that Manu Ginobili was also a big-time clutch performer. That wasn’t just limited to hitting a timely bucket or nailing a game-winner, either.

Needed a steal? He’d dive for one.

Force a 5 second violation on an inbounds play? He’d HOUND the inbounder.

An opportunity for a charge? Yes, even at 40, he’d stand in there and take it.

Age 40, we were provided plenty of these and other familiar Manu moments. Here are the five that stood out the most to me.

December 8th, 2017: Game-winner against the Celtics

Facing the prospect of being swept for the season series against the Celtics, the Spurs had 2 shots to win the game after Kyrie Irving missed a go-ahead 3 pointer with 45 seconds left to go. Working the clock and a high pick-and-roll, Patty Mills found Rudy Gay for a wide open 3 that ended up clanging off the rim and was up for grabs. Enter Ginobili, who dove into the paint and picked up the board after a timely tip-out from LaMarcus Aldridge. Setting up at the right wing and working the clock, Ginobili came off a screen and buried the go-ahead 3 with 5 seconds left in the game. The Celtics would go on to miss a shot to tie the game, which secured a win in one of the most entertaining games of the year.

December 16th, 2018: Game-winner against the Mavericks

A week after his heroics against the Boston Celtics, Ginobili was at it again against an old Spurs’ rival in fellow old-head Dirk Nowitzki and the Dallas Mavericks. After fighting back into the game to tie it up after trailing 96-87 with 3 minutes to go, the Mavericks had the ball out of bounds with 24 seconds to go. Hounding Wesley Matthews on the inbounds, Ginobili (who may be the greatest inbounds defender ever) forced the turnover that set the stage for more heroics. With 10 seconds left, Ginobili, isolated on the left wing, went into a pick and roll with LaMarcus Aldridge trying to force a switch onto Nowitzki. With a quick burst, Ginobili drove to his left and found himself with a wide open lane to the cup, with Matthews being able to do nothing but watch.

The second game of a crucial 6-game home-stand that contributed to their spot in the post season had a few memorable Manu performances. With the freakish Anthony Davis and the Pelicans in town and that playoff spot on the line, Manu did what he did for 16 years. Shooting only 2-7 and scoring 11 points, he nonetheless found a way to have a major impact on the game when he drew two fouls on Davis (who eventually fouled out) as well as a technical each on Davis and Pelicans coach Alvin Gentry. A block on The Brow, one of the best young players in the game and a potential MVP candidate, was nearly the icing on the cake.

With the Spurs’ needing a win to put the playoffs within a finger length, Ginobili once again reached into the Fountain of Youth. Within a span of 50 seconds, he turned a minuscule 4-point lead into a 12-point cushion, with two 3-pointers and a classic finger roll that would surely make the Iceman smile. A 4-4 shooting performance in the 4th contributed to a game where Ginobili ended up going 7/7, the most shots he’s ever made without missing in a game throughout his career.

After dropping 2 games in Los Angeles with a playoff spot on the line, the Spurs returned home for their final home game of the season against a Kings team with nothing to play for. The Spurs, however, found themselves stuck in the mud offensively for much of the game, heading into the final frame with only 60 points and trailing by 6. Scoring 17 points for the game with 6 coming in the 4th and assisting on 6 more, Ginobili capped off what proved to be his final regular season game in San Antonio with a monstrous dunk on Buddy Hield.

Have one that I missed? Let me know about it in the comments!