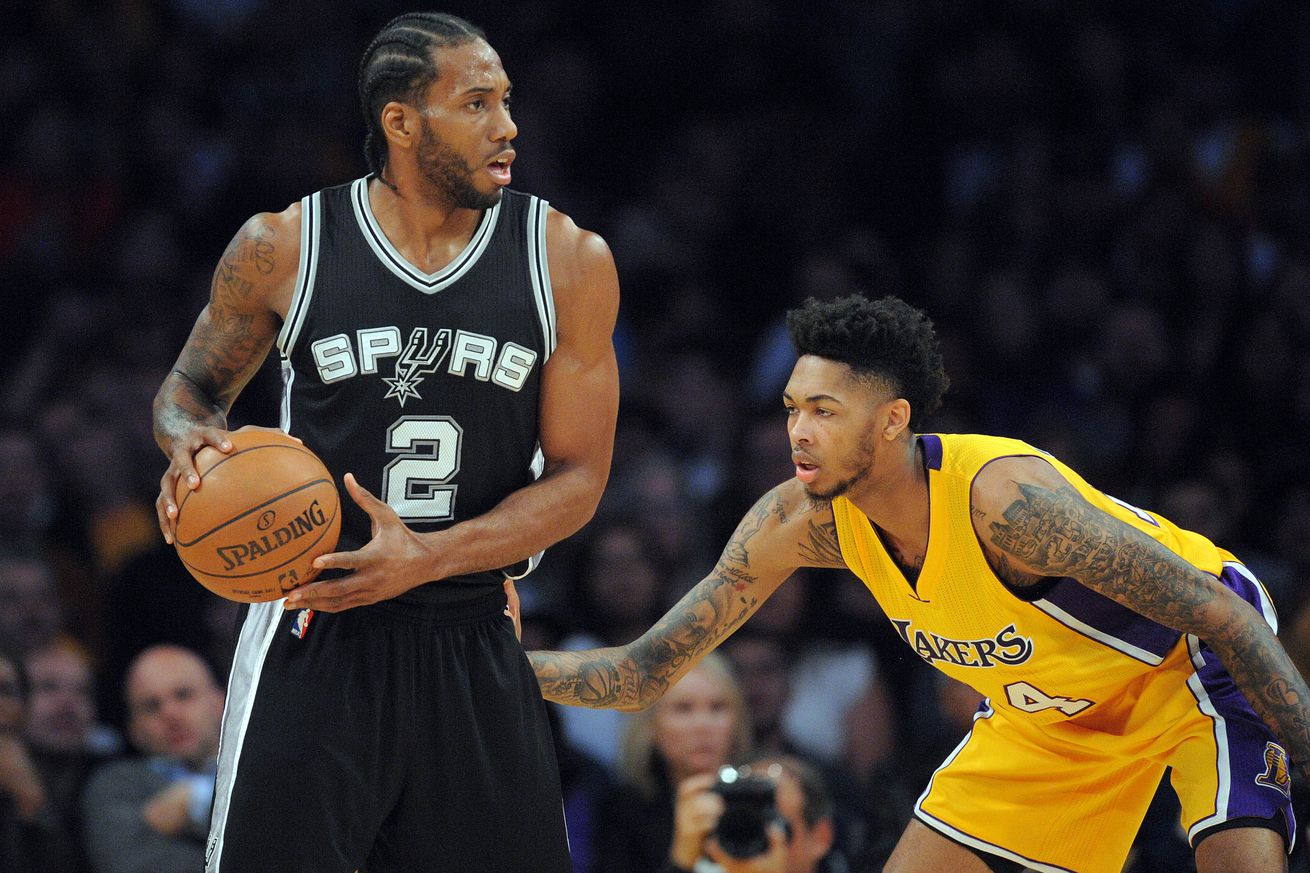 The Lakers, Celtics and 76ers all reportedly want Kawhi. Let’s take a look at what each team has to offer.

We finally have some clarity regarding the Kawhi Leonard situation. After attempting to repair the relationship with their superstar, the Spurs now finally appear ready to trade him. In the past day there have been reports about active negotiations, which means a deal might come soon.

The Spurs are negotiating with several teams, according to ESPN’s Adrian Wojnarowski. The Lakers, Kawhi’s preferred destination, are one of them. The Celtics, the team with the best assets to trade, are in the mix, too. The 76ers are also trying to secure Leonard, hoping to then lure LeBron James to Philadelphia.

Those three franchises appear to have the best odds of landing Leonard in a trade. Let’s take a look at what they have to offer, what they’ll likely be willing to offer and which potential package would be the best for the Spurs.

The Celtics have all the leverage

Let’s start with the Celtics, as they have the most intriguing pieces to offer. Boston has two young players with All-Star potential in Jaylen Brown and Jayson Tatum, several first round picks and some intriguing lesser pieces like Terry Rozier. If they are concerned about the future luxury tax implications of adding Leonard to their core of Kyrie Irving, Gordon Hayward and Al Horford, they could trade one of the those veterans. If the Celtics want Leonard, they can outbid anyone for his services.

Unfortunately for the Spurs, it’s hard to see the Celtics putting together a truly great offer. They took the Cavaliers to seven games in the conference finals last year, despite not having Hayward for the entire year and Irving for the playoffs. With LeBron James possibly leaving the East and the Raptors entertaining a rebuild, they can stay put and still be the best team in the conference. They also know that the Spurs clearly don’t want to trade Leonard to the Lakers, so they have extra leverage there. They probably only have to put together a competitive offer to get Kawhi, and they know it.

At one point, getting both Tatum and Brown was at least a small possibility for the Spurs. Now there’s no chance Boston does that. If they are willing to include one of their blue chppers, it’s likely to be Brown. An offer centered around him, the Kings’ pick and filler would be intriguing for the Spurs. If they instead try to move a veteran straight up for Kawhi, they will likely prefer to trade Irving, who’s in the last year of his contract, instead of Hayward. Irving at one point hinted that he wanted to play for the Spurs, but it would be a risk to trade Leonard for him without assurances that he’s staying.

The Celtics have so many assets that they could put together a good enough offer to land Kawhi without overpaying. Which is a good thing, because I doubt they’ll be willing to break the bank for him.

The Lakers appear motivated to land Leonard, but might not have enough assets for a Godfather offer

Recent reports have the Lakers trying to land an extra first round pick, presumably to include in a Kawhi Leonard trade. They reportedly want to secure Leonard sooner rather than later to increase their chances of landing LeBron James. The fact that they are so clearly motivated to land Kawhi is fantastic news for the Spurs. Even if they’d prefer to send him to the Eastern conference, they would surely take a Lakers offer that is clearly superior to the others out there. At the very least, a good offer by the Lakers would only raise Leonard’s value, which would help the Spurs’ leverage with other teams.

Yet as much as the Lakers clearly want Leonard, it’s hard to see them putting together a Godfather offer. The main issue is the Spurs’ reported disinterest in Lonzo Ball. Since the Spurs apparently don’t want him included in any package, the only true great asset Los Angeles has to offer is Brandon Ingram. Future picks wouldn’t really be all that valuable, since the Lakers will likely add other pieces this offseason, catapulting them to the playoffs and outside of the lottery. Kyle Kuzma is a nice prospect, but his poor defense and passing could prevent him from becoming more than a sixth man. The other young players don’t have significant upside.

The Lakers would have to include a huge number of assets in a package to get the Spurs to pull the trigger now, but it makes little sense for them to do so, considering Leonard specifically listed them as his preferred landing spot. They could try to simply offer Ingram, Kuzma and a couple of low value draft picks and hope the Spurs blink first. The only reason to go all in would be to make sure LeBron also signs there. If James outright demands that they get another star before committing, the Lakers would have no choice but to go for broke and send out Ingram, Kuzma, Josh Hart, Mo Wagner one of their own picks and a pick they get from another team to get it done.

If that’s the case, the Spurs should probably make the deal. If they Lakers understandably offer less than that, San Antonio should continue to canvass the league, hoping for a better offer.

It’s no secret the 76ers are looking for another star. If they land Leonard without dipping into their cap space, they could get two by singing someone else in free agency. With Kawhi in tow, they could battle the Celtics for Eastern conference dominance for years to come. If they also get LeBron after landing Leonard, they could compete with the Warriors. The Sixers have an actual chance to really accelerate The Process this summer and immediately become a legitimate contender.

It’s understandable for Philadelphia to at least to be in the Kawhi sweepstakes, considering the upside. I’m not sure it would be understandable for the Spurs to go for the type of package the Sixers could put together, though. Dario Saric is an underrated player. He’s a starting caliber combo forward who does all the little things and can also score from inside and out. Robert Covington is one of the league’s best defenders and, while streaky, he’s a good enough three-point shooter to be a starter on a good team. The Spurs could plug them in the two forward spots and win 50 games next season. The problem is it might be hard to get from there to 60 wins and true contention.

Saric has some upside, but will likely peak at elite role player or third star. Covington is 27 years old and has likely tapped out his potential. Other packages don’t offer the Spurs the assurance that they will remain competitive that the 76ers’ does. But they do include young players whose development could allow the team to return to contender status. The Sixers could tout the Heat’s 2021 unprotected first rounder as the piece in their package that has the potential to get San Antonio a future young cornerstone, but it conveys in three years. It’s impossible to know how good Miami will be then.

The pick could be good. Saric and Covington are good. But there’s just nothing particularly exciting about a potential Sixers deal. It’s the less risky of them all, but also the one that offers the least upside.