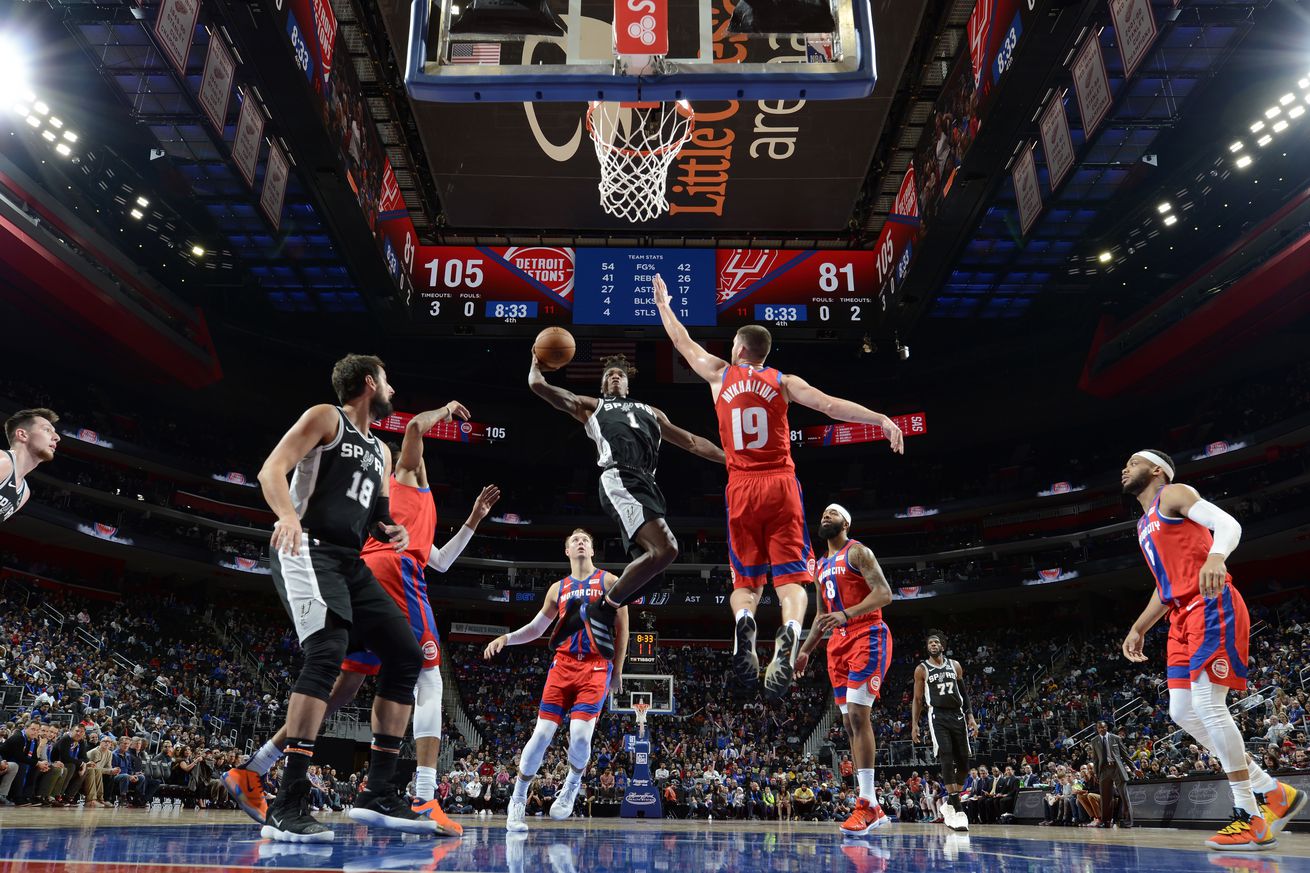 In his last two appearances, LWIV has stood out.

The Spurs were already down by 17 when Lonnie Walker IV checked into the game for the first time with 4:16 to go in the 3rd quarter. Despite his best efforts, the Pistons’ lead would do nothing but grow for the rest of the night, finally settling at 34 after Sekou Doumbouya spun into a lefty layup over Lonnie’s outstretched hand with 40 seconds to go.

That left Lonnie with a plus/minus of -17 on the night, yet another indicator of just how poor a measure of an individual performance single game plus/minus is. Lonnie was easily the team’s most competitive wing defender, and just as importantly, he was both aggressive and efficient on offense.

He made several memorable plays, but the most meaningful came after a Spurs’ timeout with 8:41 left in the game.

The play works exactly as designed, with Lonnie coming up out of the corner over a screen from Dejounte Murray to take a dribble hand off from DeMarre Carroll on the left wing. Luke Kennard goes under the hand off, so Lonnie gives him a slight shoulder fake like he’s going to drive back to his left, causing the Pistons’ guard to follow a little too far around the screen. That opens up a wide open driving lane straight down the middle.

On the weak side, Marco Belinelli is curling over a screen from Drew Eubanks into the paint. At first glance, with Svi Mykhailiuk trailing Marco into the paint, it appears that action has done nothing but drag another defender into the mix. But Mykhailiuk has to track Marco, meaning his back is turned and he’s literally running away from Lonnie, while at the same time he’s between the Pistons’ only rim protection on the floor, Christian Wood, and Lonnie’s path to the basket.

There’s a brief window where Marco is open enough that Lonnie could try to sneak a bounce pass in for a layup, and for most of the Spurs’ perimeter players, that would probably be the right play here. But Lonnie can get to the rim much faster than Wood can recover and will eventually release his soft finger roll much higher than Mykhailiuk’s last second contest can hope to reach.

In terms of the outcome, that play, like most of Lonnie’s minutes this season, was irrelevant. Lonnie’s graceful acrobatics cut the lead to 22, but the Spurs would never get any closer. In terms of what it means for the team, plays like that are a good indicator that Lonnie deserves a spot in the rotation on a nightly basis.

Given the game state, it’s fair to point out that the Pistons’ defense probably wasn’t as locked in as they had been in building their lead, but it’s not like any of the other Spurs’ looked especially good during that period, which is why Lonnie’s play stood out. He scored or assisted on 19 of the team’s 35 points in his 16 minutes of play, easily his best output of the season.

And it wasn’t all aerial fireworks; Lonnie also used his penetration to produce a pair of open corner threes.

Patty Mills’ screen forces a switch, and Lonnie immediately attacks the middle of the floor. Derrick Rose, who is following Patty across the lane, holds up to cut off Lonnie’s path to the basket and tries to draw a charge in the process. But Lonnie is able to elevate and avoid contact, firing the ball out to Patty in the right corner. Patty’s three ball is a little long, but Lonnie pulls down the rebound, buying the team another opportunity that results in points thanks to a needless goaltend by Markieff Morris.

Lonnie’s decisive drive breaks down the Pistons’ defense on what had otherwise been a pretty stagnant possession, drawing help from Wood and causing Morris to leave Trey Lyles in the corner to prevent the easy drop off to Drew. Lonnie reads the help and flicks the ball out to Lyles, who has time to take a dribble and set his feet before nailing the triple.

This version of Lonnie is a far cry from his passive effort in the team’s loss to the Clippers early in the season that led to Gregg Popovich calling him “non-competitive”. Lonnie put up 13 points on 12 shots against the Pistons, with 2 assists, a secondary assist and 5 potential assists. That’s a lot of offensive value in a relatively short amount of time. He was as competitive as anyone on the team, and more-so than most.

He wasn’t perfect on either end, but that’s not the expectation. He was aggressive and engaged on and off the ball on offense and defense. When he plays like that, there’s no need to break down the weaknesses of the players ahead of him. It’s enough to say that nobody else on the team can do what he does and leave it at that. It’s true that Lonnie can’t fix all that ails this team on his own, but the time for him to get the opportunity has come. Put him in, Coach.