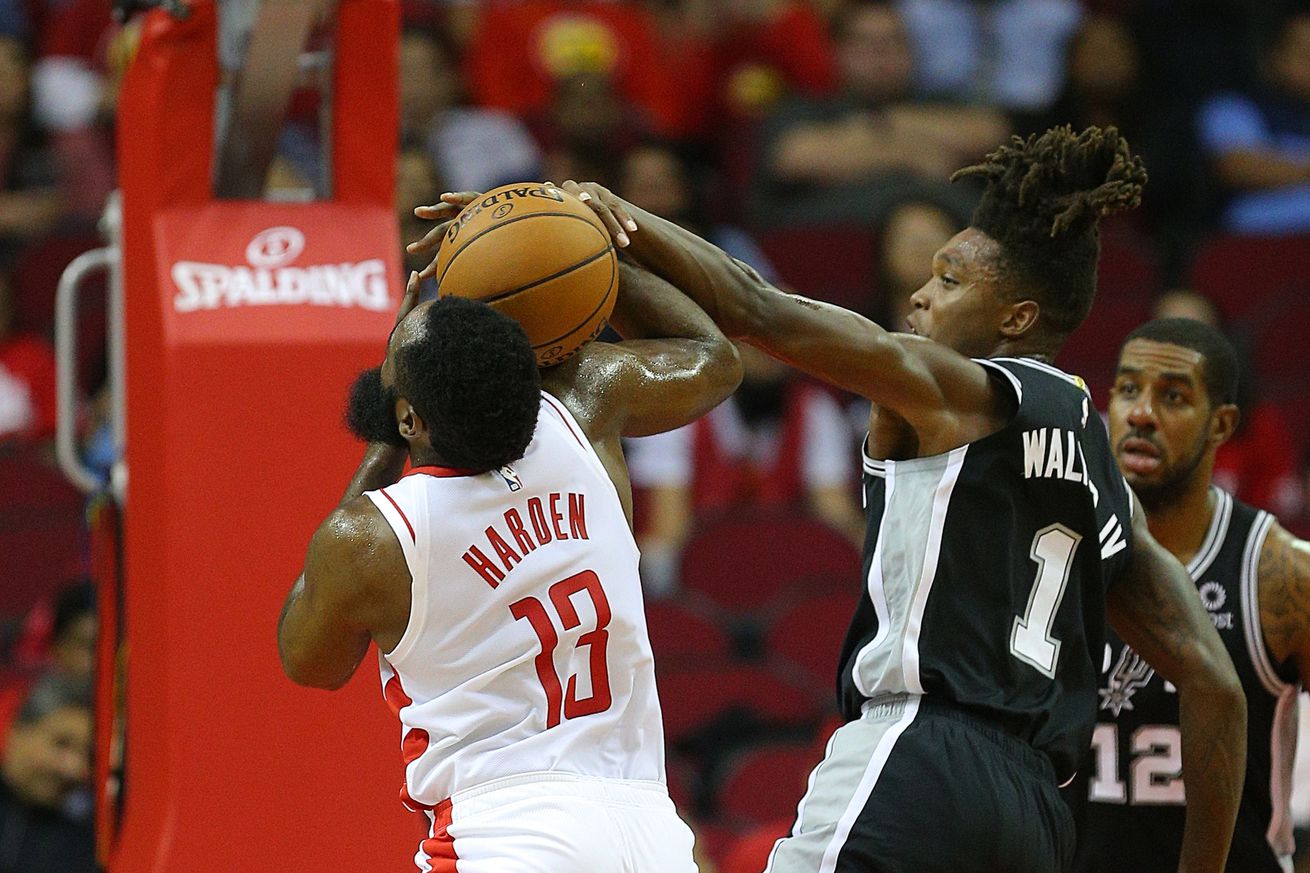 Lonnie Walker IV may seriously contribute to the Spurs defense.

There is no better way to earn Coach Gregg Popovich’s trust than to compete on defense. Effort on that end, even more so than textbook execution, is paramount. After a disappointing defensive performance last season, that may be truer now than ever.

Fortunately, this year’s team is stocked with guards who will fight around, through and over everything in their path to stay in the play, a trait Lonnie Walker IV – and others – put on full display in Wednesday night’s meaningless preseason victory over the Rockets.

Standard caveats apply, of course: It’s not the regular season, the Rockets will try harder in games that matter, etc. But the performance of the Spurs’ young perimeter players was still remarkable; Walker’s particularly.

Lonnie spent most of the night matched up against James Harden, and he more than held his own. The Rockets used a fair portion of most plays trying to get Lonnie switched off him, with little success. Even when Harden could generate a little separation, it didn’t always go the way he’d have liked.

Here, Clint Capela’s screen puts Lonnie on his back, giving Harden a chance to attack LaMarcus Aldridge in drop coverage. LaMarcus does a great job of backpedaling and staying close without committing. By the time Harden eases into his floater, Lonnie has recovered and swallows up the attempt.

The Rockets recover the loose ball, but (in what’s maybe the most impressive part of the play) Lonnie is still all over Harden.

That wasn’t Lonnie’s only block on Harden, either. He also smothered an attempt midway through the 1st quarter.

Of course, now’s a good time to mention that Harden still put up 40 points on 31 shooting possessions, so it’s not like Lonnie or anyone else shut him down. But they did an excellent job of forcing him to make contested shots and not allowing him to draw help and force rotations.

Dejounte Murray had a few of his own moments against Harden, the best of which included a brief interlude for trash talk between grabbing a rebound and blowing though the entire defense for a layup.

And Derrick White got in on the act, too, with a block on Harden and a steal on a Russell Westbrook drive.

There have been times in each game of the preseason, and especially against the Rockets, when opposing players appeared to size Lonnie up, do some quick math, then swing the ball elsewhere. His presence is already a deterrent, providing a clear and compelling reason to pass just by being on the court.

In that respect, he’s essentially the opposite of the player who he’s likely competing with for minutes. Marco Belinelli has almost no effect on the players he defends, who will ignore him even when he’s in perfect position.

It could be that sitting low in his athletic stance with his arms spread and hair still towering over head, Lonnie appears much larger than he ought. It could be that his feet move too quick for his opponents to capitalize on any momentary advantage, if one can even be created. Or it could just be preseason — though staying with Harden, even when he’s not dialed in, still requires a ton of talent, effort and discipline.

Whether that will continue to be on display in the regular season is an interesting question. Defensive liabilities aside, Marco’s shot making and creation are important, and he can heat up quick, as he did in this game with 15 points on a diet of the most difficult shots you can imagine. It’s fair to wonder if Lonnie will provide more value than Marco with one of Dejounte or Derrick already on the floor.

Against teams like the Rockets, who have two elite guards, the answer is probably yes. Against teams who get their playmaking from elsewhere, that may not be the case. One outstanding defensive performance in preseason isn’t going to earn Lonnie consistent minutes all by itself, but it’s a good start.