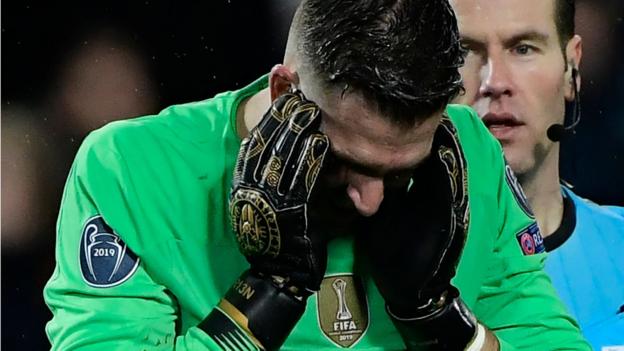 The suggestion that Liverpool’s sequence of poor results is because they have run out of gas does not stack up when you look at their performance against Atletico Madrid.

Yes, Atletico knocked the Reds out of the Champions League on Wednesday but I was at Anfield and that was probably the best that Jurgen Klopp’s side have played in the past couple of months.

This was their fourth defeat in six matches that have seen them eliminated from Europe and the FA Cup, as well as their long unbeaten Premier League run come to an end – but it is too simplistic to say the Reds have just blown up.

With the way they took the game to Atletico, I did not see a team who have run out of anything – energy, ideas or belief.

Before the game, Klopp had spoken about how Liverpool would have to be almost perfect to get through to the quarter-finals after losing 1-0 in Spain.

He talked about them having the right intensity, controlling the game and creating chances.

They did all of those things, but the first mistake they made – after 97 minutes – was what cost them the tie.

Atletico were gifted a way back into the game

When Firmino scored to put them 2-0 up on the night at the start of extra time, Liverpool were ahead on aggregate in the tie for the first time.

By then, over the two legs, they had been behind for 129 minutes, and had then spent another 97 minutes level.

After so much hard work to get on top an obdurate Atletico side, they surrendered their advantage after only 167 seconds – and it was all their own fault.

They were in control but it was as if they felt like they needed to score another goal to finish Atletico off.

I can understand why, because Liverpool are very good attacking team and they had played well, and created a lot of chances.

But instead of pushing forward, they could have sat in because suddenly Atletico were in a situation where they had to come at them a little bit, and that is not something they are terribly good at.

I wanted to see Liverpool ask Atletico ‘what have you got?’ because I think it would have led to further Reds’ chances, but instead they immediately gifted the Spanish side a way back into the game.

Adrian always has an error in him

I already knew there was a big gap between Liverpool’s first choice goalkeeper, Alisson, and his back-up, Adrian.

That is the case at a lot of clubs, not just the Reds, but Wednesday was a reminder of why Adrian is not a top-class keeper.

One of his problems is that he is not very good at coming out of his area and judging situations, and another is that his kicking is not great.

Both of those issues played a part in him giving the ball away as Atletico scored their first goal of the night.

Playing out from the back is in vogue at the moment – it seems to be something that all teams have to do.

If you want to do that with Alisson, who is very good at it, then that is fine.

But Alisson was injured and Adrian is not comfortable playing that way, so why not just tell him to stick it in the stands instead?

Adrian is 33 so you are not going to change him, either. He is not going to suddenly become really good with the ball at his feet, and he is always going to have a mistake in him.

Unfortunately for Liverpool, Adrian’s error was something they never recovered from. It not only lifted Atletico, it changed the whole mood of the tie.

It was one moment out of a total of 210 minutes in the tie, but the influence it had on the outcome was massive.

From thinking ‘what do we do now?’ when Liverpool led 2-1 on aggregate, Atletico suddenly had a new lease of life.

The impetus they gained from it saw them score again soon afterwards, before their late third goal made completely sure of their progress.

For Liverpool to lose on the night was hard to take when you consider how they had Atletico penned back in their own half for long periods, and created so many chances.

Adrian’s opposite number, Jan Oblak, was Atletico’s best player, and the Spanish side created next to nothing in normal time.

Why Liverpool fans can wait for their title party

Next up for Liverpool is a trip to Goodison Park, for Monday’s Merseyside derby. There is no chance the Reds will let their performance levels drop for that one.

It appears there is a good chance that game will be played behind closed doors because of coronavirus concerns. I don’t think the Premier League have much choice about doing that if they want to get the season finished.

If it happens on Monday, it will be a weird experience, and it will probably help Liverpool because Everton will lose some of their home advantage when there is no crowd.

Goodison would have been rocking for two reasons – firstly because Liverpool are the enemy, but also because Everton have their own point to prove after losing 4-0 at Chelsea on Sunday.

One way or another, whether the stadiums stay empty or the season is suspended for a few weeks, it is just a matter of time before Liverpool win the title.

Everyone is asking ‘how will they celebrate?’ if they cannot get into the ground where and when the title is won but, after waiting 30 years to see it happen, I am sure Liverpool supporters will not mind waiting a few extra weeks for there to be a party.