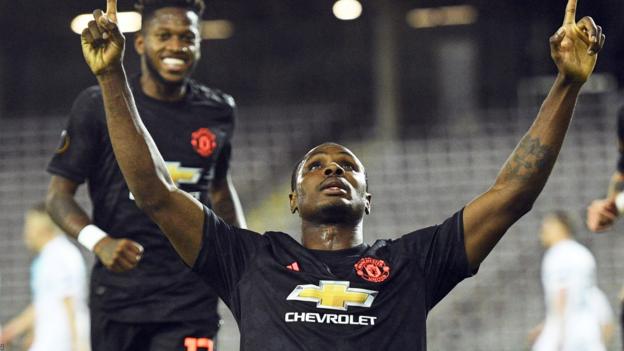 Manchester United took control of their Europa League last-16 tie with a resounding first-leg win at LASK, in front of a crowd of 500 people.

Odion Ighalo’s superb goal set United on their way inside a largely empty Linzer Stadion after the Austrian government had restricted the attendance in response to the coronavirus outbreak.

The 30-year-old Nigeria striker has now scored four goals in three starts United, who are now unbeaten in their last 11 games in all competitions.

However, he will have scored few better, or in a more surreal atmosphere than the opening goal, with the forward collecting Bruno Fernandes’ pass and juggling the ball from right foot to left, before dispatching it into the top left corner, off the underside of the crossbar.

Despite making five changes to the side that started their Manchester derby victory on Sunday, Ole Gunnar Solskjaer’s side appeared confident and fluent throughout.

Juan Mata, Daniel James and Harry Maguire all had chances to add to their tally, while Ighalo hit the post before supplying James for United’s second – with the winger cutting inside and driving a right-foot effort into the bottom left corner.

Fred’s incisive pass allowed Mata to roll in a third, while substitutes Mason Greenwood and Andreas Pereira, added a fourth and fifth in injury time.

And it was no more than United deserved for a dominant display that maintained their record of having never lost to Austrian opposition in European competition.

Almost 20 years have elapsed since United last visited Austria in European competition, with United manager Solskjaer coming on as a late substitute in a 2-0 win at Sturm Graz.

And while, for the most part, this showing had echoes of that professional display, he will have been delighted by the emphatic nature of the scoreline at the end.

While Ighalo should get credit for his excellent strike and his role in James’s first goal since 31 August, this was another United performance that was underscored by the brilliance of Fernandes.

The Portugal midfielder made more key passes (6) than any other player on the pitch and set the tone for their attacking play until he was withdrawn in the 78th minute.

He had already made several excellent breaks forward before fortuitously getting the run of the ball in the build-up to Ighalo’s opener.

But his outside of the foot pass into the forward was exactly the sort of deft delivery that has been absent from United’s armoury, until his January arrival.

Since his debut on 1 February, no Premier League player has been involved in more goals in all competitions than Fernandes, who has also been directly involved in more Europa League goals than any other player this term.

Aside from his quality in possession, Fernandes has also added to the dynamic within the group, due to his demanding nature.

The ever-improving Fred, who had the best pass completion rate (87%) of any midfielder appears to be one player who has directly benefitted, with his sublime pass to Mata underlining the point.

LASK struggle to bridge step up in class

Strong domestic form has put Valerien Ismael’s LASK side on course for only their second ever Austrian Bundesliga title, 55 years after their first in 1965.

And their adventurous 3-4-3 formation has helped them to 12 wins from their last 14 domestic league fixtures and provided the backdrop for six unbeaten games in this competition.

But they struggled to impose themselves on a United side that represented a clear step up in class and they also appeared hamstrung by the absence of home supporters.

Klauss’ bundling early run down the right should have provided some impetus for the home side but instead United were allowed to quickly re-establish their authority.

A flurry of blocked shots, culminating in Rene Renner’s wild left-footed shot five minutes before the break provided their next noticeable reference point in attack.

And while United were clinical, LASK failed to register a single effort on target.

‘Some football we should be proud of’ – what they said

Manchester United manager Ole Gunnar Solskjaer said: “The boys were fantastic. I think they deserve a lot of credit and praise for the way they went about the job.

“There was loads of quality in our finishing, some fantastic goals and some football we should be proud of. It was easy (to keep the team focused) because these players are very focused. They know what they want, so there was no doubt in my mind that we were going to do well.

“After the warm-up, Michael (Carrick) and Kieran (McKenna) came to me and said that the boys were really, really good in the warm-up. Focused. I have to praise them, they are very professional.”

LASK boss Valerien Ismael said: “We saw Manchester United’s quality tonight. I think the margin of victory was too big, but it’s a learning process for us. The Europa League journey is over for us.”

Manchester United travel to Tottenham in the Premier League on Sunday (16:30 GMT). LASK are next scheduled to play when they face United in the return leg at Old Trafford on Thursday 19 March (20:00 GMT).