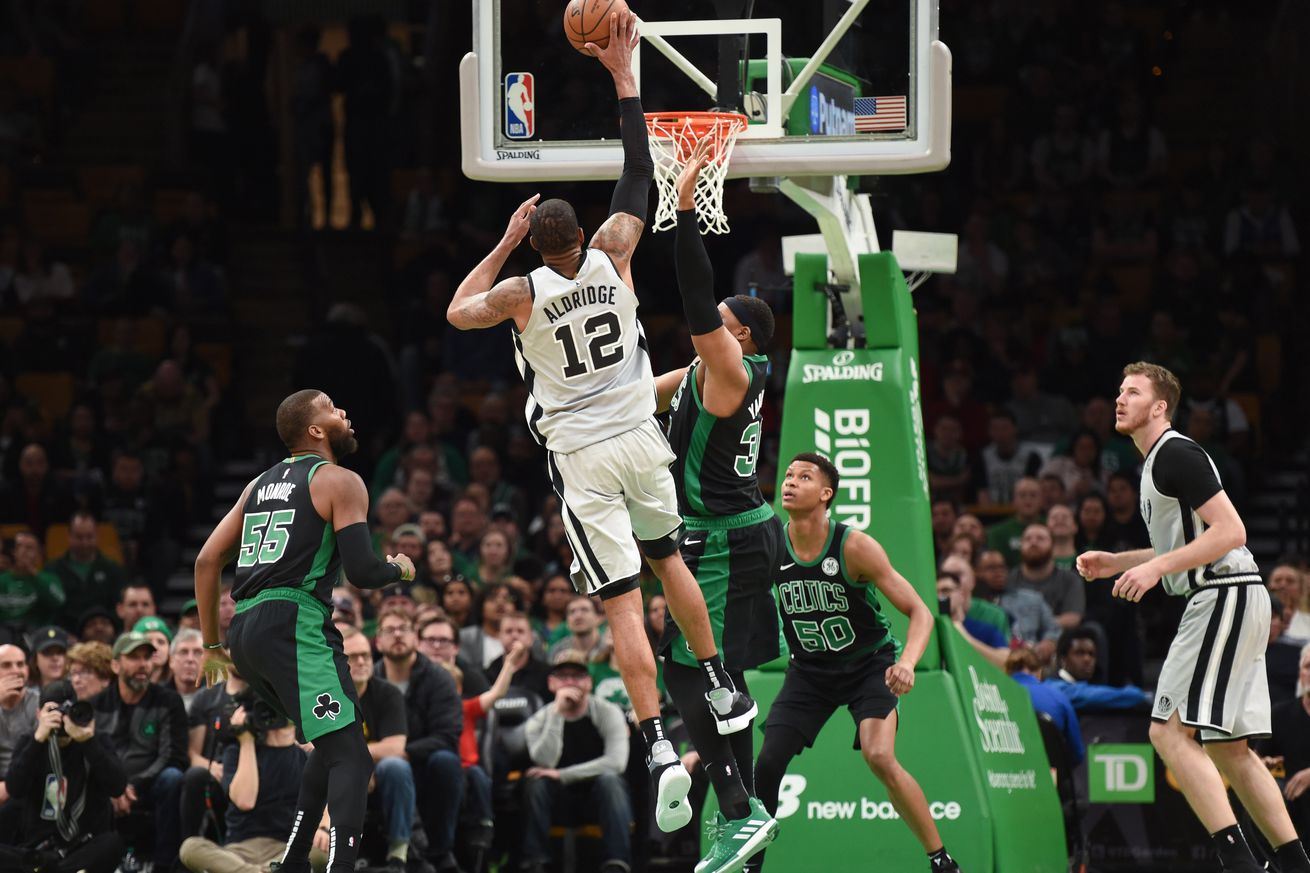 Aldridge was unstoppable, as the Spurs win an important game on the road.

Turns out I enjoy watching LaMarcus Aldridge go off far more than I do James Harden.

Mathematically speaking, each win in the regular season is equally important. Mentally speaking, this one felt more important than most. It’s no secret that the Spurs have been a completely different team at home than they have been on the road. The Spurs had won two out of their last three games on the road before tonight, which showed progress, but neither of those two wins were against teams set to make the playoffs this season. In fact, before defeating the Boston Celtics tonight, the Spurs had been unable to win a game on the road against a playoff team since they defeated the Detroit Pistons way back on January 7th.

Some may claim that this win should come with an asterisks next to it – the Celtics were in a SEGABABA and were without two starters in Al Horford and Jayson Tatum. Coach Pop mentioned this in his postgame interview:

We did a good job. Obviously two of their best players weren’t there, so that’s always tough for a team. We’ve been in that situation before and it’s difficult. But it’s the NBA and you still gotta come and play. What we did well is we didn’t take anything for granted. We respected them and played hard the entire time.

Part of me doesn’t want to feel sorry for a team missing a couple rotational players when all I ever seem to hear from their players is that they have too much talent on their roster. If that’s the case, then they should have no issue playing with the next man up mentality. The other part of me realizes that without Horford in the lineup, the Celtics had nobody to keep Aldridge in check. Aron Baynes is a big body, but he was no match for Aldridge’s versatility.

The second part of Pop’s quote is the biggest takeaway. The Spurs understood the importance of the night, and did not let the Celtics’ circumstances dictate how they approached the game. This was great to see out of a team who has made a habit out of playing down -or below – to their competition this season.

Aldridge is a beast. He regularly takes – and makes – difficult shots, but he’s achieved a level of efficiency in San Antonio that he was unable to reach in Portland. He’s added a lot more variety to his game; no longer relying on a high percentage of mid-range jumpers. This makes him much more difficult to guard. Tonight it didn’t really matter what kind of shots he took, as he was pretty much unconscious the entire night.

The Spurs already take by far the most mid-range jumpers in the NBA at 25 a game, and tonight they upped the ante to the tune of 36 mid-range shots. While that many mid-range shots in a game is not advisable in the modern NBA, the Spurs hit them at a remarkable 52 percent clip tonight, with the majority of that damage coming from Aldridge.

Is it me or has Aldridge become a much better passer out of the double-team? Maybe it’s his court awareness, the personnel around him, or some combination of both, but this development is going to be a key factor to the Spurs having success in the playoffs. Last season all a team had to do was bring help in the post and the Spurs had trouble scoring.

The Spurs’ win over the Celtics moved them to within half a game of the Utah Jazz and Oklahoma City Thunder for 6th in the West. The Los Angeles Clippers continued their winning ways, moving them to 5th in the West.

The Spurs’ remaining schedule is favorable moving forward. Hopefully the Spurs can bring the same intensity to the rest of their games that they brought to the Celtics game. It’s going to be a fun, wild ride to the finish.