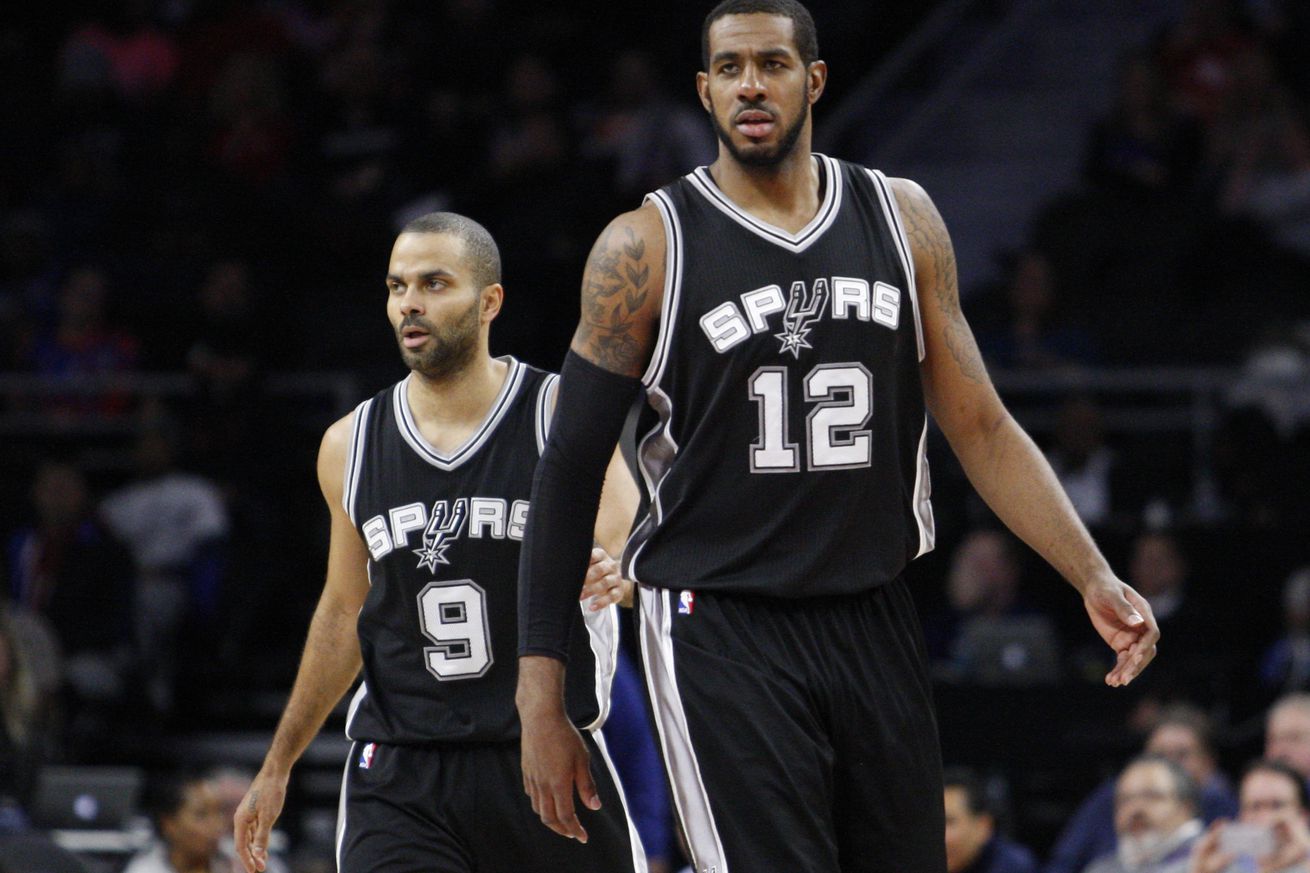 And his success is dependent on The Wee Frenchman.

You may have noticed that LaMarcus Aldridge isn’t having a very good season, at least relative to his usual standards. He’s averaging the fewest points-per-game (17.2) of his career since his rookie season, even though he’s taking a tick more field goal attempts this year than last. His rebounds-per-game (7.4) are also the lowest they’ve been since his rookie year. His PER of 18.7 is the lowest it’s been since 2009-10. He’s 19th among power-forwards in Real-Adjusted Plus-Minus, and tied-for-35th in Win Shares, by my count. He didn’t make the All-Star team for the first time in six seasons, and didn’t really deserve to in my opinion, despite the Spurs’ glossy record.

One can certainly argue that there’s nothing to complain about here. The Spurs are only two losses behind the Golden State Warriors for best record in the NBA, after all, and trending up. Perhaps I’m being a busybody here, making mountains out of molehills or picking nits. Still, I can’t shake the nagging feeling that the Spurs aren’t exactly getting bang for their max-contract bucks with Aldridge.

The good news, though I don’t know if it’s exactly encouraging, is that the drop in performance hasn’t been all his fault. It turns out there’s some correlation here with another member of the starting lineup.

I used basketball-reference.com, ranking Aldridge’s game log by his game score, and cataloged all the games he had at least 17.0 game score points. In these 17 top performances of the season, he averaged 23.5 points on 59.2 percent shooting, with 5.1 free-throw attempts per game, 8.4 rebounds, 2.8 assists and 1.4 blocks. In those games his average plus/minus was plus-10.8 and the Spurs’ scoring differential was plus-14.4. Oh, and they’re 16-1 in those games, the one loss by a bucket in overtime at Atlanta. Overall he’s averaging 17.2 points on 47.6 shooting, with 4.2 free-throw attempts per game, 7.4 rebounds, 2.1 assists, 1.1 blocks, a 4.1 plus/minus and the team’s scoring differential is plus-8.6 in those games, with a 42-12 record.

In other words, the Spurs are a mere 26-11 in games where Aldridge has participated in but not put up at least a 17.0 game score.

Here’s the thing though: Tony Parker, who’s played in only 45 of San Antonio’s 59 games due to “various ailments,” was the starter in 15 of Aldridge’s 17 top performances. And not only did he play in those games, but he’s generally played well. Parker has averaged 12.7 points and 5.5 assists in those 15 games, compared to 10.7 points and 4.1 assists overall.

It’s mostly worked the other way, too.

Of Parker’s 12 games on the season where he’s recorded at least seven assists, Aldridge has played in 10 and averaged 22.5 points in them. The Spurs are 10-2 in those 12 games (Aldridge didn’t play in one of the losses), with a scoring differential of plus 15.5.

According to the tracking data from NBA.com’s Stats Index, Aldridge has received 511 passes from Parker during the season. Patty Mills was next-highest in passing to LMA at 349. Kawhi Leonard, who has by far the highest usage rate on the team, has only tossed it to Aldridge 263 times. As far as actual assists go, Parker’s set up Aldridge for 66 buckets, which doesn’t sound like a lot, but it’s more than the next two-highest guys on the team (Mills and Leonard again), combined. Parker is simply more adapt at freeing and finding Aldridge for open shots more than anyone else on the club. Aldridge has actually assisted more to Leonard (36 times) than the other way around (29 times).

All this is a fancy way to say that Aldridge’s struggles aren’t solely about him. Generally, speaking, when Parker’s healthy, active and productive, Aldridge plays well. And when Aldridge is playing well, the Spurs are awfully hard to beat. The problem, unfortunately, is that the older Parker gets, the harder it’s been for him to stay healthy. Even when he has played, there have been plenty of times this season where he has labored, clearly less than 100 percent.

So that’s going to be the challenge for Gregg Popovich and his staff going forward, assuming that they’re not going to trade Aldridge in the off-season. They’ve got to find ways to get the most out of him, regardless of Parker’s availability and performance. Whether it’s Mills in there or Dejounte Murray or whoever else, they’ve got to develop that chemistry with Aldridge to get him the ball in his preferred spots, and to keep him engaged in games. As we saw in the chart above, the more Aldridge is involved offensively, the more active he’s been in other areas of the game too. The relationship between Leonard and Aldridge in particular has to improve and I’m a bit disappointed that Leonard hasn’t been able to set-up the big man more in their second season together.

Aldridge can still be an All-Star caliber player. But he can’t be that, realistically, if he has to depend on Parker as much as he has been.