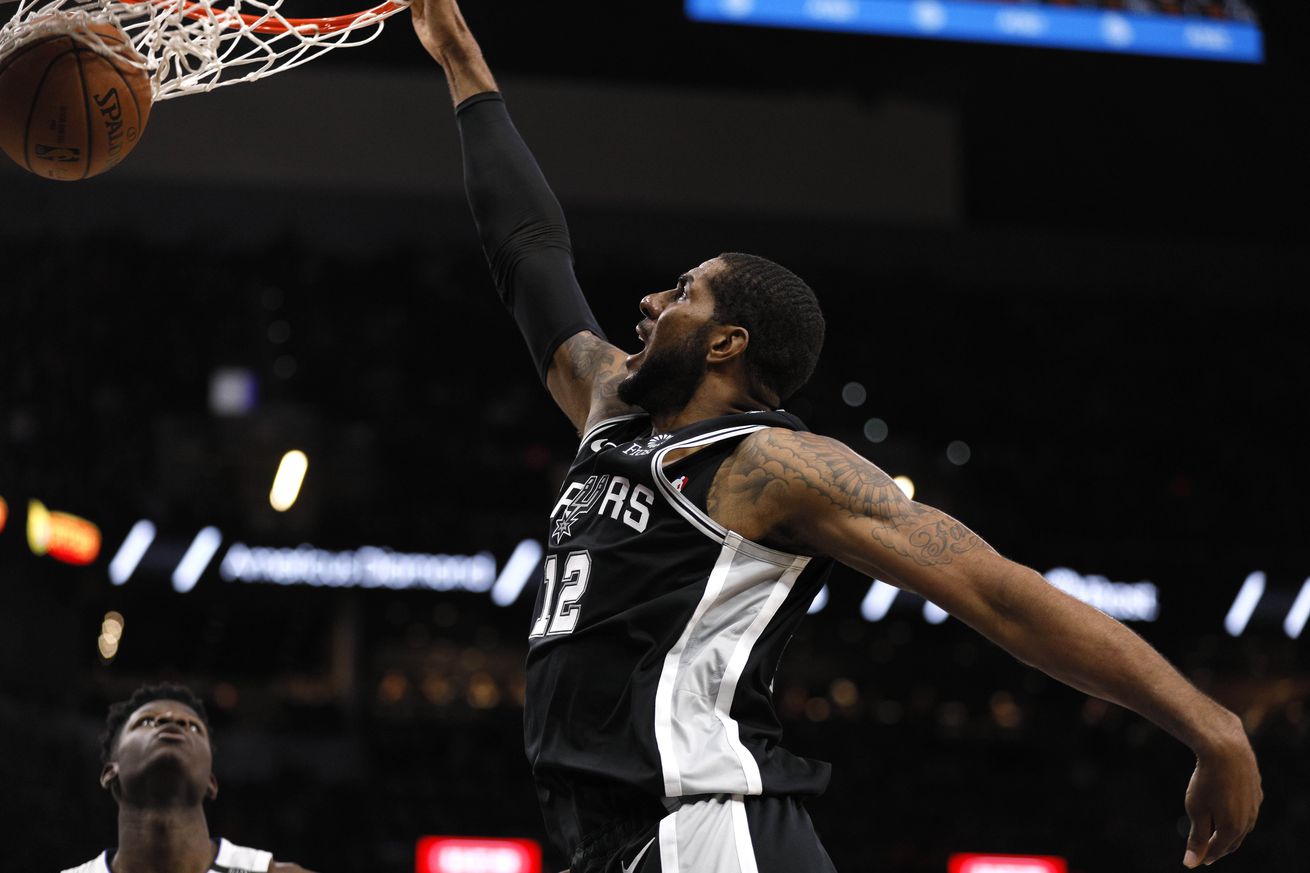 At 33, Aldridge is averaging 21.3 and 9, shooting a career-best mark from the field, and has posted the two highest scoring games of his career. Ho-hum.

Write, talk or (God forbid) tweet about LaMarcus Aldridge enough and you realize few things are as set in the NBA world as the average fan’s perception of LaMarcus Aldridge. Good, bad or indifferent, there’s little that time or another hearty post-up is going to do to change the ossified opinion of a player who has gone about things his own way through nearly 13 pro seasons.

The same notions will probably color the season Aldridge is having, one that should rank among his best, even if it comes with the usual aesthetic and stylistic quibbles that follow him. He’s been a stabilizing force on a Spurs team thrust into a mild rebuild, posting averages of 21.3 and 9, a career-best 51.8% from the field, and an assist rate of 12%, the highest he’s had in four years in San Antonio. He owns the third-highest offensive rating on the team while putting up the second-best block rate of his career and deterring shots around the basket like many of the league’s best rim protectors. The two best scoring games of his career have also come in 2018-19 — 56 in January over the Thunder and 48 on Sunday in a win over the Celtics.

Aldridge excelling well into his 30s feels particularly on brand in San Antonio. A subdued demeanor and methodical game feed into a profile that repels the SportsCenter Top 10. So, too, is how he anchors the league’s 7th best offense, leading all players in post touches for a second season in a row. Depending on the same preconceptions you have of Aldridge and/or the Spurs, the idea of a San Antonio system routinely pivoting around the left block — in the 2019 NBA nonetheless — is either splendidly analogous or characteristically obstinate.

Everyone wants Aldridge to shoot more threes — even he indicated on Instagram that he would last summer. But despite a recent uptick in three-point rate since the All-Star break, he remains a creature of habit that’s comfortable between the hashmarks, and Gregg Popovich has done a terrific job of building an offense around him that still includes enough spacing and movement to keep defenses honest.

Threes or not, there’s plenty to appreciate in what Aldridge does. Face-ups, baseline turnarounds, rip-throughs, strongside blowbys, one-footed step-backs, and pick-and-pops all comprise a game that relies on counters and idiosyncrasies to remain effective. Even in the more absurd mismatches, you might still see Aldridge casually — also see: maddeningly — turn into a fadeaway jumper. Other possessions. however, show the malleability and body control it takes for him to exert his will without being overly aggressive.

There are bigs who appear designed specifically for this era. Long, lithe, and armed with the speed and skillsets of a wing, they form the prototype that teams look for in a frontcourt player. Aldridge is the rock upon which they break.

In the past, Aldridge has appeared to struggle with stockier post defenders who try to leverage their lower center of gravity against him. Less so this season.

Defenders will often try to push Aldridge baseline. He’ll gladly take the shot at times, but he also knows that’s where secondary help is often coming from. If he senses his post defender is overplaying him, rather than spin the other way, he’ll drive directly towards their left shoulder, which can either result in a foul or blowby.

The Spurs are also keeping defenses on their toes in different ways. The same circuitous route Aldridge may take to get established on the block may instead lead to an alley-oop, something they turned to again on Sunday in Boston:

With teammates like Derrick White and DeMar DeRozan feeding him the ball, Aldridge is getting his shots with less work than he did a year ago, as only 40% of his field goals come unassisted compared to 48% in 2017-18. The easier baskets, combined with a concerted effort to establish early position inside, have definitely helped, and it’s all led to a player — and offense — that’s far less predictable than last season, in which he finished alongside DeRozan on the All-NBA 2nd Team.

Earlier this month, LA moved up to 69th in the NBA’s all-time scoring list — a nice career achievement, to be sure, but also one that kind of distills the Aldridge experience into a benchmark that’s both objectively impressive and difficult to appraise, at least at first blush. Include his 7,500-plus rebounds, and you narrow the historical field to 30 guys, which begins to contextualize his career production. As he continues to plod up both lists, it’ll be interesting to see how the conversation around him shapes out, and whether enough steady goodness can ever spell greatness.

The Spurs big may see his name on the All-NBA list for a second year in a row, and 6th time overall. If so, it’ll be another feat in a career that’s quietly approaching Hall of Fame merit. If he ends up being overlooked by the national media, well, that’s something Spurs fans will be fairly familiar with too.