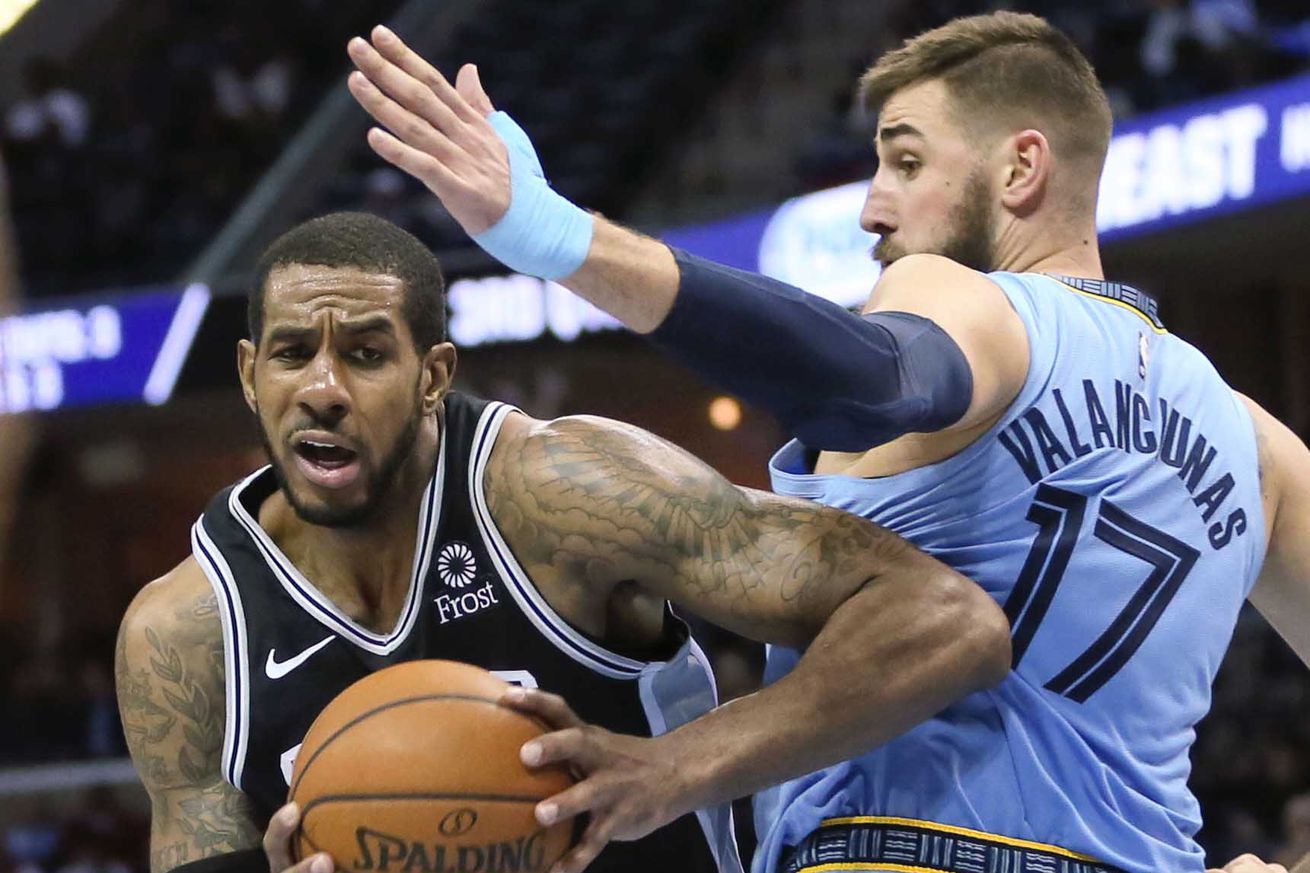 The big fella play down the stretch clinched a W that San Antonio had to have.

There are a lot of reasons the Spurs found themselves in a 1 possession game down the stretch against the Grizzlies on Tuesday night. Missed switches, miscommunication and poor help on one end combined with wasted possessions and bad shot selection on the other provided more than enough opportunities for the Grizzlies to turn what had once been a double digit lead into a 1 point game. But there’s only 1 reason the Spurs held on for the win: LaMarcus Aldridge.

Trailing 99-98, Memphis brought the ball into the frontcourt and called timeout. From that point forward, LaMarcus carried the Spurs. In the final 5:26, he scored 7 of their 9 points on 3/3 from the field and 1/2 from the free throw line, grabbed 2 rebounds and blocked 2 shots. Rudy Gay added 4 rebounds, 2 assists, and a block but didn’t take a single shot, while the rest of the Spurs combined to go 1/7 for 2 points with 1 rebound and 1 assist.

LaMarcus started it off with a nice rotation in from the weak side for a block on Jaren Jackson Jr. that led to a run out and a Marco Belinelli layup (the only Spurs points in this stretch scored by someone not named Aldridge).

Rudy played some great post defense in this game, against both Jackson and Jonas Valanciunas, but he’s matched up against a long and explosive young player here, and can’t quite slide his feet fast enough to keep up. Jackson gets a shoulder into Rudy’s chest and gets by him on his way to what could have been an easy bucket.

But LaMarcus has already dropped into the lane by the time Jackson gathers. LaMarcus blocks the shot just as Jackson is releasing it, and the ball falls straight down into his hands.

Marco takes off down the right side of the court, DeMar fills the lane on the left side, and Patty brings the ball up the middle. Avery Bradley does the right thing by trying to get on Marco’s inside shoulder, but he’s never able to catch up, leaving an opening for an easy bounce pass and layup that gave the Spurs’ a 3 point lead.

Then he tipped in a DeMar DeRozan missed jumper to briefly put the Spurs back in front.

He followed that up by hanging a couple of buckets on Valanciunas to retake the lead and add a little cushion.

The footwork on that second bucket is wonderful. LaMarcus makes the catch fading back to his right with his back to the basket, but immediately reverses course, taking a single dribble back around Valanciunas to get back to his right hand and lay it in. The Grizzlies’ new big man didn’t have a chance.

Then, after missing 1 of his 2 free throws, which would’ve given the Spurs a much safer 3 point lead, LaMarcus committed what ended up being the game saving foul.

Jackson gets LaMarcus to bite on a very deft ball handling move, bringing his right hand over like he’s going to pull up for the three and the win, before driving to his left. LaMarcus recovers in time to swat down hard on the ball. Though he gets the ball first, he also gets an awful lot of arm. It would’ve been nice to get a clean strip, but LaMarcus makes the right decision to prevent Jackson having a chance at an and-1 at all costs. It paid off, as Jackson missed the free throw he needed to make, then accidentally banked in the free throw he needed to miss.

The game wasn’t over, yet, though. The Spurs still needed to inbound the ball and maintain possession, something they’ve had a few struggles with this season. But it was LaMarcus to the rescue, again.

This is a clever bit of misdirection. DeMar cuts off LaMarcus’ hip to force Jackson and Avery Bradley to switch, so when LaMarcus comes to get the ball, he’s got a 6’2” defender on him and all Rudy has to do is throw it up in the air.

There’s no such thing as a bad win, but this is as close as it gets. San Antonio’s defense continues to struggle to execute at the most fundamental level and the Spurs’ nearly stumbled into the All-Star break riding a 5 game losing streak and just a half game ahead of 9th place. It would’ve been a terrible loss, but thanks to LaMarcus’ heavy lifting, they broke the losing streak, and began their 10 day break on a good note.