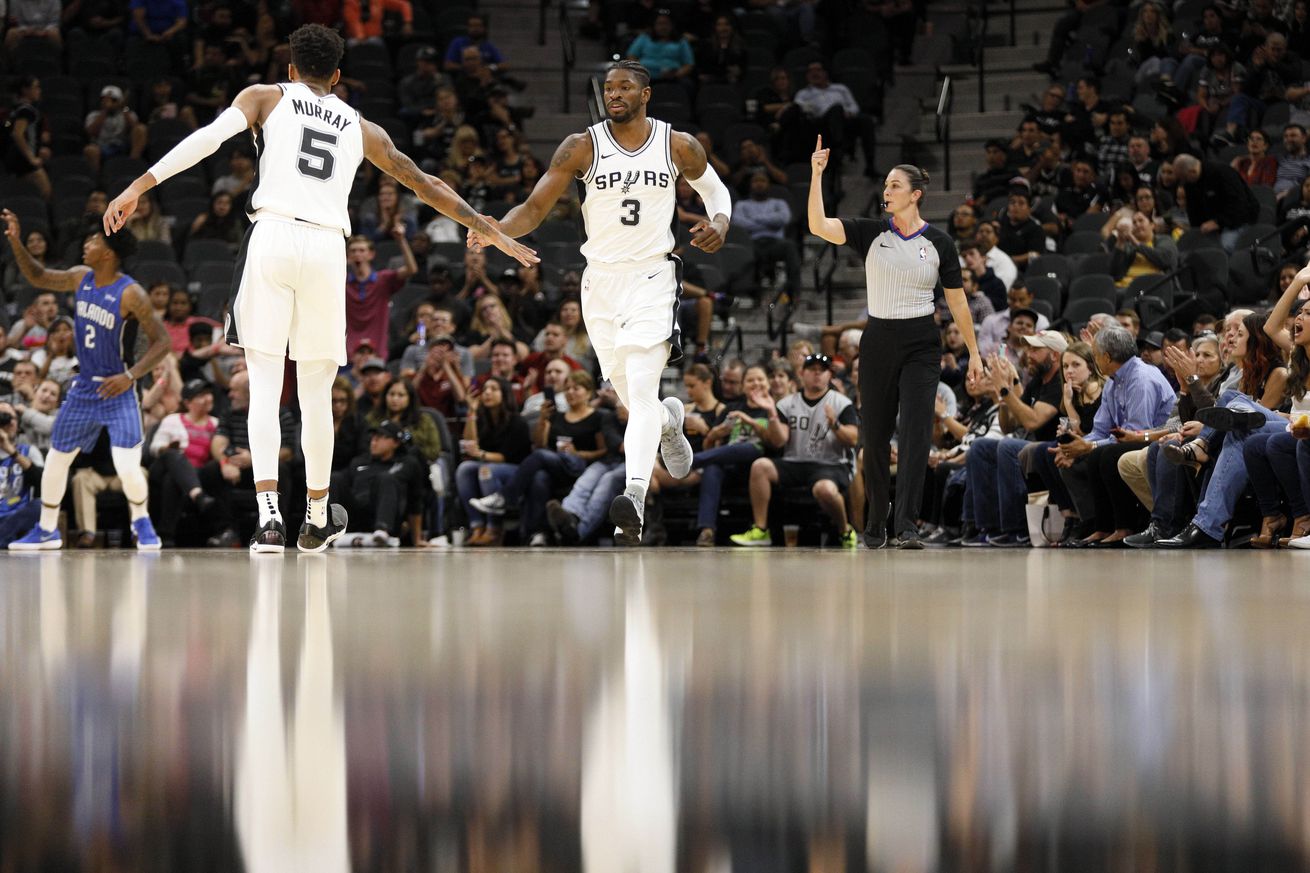 The Spurs had a full roster for the first time in their Monday win against the Nets. The minutes limits are being eased. The starting lineup is returning to normal. It’s an exciting time in San Antonio.

For some members of the team, however, it means the biggest part of their season is over. There will be no more starts, no night in which they play 25 minutes and take 15 shots. The Spurs’ terrible injury luck allowed some players to get a taste of how it feels to be a main rotation guy on a good team. Now they’ll return to supporting roles and hope to have big moments when called upon.

Yet we shouldn’t forget those who responded well to the challenge. The Spurs have the third best record in the West because the unheralded players on the roster proved that the “next man up” mantra actually means something in San Antonio.

Dejounte Murray isn’t ready yet to be a starting point guard. He was asked to be one and obliged. He was then asked to come off the bench with an entirely different group of players and did just that. His performance was up-and-down, which isn’t surprising. Most 21-year-old prospects are inconsistent. His willingness to do what the team needed from him and to play through mistakes, however, is not as commonly found in young players.

At least Murray, as a former first round pick, knew he didn’t have to worry about being cut to make room for veteran reinforcements. Bryn Forbes had no such guarantees. This was his chance to cement his place in the NBA, however, and he didn’t let it slip. His silky smooth shot started to fall, providing hugely important backcourt scoring. The undrafted marksman even got a few starts and proved he could be feisty enough on defense to hold his own.

Brandon Paul was even less of a known commodity than Forbes. Paul was brought in after a long career overseas to give the bench a jolt of athleticism after Jonathon Simmons’ departure. His defense was his calling card, and it was as good as advertised. What no one was expecting was a hot shooting start of the season that made it easier to weather the absence of Kawhi Leonard.

While Murray, Forbes and Paul started the season getting minutes, Davis Bertans had to wait for a couple of other injuries to gain a rotation spot. Everyone knew that he could change games with his shooting, but Pop wanted to see improvement elsewhere before entrusting him with minutes. He showed a renewed focus on rebounding and the same energy he always displayed on defense and earned his playing time.

Somehow, those four have managed to collectively give Gregg Popovich a shade over 2,000 quality minutes to keep San Antonio winning. It was as unexpected as it was welcomed in an atypical season in which several teams that were projected to be good struggled out of the gates.

Now their roles will shrink. With Tony Parker back, there will be fewer minutes for the backup guards. Kawhi Leonard and Kyle Anderson are healthy again, so (unless Rudy Gay’s heel scare holds him out for long) playing time at the forward positions will be harder to come by. Some of them — Forbes, most likely — will remain in the rotation, but will not truly be relied upon unless injuries strike again.

Their early contributions shouldn’t be forgotten. It’s hard to tell what the Spurs’ ceiling is. Hopefully, we’ll find out soon if everyone is able to stay healthy. We do know for sure that Murray, Forbes, Paul and Bertans helped prevent their floor from crumbling when injuries shook the very foundations of the team. That deserves appreciation.

Tony, pulling up from the elbow

Tony Parker has looked rejuvenated since his return. As previously covered, he’s actually playing like his younger self, getting to the rim a lot and finishing well once he’s there. It’s been comforting to see that he still has enough quickness to knife through defenses. Now, it would be nice to see Tony focus on regaining his form on the elbow pull up jumper he’s worked so hard to develop over the years.

Parker is taking fewer jumpers and living in the paint. Again, that’s good. But he’ll need to be able to make shots when defenses dare him to take them. So far, he’s connecting on 38 percent of his looks from mid range. In the past two years he shot 47 percent and 42 percent, respectively. He’s always done better from the elbows, so he should start there, then hopefully extend his range once again.

It’s great to see Tony driving often again, but that elbow jumper is essential to his game. I’d love to see him honing it in the regular season, so it’s there when he needs it in the playoffs.

The prettiest set that never, ever works

The Spurs have plenty of sets in their playbook. Some are complex, some are rather straightforward. The one I’m about to show you is, in my eyes, the prettiest of them all.

It features a big man passing out of the free throw line, perfectly choreographed perpendicular cuts to the basket and screens at the elbow extended for the cutters to use as they transition into a pick and roll if the initial action failed to create a good look.

It’s just so beautiful. The Spurs ran it against the Kings and Nets and I’ve seen them run it from time to time for the past few years. And I’ve never seen it work.

You’ll have to trust me on this, because there’s no stat available, but that gorgeous play just doesn’t result in buckets. It’s possible it has at some point and I’ve missed it, but it’s not nearly as effective as it should be. Not on the initial cuts or the following options. I’ve been trying to find out why, but can’t exactly pinpoint the reason. It’s as if the set is cursed.

Take this other example. The screeners at the post shrink the room for a hand-off and the space to thread a pass to the cutter, but the Spurs have great passing big men. Gasol is able to make this pass to Leonard.

But he didn’t. It’s extremely weird and something I always notice. So will you now that I’ve showed it to you. You can’t unsee it. You’ll now feel the same anticipation I feel when they get ready to run that play and the same disappointment I’ve felt hundred of times when it failed to create an easy bucket. You’re welcome.