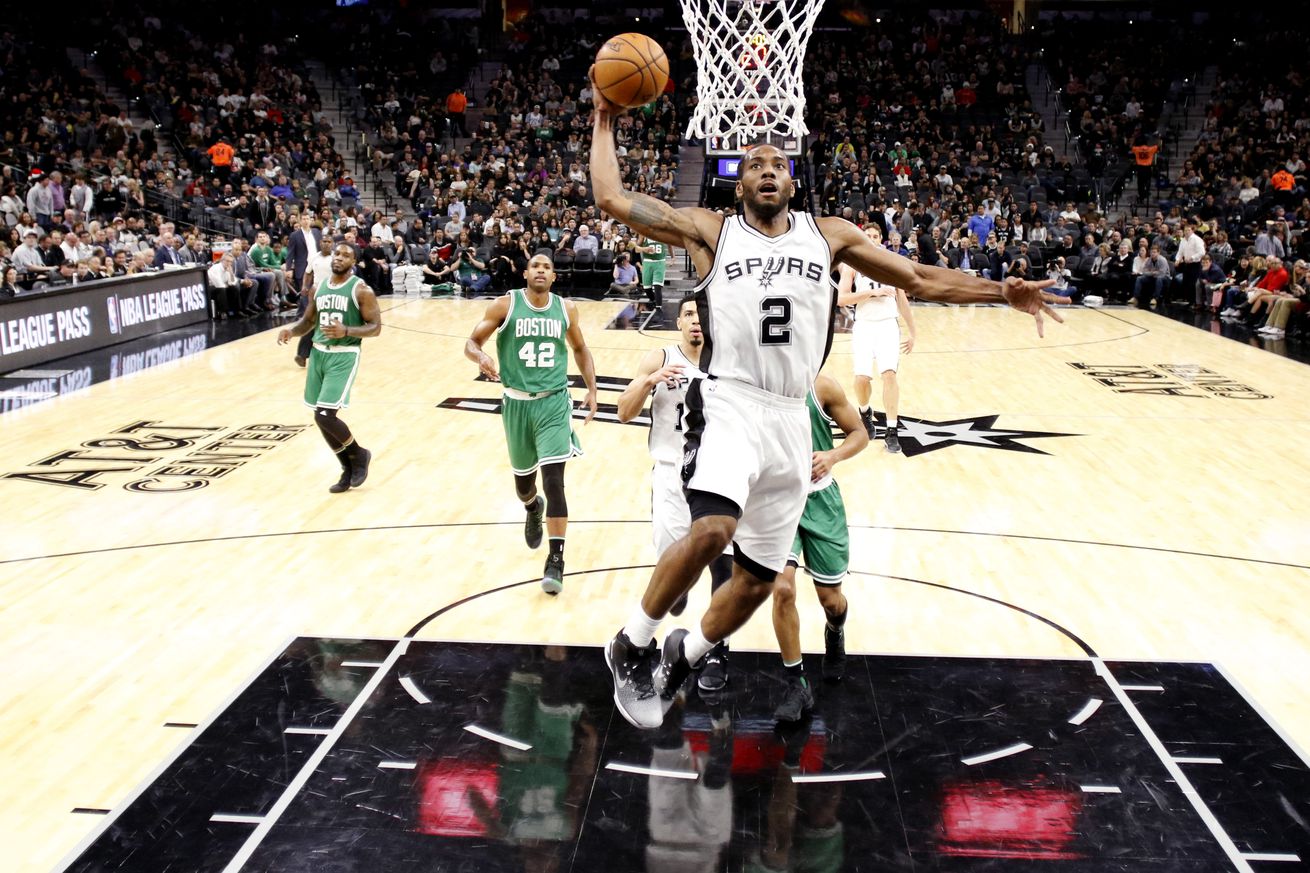 Sure, James Harden or Russell Westbrook will win the 2016-17 MVP award, but what if someone else deserves consideration?

The Spurs’ sustained success as an organization can make it difficult to appreciate the individual ebbs and flows of its players, especially when a narrative latches on. For Kawhi Leonard, there was a certain cross-section of people in and around the league that felt the San Antonio system was propping up his offensive production. And while fans have (mostly) moved beyond that assessment this season, it can take time for perception to fully catch up with reality.

He’s still a dynamite defender (despite some weirdness in his numbers) who will in all likelihood finish on the All-Defensive 1st Team, even if he misses out on his third-straight DPOY. Pair that with his history-chasing percentages, low-low turnover rate and alpha role (10th in the league in usage rate) on the league’s second-best team, and you get the beginning to a conversation people should already be having: Leonard is the league’s most dynamic two-way superstar.

With the 25-year-old amid the best scoring stretch of his career (30+ points in six straight games), it’s a good time to focus on that end of the floor, where he may be making his greatest impact this season, according to metrics like RPM and Win Shares.

Leonard is one of the league’s best scorers in the pick and roll (95th percentile), but an equally capable passer. His improved timing and understanding of angles have made plays like this common, as the team becomes less reliant on Tony Parker.

A lot of the offense going through Leonard. He finds Lee rolling for the slam here. pic.twitter.com/VJ1gWFpfh1

Being a greater dual threat in the PnR opens things up for him, as he can make opponents pay for over-committing or for hesitating. That ability to read and react makes him much less predictable in years past, and defenders have to continually account for him now that he’s risen to become one of the NBA’s best mid-range shooters. Against Charlotte, he faced similar defenses from the same spot just a minute apart, but produced two different looks for his team.

The Spurs offense has a funny symmetry to it, with LaMarcus Aldridge preferring to get the ball on the left elbow

and Leonard being especially proficient shooting from the right side of the floor. That’s how a majority of the starting lineup’s possessions will start.

All that green from the highest-volume spots illustrates how it’s been working, especially for Leonard. Third-option Pau Gasol has done a great job of sliding into the cracks and facilitating a free-wheeling offense that works largely because its most important players are a threat whenever and wherever he catches the ball.

That includes scoring off the left block whenever Leonard gets the chance, a part of his game Zach Harper recently did a great deep dive on. I encourage you to give that a read if you haven’t already, and will simply include what might be Leonard’s most effective move of all in those plays: the baby hook.

Feels like we’ve seen less of the Kawhi baby hook this year, which is still probably his hardest move to stop pic.twitter.com/7qgEWjiVVo

Just like last season, Leonard remains a lethal shooter off the catch, with a 64% effective field-goal percentage on those possessions. When you see how good he is from essentially everywhere on the floor, you get an idea of the kind of gravity that can create for his team.

Parker is still an important part of the Spurs offense, but his forays into the lane are essentially unchecked from help defenders now. A big part of the reason is the extra attention teams must pay Leonard, who shares the floor with Parker more than any other Spur. Here, Parker’s initial drive results in a switch onto LaMarcus Aldridge, who then benefits from a wide open look as the defense rushes to Leonard’s weak side in unison.

The Klaw’s counting stats look downright humble next to the triple doubles that guys like James Harden and Russell Westbrook are putting up. No single number captures his offensive greatness in the same way, but it would seem we’re moving past angles like that deciding a players’ true value.

Leonard’s value is in his ubiquity, the end-to-end talents that pervade across the board, and in his incredible efficiency in the face of elite-level usage. He’s 10th in the league in scoring at 25.5 ppg, while upping his assists to over three per game. Only one other player has ever put up those points and assists while averaging under two turnovers a game. He’s also just 1 percentage point shy of a 50-40-90 season, a feat that only four players have accomplished in NBA history when scoring 25 points a game.

If he comes up short of the latter, it’s still impressive. But if he becomes player number five, you can start to cobble together the resume of an MVP, combined with an All-Defensive 1st Team and a team record that will likely be significantly higher than that of Houston or Oklahoma City, especially if the Rockets continue to slide. Most other candidates (Harden, Westbrook, Isaiah Thomas and even LeBron James) don’t carry Leonard’s nightly defensive workload, don’t have the same team success (Greek Freak, Anthony Davis) on or find themselves on one of NBA history’s great superteams (Warriors, Knicks).

All the points above carry their own caveats, and that’s kind of the idea. This year’s MVP race shouldn’t be as clear-cut as it’s often assumed, and a greater conversation of the candidates should definitely include the all-around brilliance of Kawhi Leonard.