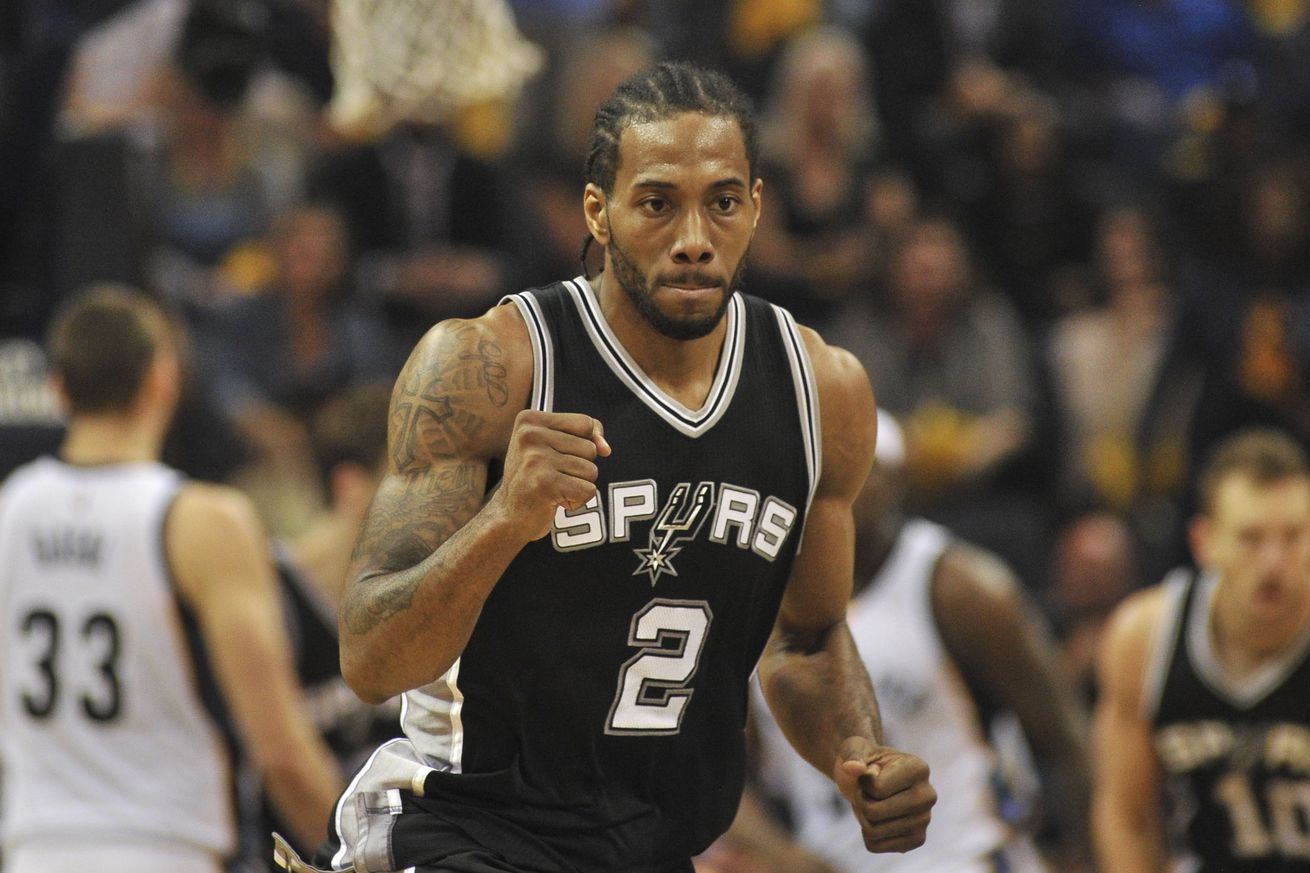 Kawhi Leonard had the league’s best first round of the postseason, and maybe of all time.

Kawhi Leonard’s first-round was so brilliant, it is difficult to put into words. Spectacular, dominant, superlative, historic – none of it quite captures what the Spurs star did against the Memphis Grizzlies. That’s why I’m going to put it into numbers instead, starting with a comparison of Kawhi to his peers so far this postseason, using advanced metrics that aim to convey overall performance. No one statistic is perfect, so a look at a few in tandem will demonstrate why words alone don’t do Kawhi justice.

By now, nearly everyone is familiar with John Hollinger’s PER (Player Efficiency Rating) statistic. This chart shows a ranking of PER among all players who have played at least 60 minutes this postseason. And this group passes the eye test. If you watched most of the first round and chose the eight best players, you’d probably answer with this group, in some order (you may also mention Gordon Hayward, whose statistics are weighed down by his nine minutes played in Game 4, due to food poisoning). Two things on this list stand out: Kawhi is leading the field by such a wide margin, and he’s also the youngest player of the group.

Win Shares measure how many wins a player contributes to his team. One thing to note with this statistic is that it’s cumulative, so Leonard is helped by the fact that his series went to six games, where guys like LeBron James and Steph Curry led their teams to first-round sweeps. However, Leonard is so far ahead of the pack with his two Win Shares, that it is highly unlikely those two extra games would’ve made any difference in this ranking. Again Kawhi’s lead is massive; there’s more room between him and second place as there is between second and tenth.

Inpredictable.com developed a statistic called Win Probability Added (WPA), which they describe as, “Win probability added (or subtracted) by a player due to made/ missed shots, getting fouled, made/ missed free throws, and turning the ball over.” So far, Leonard has lapped the field in this statistic. Curiously, Russell Westbrook ranked dead last (216th) among qualified players in Win Probability Added at -0.41. I wonder if any regular season MVP voters are second-guessing their decisions.

Finally, a statistic where Leonard ranks a mere second-place. This is NBA Math’s Total Points Added (TPA) stat, which if you’re interested, you can see how they calculate here. It’s basically another stat to try and quantify a player’s effectiveness on both sides of the court. Chris Paul just barely edges Leonard in terms of TPA. [This graphic was created prior to the Clippers’ victory Friday night over the Jazz, so Paul now has three-point edge over Leonard in TPA.] And, for the sake of balance, Westbrook ranks third in this statistic. I’m a little dubious of the “Defensive Points Saved” component of the TPA model, if for no other reason than David Lee tops all Spurs. But, in small sample sizes, crazy things can happen.

In case you’re exhausted from all these new-fangled stats, try this on for size. Among players with a usage percentage of at least 20, Leonard has the highest TS% (True Shooting Percentage) and leads everyone with a historic Points Per Shot of 1.803, more on that later.

How has he been so effective? Well, he’s doing a ton of damage from mid-range. Of the 24 players to have taken at least 20 mid-range field goal attempts in this postseason, Kawhi ranks second, just below Kyrie Irving, shooting an absurd 62.1% on those shots. Exactly two-thirds of Kawhi’s made field goals have been unassisted, per NBA.com, which means he is shooting pull-up jump shots at an extremely high rate. Of the 24 players to have taken at least 30 pull-ups this postseason, Leonard ranks second in eFG% at 57.8%, behind only Steph Curry. As his shot chart shows, he’s been effective from nearly everywhere during these playoffs:

Where Kawhi has really dominated has been in the fourth quarter. You could argue that a play in the middle of the second quarter is just as significant as one at the end of the game, but in the NBA you simply will not blow out your opponent every night. The competition is too strong. So as the clock winds down (and when the defense sells out to stop the biggest threat) great players decide games. Check out Kawhi’s herculean fourth quarter numbers through Round 1:

Specifically in the clutch (less than five minutes to go with the score within five points), Kawhi is shooting 57.1% from the field, 66.7% from the arc, and 100% from the line; and the Spurs have outscored opponents by 32.5 points per 100 possessions with him on the floor.

Clearly, Leonard is outpacing his peers thus far this postseason, but how does he stack up all-time? It’s a tricky question to answer because Basketball Reference doesn’t isolate stats from a single series. As a result, we have to compare Kawhi’s first round performance to previous superlative postseason runs. Either way, these comparisons show us what Leonard is on pace to do.

Another stat used to measure efficiency is Points Per Shot. When you look at the 100 highest scoring postseasons of the Three Point Era (since 1980), Kawhi has the best Points Per Shot figure in history. This is the result of his absurd accuracy from the field, coupled with his ability to get to the line and make free throws.

On top of that, Leonard is also contributing to winning basketball games at a higher rate than anyone in playoff history. So far, Leonard’s performance ranks first all-time in Win Shares per 48 minutes at 0.420, comfortably ahead of LeBron’s 0.399 mark he set in 2008-09.

While there’s no guarantee that Kawhi will be able to sustain this nearly unprecedented performance through the playoffs, even if there is some regression, he is on the road to having one of the league’s greatest individual postseason performances. In their next round matchup against the Rockets, the Spurs will continue to lean heavily on their superstar and we will see what the reigning Defensive Player of the Year is capable of as he enters his offensive prime.