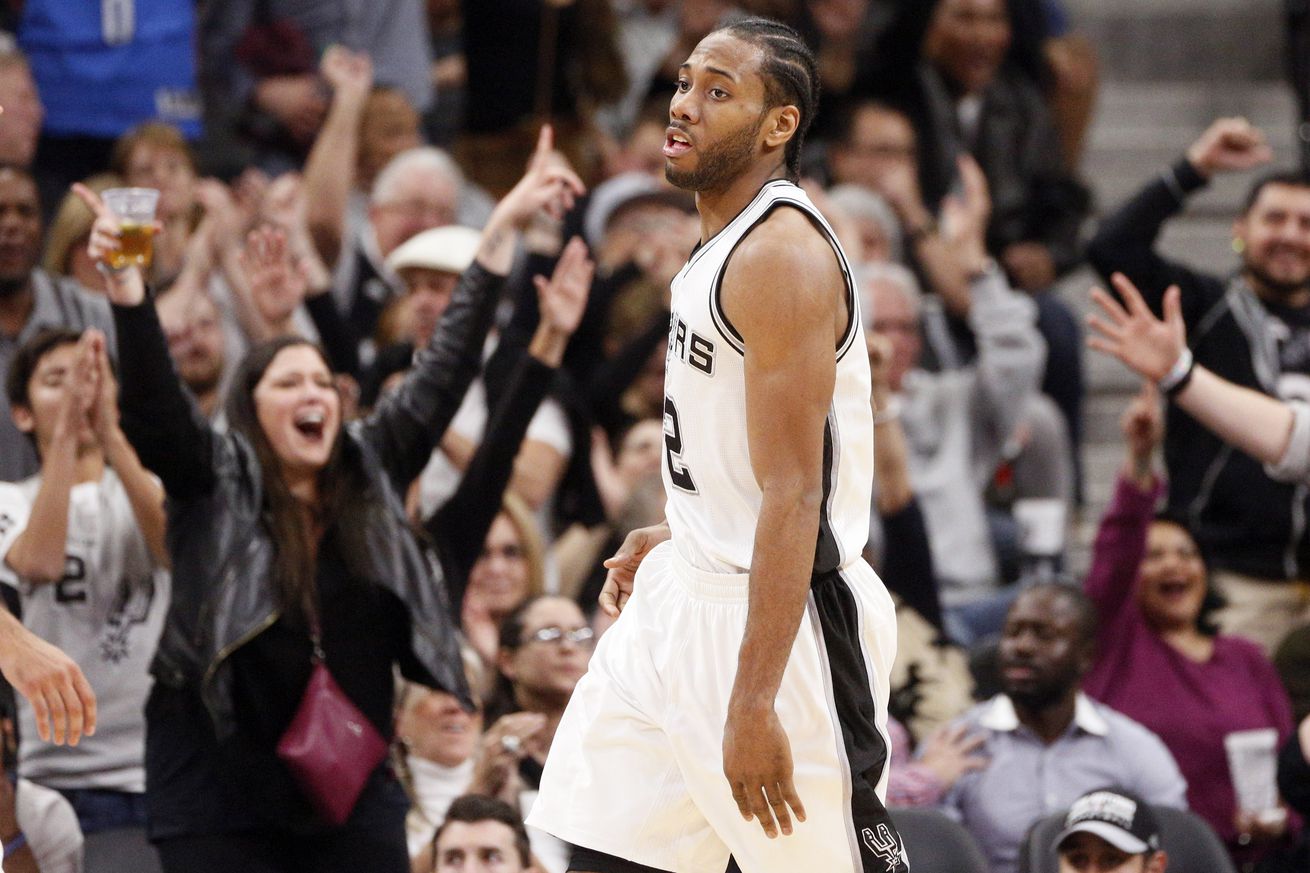 In a fourth quarter to remember, Leonard made one impressive basket after another. And then he really topped himself.

You may already know this, but Kawhi Leonard is pretty good at the basketball thing. I mean, besides the whole amazing at defense part of his game, there’s this emerging scoring trend that he started this year, and it’s showing no signs of slowing down; if anything, it’s accelerating.

So, maybe he’s one of the four best players in the NBA, maybe he has a case to be this year’s MVP, and maybe one day he’ll let those cornrows out in public.

someone photoshopped an afro on Kawhi Leonard. He looks terrifying pic.twitter.com/hyfrTzkbi1

Regardless of all of the above, there was a game he played on Tuesday night against the Oklahoma City Thunder. The Spurs were up big (18 points) and then after a 22-2 run by the visitors, the third quarter ended with San Antonio up by just four.

Then Kawhi went for 12 in the fourth quarter as the Spurs put up 29 and held OKC to just 19 while holding Russell Westbrook scoreless. That sounds alright, you might think, now let’s get on to the next cool thing. After all, Kawhi dropping 12 points in 12 minutes is nice, but it’s not worth its own article, is it?

To which I’ll reply, it depends on how he scores them.

He canned a crazy deep three about halfway through the period:

It’s safe to say that Kawhi is feeling it. #Kawhi pic.twitter.com/nYrsTABUtq

And seconds later, he just ran by the defense and crammed it — in half court, no less.

This is getting ridiculous. Kawhi’s just feasting. #Kawhi pic.twitter.com/zCxlQpkGgF

But the play that stopped the show was his — well, I don’t quite know what to call it…

Leonard begins the play beyond the three-point line with Victor Oladipo on him. He breaks down with two quick dribbles, the second one between his legs which leads him to his right and causes Oladipo to sprint towards the baseline to stay with him. But just then, with another couple of one-two dribbles, Kawhi stops and Oladipo continues past, opening a path to the lane.

Here’s where the crowd makes its first sound — one of those grumbling, muttering, murmurs that’s not quite an “OHHHH” moment, but instead happens in anticipation of one. Now with the ball in his left had, and only Steven Adams between him and the basket, Kawhi takes two left-handed dribbles and accelerates. So far, it’s going well, and Leonard has freed himself from Oladipo’s defense with a pretty combination, but at this point it’s nothing but some flashy ball handling.

But as Leonard approaches the paint, and Adams leaves Dewayne Dedmon to defend the rim, Kawhi elevates:

And the play cruises right past “OHHHH” moment territory, and heads right to the career highlight reel. It didn’t just help win the game, it elevated a hum-drum January contest one of those I-saw-it-live/I-was-there affairs. The mid-air adjustment, the double-clutch, the swirling, blind lefty finish; it all combined into one an unforgettable play.

How the crowd celebrated. How the bench went nuts. How Kawhi reacted? Well, here’s the whole play including the aftermath to give you the complete story.

There’s no telling what was going through that buttoned-down brain of his, but it’s sure to have been less “That was a pretty good shot” and more “Now I will hit this free throw.” Which he did before getting back to work closing out the game.