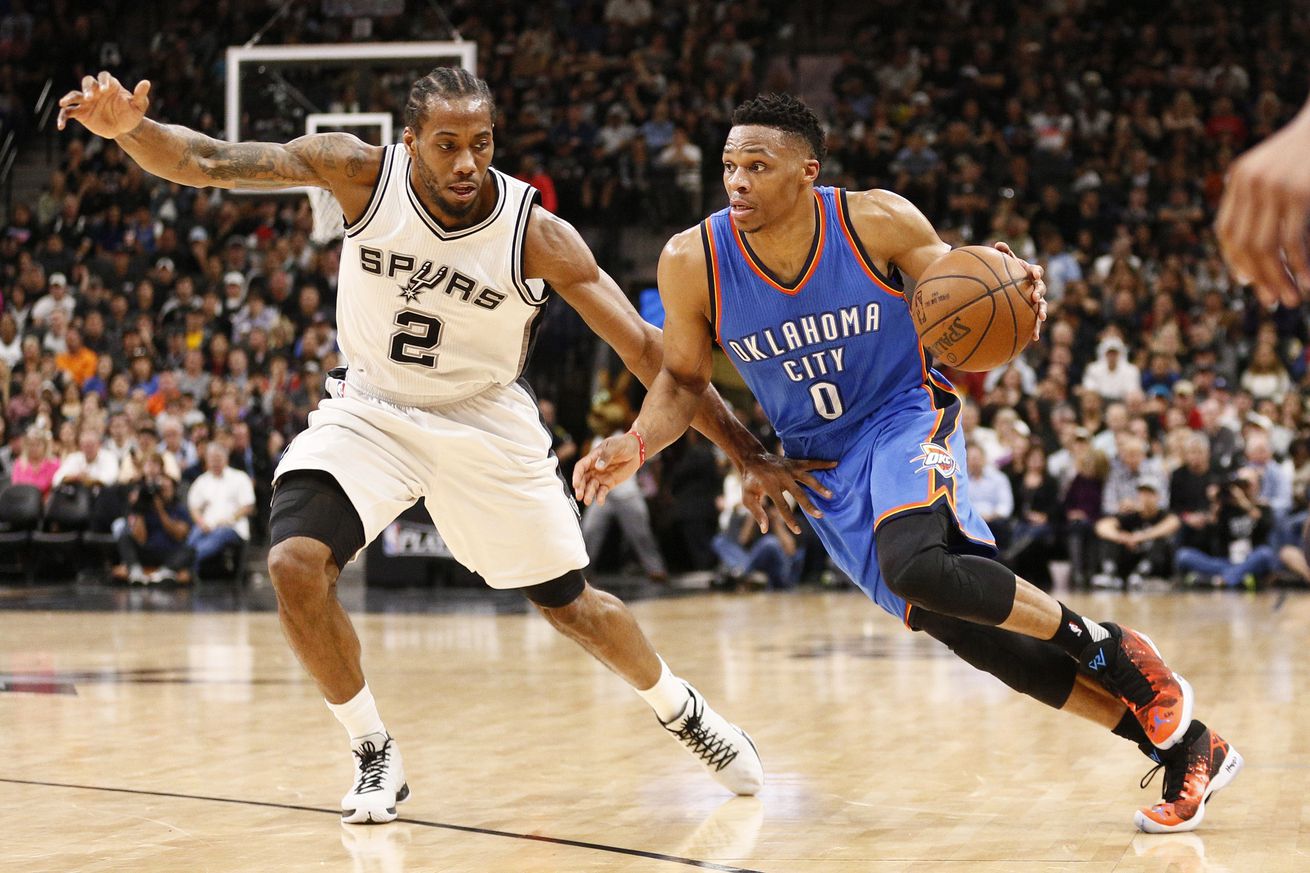 In the year of the triple-double, the MVP narrative does not favor last year’s runner up. Fortunately, all Kawhi cares about winning are basketball games.

Interested in shutting up all the triple-double talk? Preventing the triple-double is one way. It irks yours truly to no end that Kawhi Leonard, last year’s runner up to the MVP, isn’t in the middle of the MVP conversation this year thanks to Russell Westbrook and James Harden penchant for putting up double digits in – holy Toledo – THREE CATEGORIES!

Westbrook, who has to do it all for this depressing 28-21 husk of a Thunder team, might even average a triple-double for the season. This is like a Major Leaguer batting .400, or winning baseball’s triple crown. Of course, Miguel Cabrera won the triple crown in 2012, so it wouldn’t surprise me at all if Westbrook can stop his nuclear core of energy from melting down just long enough to actually average double digits in points, rebounds and assists.

I doubt that Leonard is motivated by such petty things as MVP rankings and triple-double talk, but he and the Spurs came into Tuesday night’s nationally televised game against OKC on their first losing skid in almost three months. As Gomez and Connolly broke down, the Spurs have struggled in losses to maintain their pace and production of quality shots, which lately resulted in ugly losses to New Orleans and Dallas. Last night, they threatened to do the same thing thing against OKC, turning an 18 point third quarter lead into a 3 point deficit.

Then, as one bad quarter teetered toward another Kawhi decided he was done with the Spurs’ sluggish pace, done with Russell Westbrook, and done with the ghost of the Thunder team which ended his season a year ago.

You can add this one to the Kawhi Leonard highlight reel pic.twitter.com/p9vys9pZ49

Kawhi debunks playoff revenge theory: “We lost two games, so we were fired up off that, really. Didn’t want to lose a third.” #Spurs

Mr. System Player put up 36 points (he had 37 until ever-earnest Scott Foster discovered he’d shot a technical free throw while not technically in the game) and grabbed 8 rebounds. Westbrook essentially matched him, but was held to zero points in the fourth quarter.

Followers of the NBA as a whole know this season has seen a lot of bizarre story lines coming from New York, Chicago, and especially from the public comments of LeBron James — this is not new. What’s fascinating to me is the heated MVP race between two players (and former teammates!) in Harden and Westbrook, both unquestioned Alpha Males on teams which most NBA authorities would say have little to no chance of winning a championship this year. Right now, they are the frontrunners based mostly upon a quirky and largely arbitrary stat threshold made hallowed by the neatness of its narrative and by the way it describes just how much these two players have to do for their otherwise mediocre teams.

Left on the outside are the guys like LeBron, who has won the MVP some fifty times before, and Kevin Durant, since everyone got together in the offseason and decided he’d forfeited future awards by joining Golden State. And also, Kawhi Leonard. He’s only 25, but I’m already starting to get the feeling that Kawhi is destined to be a Patrick Ewing or Tracy McGrady-esque superstar, always in the running but never quite getting over the MVP hump because there’s always a player out there with a better narrative. Case in point: Leonard has scored 30 points or more in seven of his last nine games, a fact that’s only really registering with Spurs fans and followers. What’s unclear is how that’s moved the needle on his MVP candidacy; ditto on the Spurs’ 63 win pace the season after Tim Duncan’s retirement.

Looming over the conversation has to be the question of what this Spurs team will do in the playoffs. While Leonard and the Spurs aren’t dealing with the stratospheric expectations that the Warriors and LeBron have, he’s also not looked at in the same way as Westbrook or Harden. For reasons beyond their control, each of them were cut off from the Thunder’s once-powerful core and forced to lead teams facing a steep talent deficit compared to their conference’s elite. Because of that deficit, a certain amount of sympathy accrued to each of their causes, at least this year. But Kawhi is different. The Spurs ARE the elite. Second tier, of course, but still seen as more capable of shocking the Warriors than Houston or OKC.

Leonard is also the only true two-way player of the bunch, perhaps even the only rival to LeBron among wing players. He’s now capable of affecting a game on the offensive end to the same extent Westbrook and Harden do, but he’s far more capable of disrupting an opposing offense. As a consequence of his ever-expanding ability to cover both ends of the court in the shadow of his giant hands, it become even more disappointing when he falls short. If Westbrook and Harden go down this spring, it’ll be as scrappy underdogs who were never expected to win the big one anyway. But Kawhi is more like LeBron, more like the Warriors. He can do more, so we expect more. It’s a compliment, for sure. But it also means that there could be lingering skepticism until he wins a title on his own, without Timmy. Such is life when you succeed a 5-time champion and GOATPUFF.

.@iamisiahthomas on @kawhileonard: “He’s the MVP of the league and the best two-way player in the league right now.” @spurs @poundingtherock

And maybe Kawhi will eventually win that MVP award, even with those other guys around to hog the spotlight. He might have to average a triple-double to do it. Tuesday night, he came close to a double-double but only registered 4 assists, which is actually above his season average of 3.2 per game. So he’s a long way from Westbrook’s numbers. But if the Spurs ever figure out how to consistently make shots for four quarters, anything is possible.

Tweets of the Night (Other Guys Edition)

Told that he had his refuse-to-lose face on in 4Q, Kawhi said, “It’s not just me out there that put that face on, it was the whole group.”

Ginobili on Simmons’ chase-down block in 4Q: “He looks like a guy at the Olympics trying to go high jump. Unbelievable athletic ability.”

A reporter asked Simmons if he’d send flowers to Semaj Christon, whom he demolished with a monster block. “I might,” he said.

Manu was asked when was the last time he had a chase down block similar to J Simmons’. Joked Manu: “I had one today. It wasn’t like that?”

Dedmon started and finished with 6 points, 8 rebounds, 3 steals and 1 block. He is 4-0 as a starter. #Spurs

Stealing the #TurdQuarter hashtag from Heat Twitter until the Spurs decide that playing 48 minutes is important.

Popovich, on @DGreen_14 D on @russwest44 “He set tone defensively and did really good job on a great player to start game; it was important”

Pop on not calling time during 22-4 run by OKC: “I let them figure it out. I didn’t love doing it. I was a nervous wreck, but we did it.”