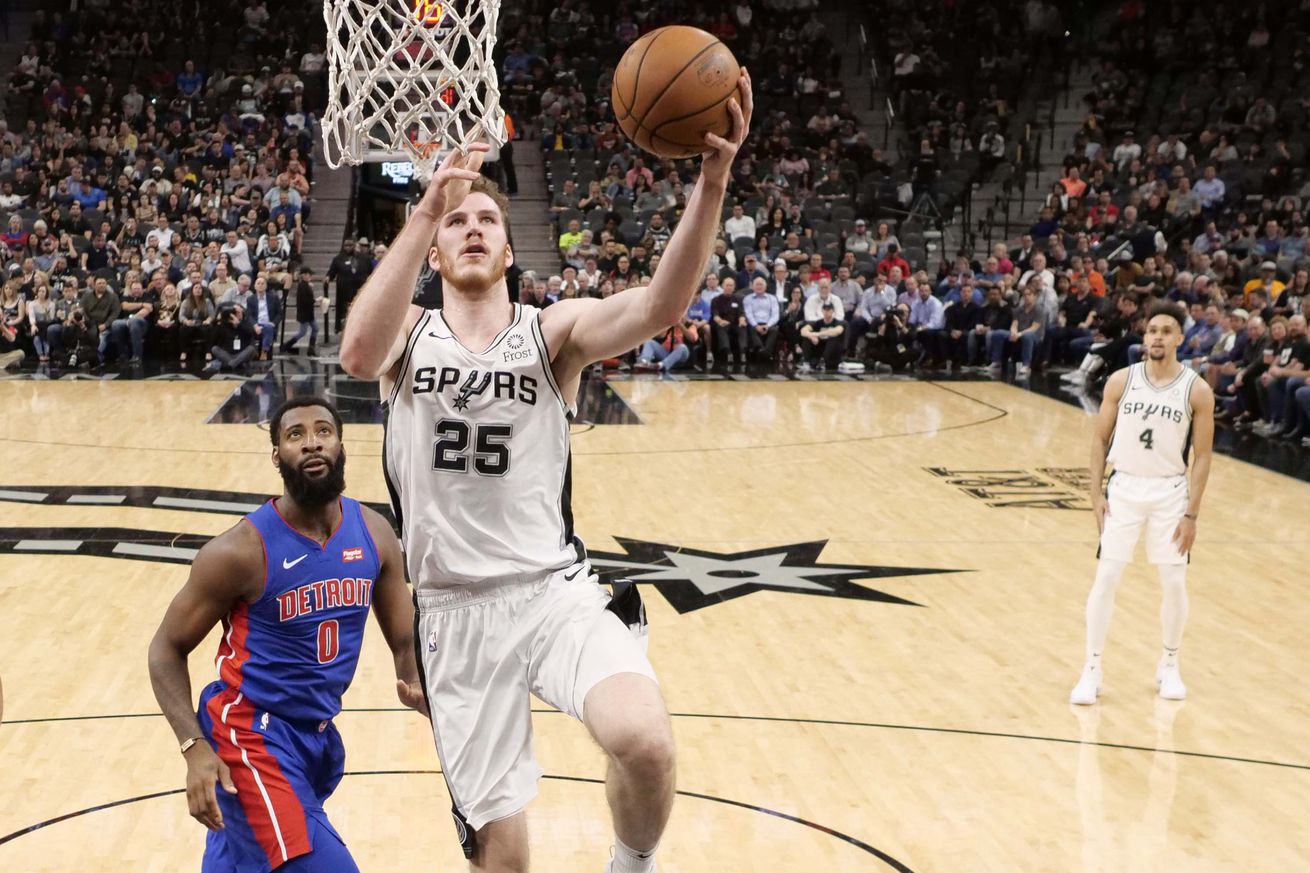 The latest in a long line of surprising San Antonio big men is making noise.

The Spurs have a habit of starting off the 4th quarter with a twist on a common action, typically exploiting the defense for easy points. Friday night’s payback game against the Knicks provided a good example.

Ahead by 13 with Rudy Gay leading a United Nations of Ball Movement lineup, the Spurs settled in to what looked like a typical post up for their 6’8” forward to go at Henry Ellenson.

Rudy sets a down screen for Davis Bertans, who receives the ball from Patty Mills at the top of the key before swinging it to Jakob Poeltl at the left elbow. Meanwhile, Rudy takes a cross screen from Marco Belinelli and establishes position on the left block. Jakob feeds him the ball and would typically clear out to the dunker spot on the weak side, while Patty, Marco and Davis move around the perimeter and look for opportunities to cut.

Instead of heading out to the wing, though, Marco runs back up to set a back screen for Jakob, who sprints for the rim. Rudy times the lob perfectly and Jakob dunks its home.

Alonzo Trier, who was guarding Marco, should have bumped Jakob on the way by, throwing the play off rhythm and giving Mitchell Robinson time to recover. But it’s easy to see the counter. After screening for Jakob, Marco pops to the three point line. If Trier bumps, Marco gets a three.

The play is simple, easy to execute and provides multiple high value scoring opportunities. The worst case scenario here is Rudy posting up against Ellenson. The best part is that it puts each of the 3 key players in position to score in a way they excel at: Rudy in isolation, Marco from three, and Jakob on a dive to the basket.

Neither Rudy or Marco were able to do much damage from those spots in this game, but Jakob was a handful, especially in the pick and roll. He was credited with 8 screen assists worth 18 points on the night, continuing a trend our very own Bruno Passos noted:

Since becoming a starter, Jakob Poeltl has averaged 12 points per game created off his screens, good for 6th in the NBA over that stretch. LaMarcus Aldridge isn’t too far behind at 11.4.https://t.co/6T2puH8quI

He sets excellent screens, but he also provides a lot of space for the ball-handler by finishing so well on the move. Per Cleaning the Glass, 78% of Jakob’s attempts come at the rim and he makes 70% of them. Given that he’s only shooting 55.3% from the free throw line, it may only be a matter of time before teams start making him earn those points at the line. We’re not there, yet, though, and Jakob showed his soft hands and deft touch around the rim several times.

If you’re keeping score at home, that’s a lefty layup through light contact, a left-handed dunk, and a double clutch two-handed lay in. The Austrian’s got moves.

For the season, Jakob’s averaging just one possession finished as the roll man in a pick and roll per game. That number is obviously trending up as Jakob spends more time in the starting lineup. His 1.28 points per possession as the roll man is currently 13th in the league among players averaging 1 per game or more, though his turnover rate is higher than all but 2 of the players above him.

He still has work to do, but the talent and skill are there. With more opportunities and more reps, games like this will soon be the norm.