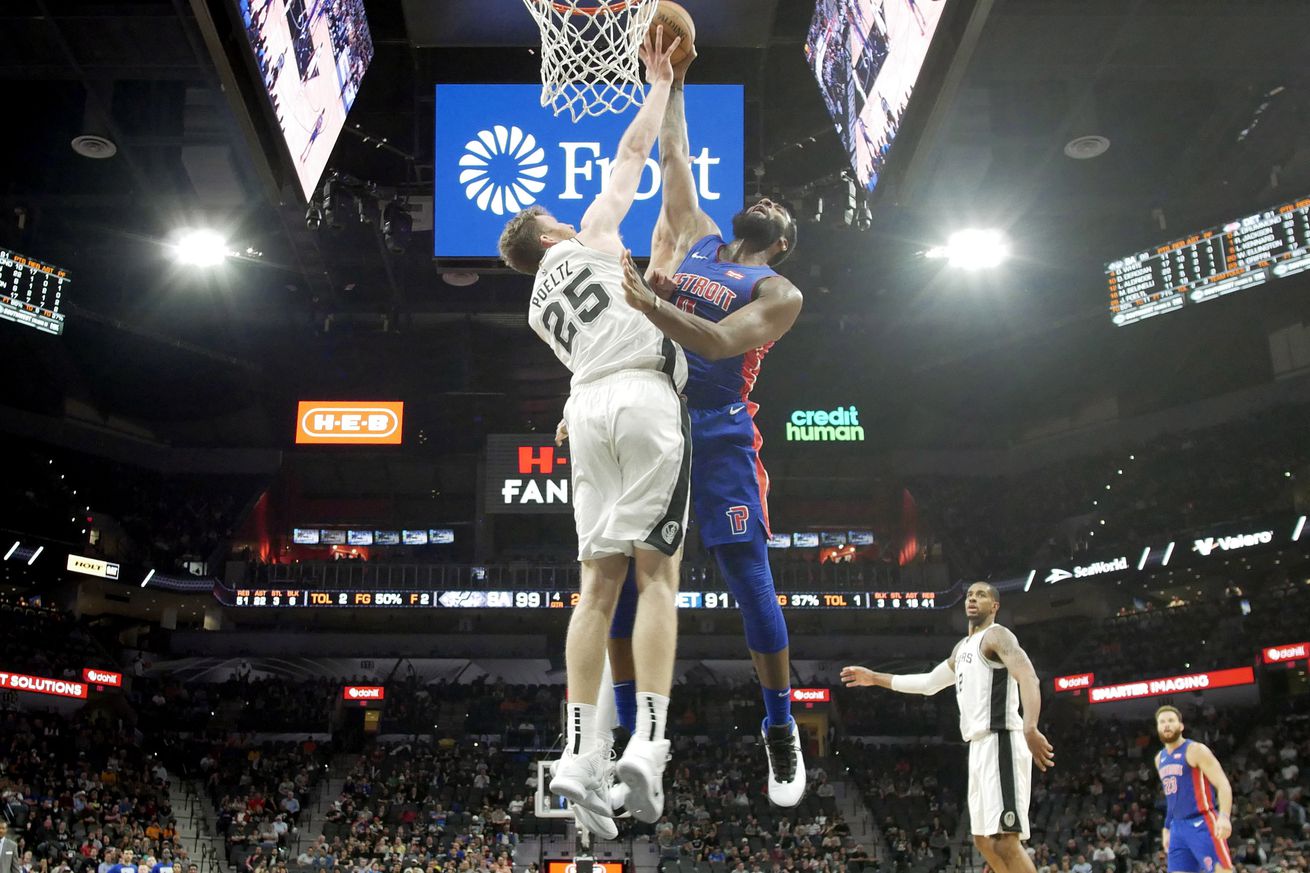 Poeltl started against Detroit and played exceptionally well — only it wasn’t actually an exception.

The Spurs’ young big man played the most minutes of his career against the Pistons on Wednesday night and responded by filling the stat sheet with 11 points, a career high 14 rebounds, and 3 blocks. Quite a stat line, but these numbers are far from an outlier — his production in those 34 minutes of action is right in line with his per-36 numbers for this season.

Despite struggling for most of the year when playing alongside another big, Jakob ended the night with a +4, just the 2nd time this season he’s had a positive +/- in a game he started. The other was the first game of the season against the Timberwolves in which he played less than 8 minutes. That includes the team’s first game against Detroit and games against other teams that play big in Utah and Memphis.

In their 128 minutes on the court together before this game, the team had a -18.9 net rating when Jakob played with LaMarcus Aldridge. After 25 solid minutes against the Pistons, that number jumped all the way up to -13.6, which is still terrible, but it’s a huge improvement.

That doesn’t mean the Spurs have solved the riddle of how to keep two bigs on the court against modern offenses. The Pistons have three rotation players that Jakob can credibly defend in Andre Drummond, Thon Maker, and the Tibilisian Torpefier, one of which at least was on the court the entire game. The Pistons don’t really have a guard or wing who can exploit a mismatch well enough to force a big like Jakob off the court either. Reggie Jackson just isn’t that scary.

Against teams that play two bigs, Jakob is San Antonio’s best answer on defense. He and LaMarcus haven’t been good together for most of the season, but that’s not where the problem has been. The team’s 111.4 defensive rating with the two on the floor is really, really bad, but it’s just a bit better than their overall defensive rating of 111.5.

The problem has been offense. The team has scored just 92.5 points per 100 possessions when they both play, the worst of any two-player lineup on the team that has played at least 100 minutes. And yet, against the Pistons, the 10th best defense in the league, they scored just fine. It’s a very small sample size, but there were some encouraging signs.

Jakob’s at his best setting picks, rolling and cutting to the rim. His 6.3 screen assists per 36 minutes is 8th in the league among players with more than 500 minutes, and he’s almost as good at finishing. So far this season, he’s taking 76% of his attempts at the rim, per Cleaning the Glass, and making 68% of them.

This is the best usage of Jakob, but it still serves to put baby in the corner. LaMarcus has enough range to space out farther than the dunker spot, which is important because the opponent’s best big man defender is often attached to him. That makes Jakob’s rolls far more difficult to defend. But it feels like a travesty to turn one of the best offensive big men in the game into a mediocre floor spacer.

But on Wednesday night, LaMarcus appeared more comfortable in the corner than he did earlier in the season. He’s only taken 1 three from there this year (he missed), despite having hit 18 of his 50 corner threes since arriving in San Antonio, but he attacked a close out much more deftly than he had previously, though the ball was deflected out of bounds.

It’s much worse when Jakob has to provide space. He doesn’t even pretend to be a threat from the midrange if he doesn’t have a full head of steam headed for the rim.

In the long term, it’s unlikely, even with Chip Engelland working miracles on a daily basis, that Jakob will suddenly develop an outside shot in his mid-20s. While he’ll continue to improve, he’s never going to provide space that way. The best the Spurs can reasonably expect is that he’ll get his free throw percentage, currently at just 54.4% this season, up to an acceptable level.

If that’s the case, it’s difficult to imagine Dejounte Murray, DeMar DeRozan, LaMarcus and Jakob sharing the court for significant minutes. Even with a shooter like Derrick White or Davis Bertans in the other spot, the floor would feel awfully small. Swapping Dejounte, DeMar or LaMarcus out for a another long-distance threat would help, but when removing one of your 3 best players makes the team better, you’ve got problems. Jakob has the potential to be a key part of the Spurs’ youth movement, alongside Dejounte, Derrick, Lonnie Walker IV, and Chimezie Metu, but his fit is far from certain.

In the short term, though, he may continue to be the team’s best option for a 5th starter, especially if Bryn Forbes is out for awhile. The Spurs started Pau Gasol beside LaMarcus in both games against the Thunder in early January. The Thunder have run out a starting frontcourt of Jerami Grant and Steven Adams on most nights, so the Spurs will probably choose to keep Jakob in the starting lineup for Saturday.

The Nuggets will visit San Antonio on Monday, and with Paul Millsap’s return, Jakob may get the nod in that matchup as well. After that, it will be interesting to see which direction the Spurs go. Atlanta won’t be as much of a concern, but the Spurs will almost certainly have to bring Rudy Gay back into the starting lineup for Sunday’s showdown with the Giannis-led Bucks.

Beyond that, it will be all about health and matchups. Jakob has already shown he deserves to stay on the court, but he needs to show that he can stay on the court with LaMarcus. He’s still very young, especially for a center, so what he shows over the last month and half of the season won’t be a finished product, but it should provide at least some indications of what the future holds for both the Spurs and their talented young big man.