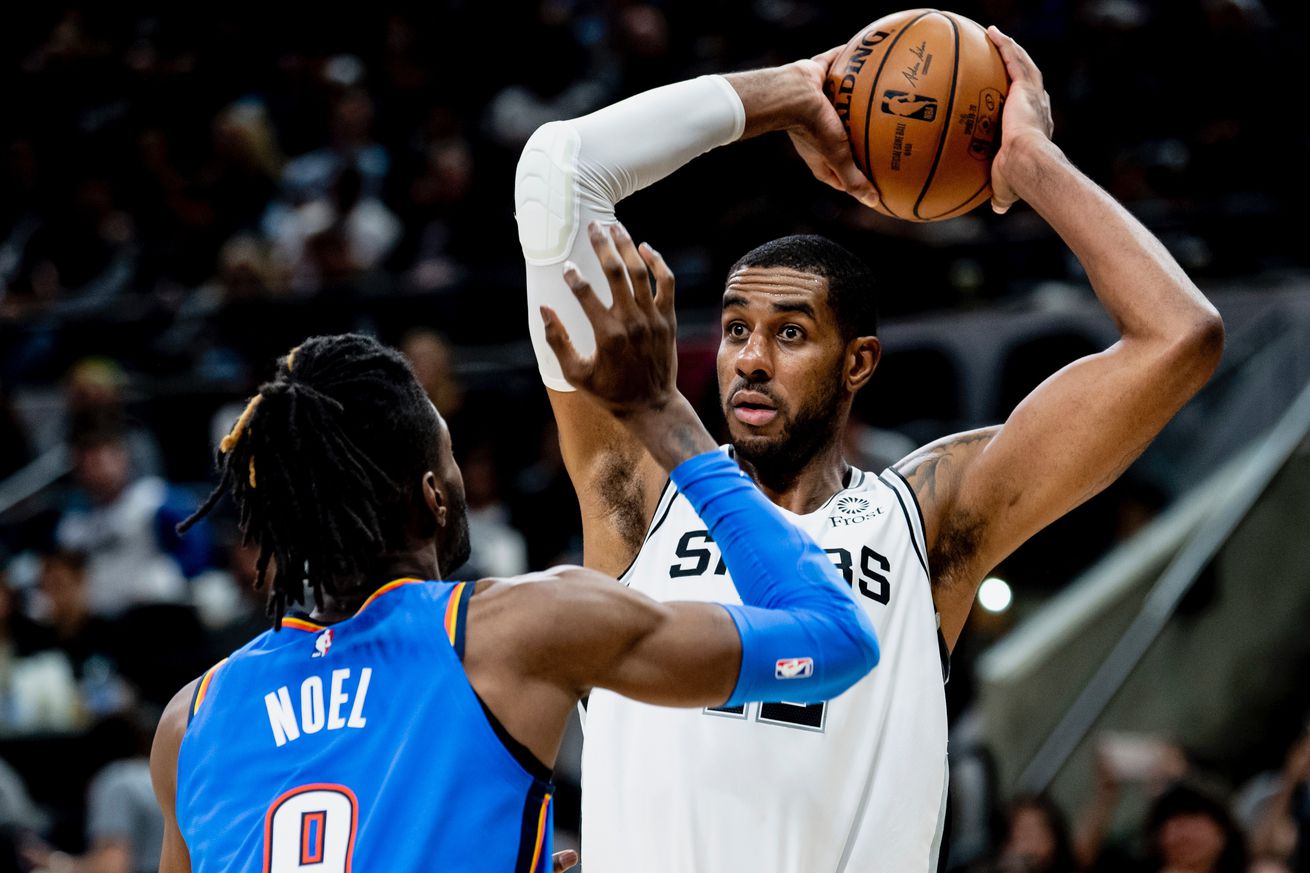 LaMarcus Aldridge was creating points even when he didn’t have the ball.

When LaMarcus Aldridge has it going like he did against the Thunder, there’s little any defense can do. He was incandescent from the floor, making 14 of his 17 shots from outside the restricted area and helping the team’s guards pile up a ton of easy assists. The Spurs’ 32 dimes on the night is their new season high.

LaMarcus registered 4 assists of his own, to go along with his 39 points, 6 rebounds, 2 steals and a block. The numbers alone show he was the unquestionable driving force behind the team’s sterling offensive output. But a pair of Trey Lyles threes from early in the 3rd quarter helped show LaMarcus’ impact in ways that don’t get tallied up in the box score.

The first came with the Spurs trailing by 4 just a minute into the 2nd half.

The Spurs run Motion Weak to get LaMarcus a post up in his preferred spot on the left block, but the Thunder pay all kinds of attention to the cross screen designed to help him establish deep position, putting multiple players in his way as he weaves through traffic in the paint.

With the majority of the Thunder defense sucked down into the lane trying to keep the ball away from LaMarcus, DeMar DeRozan pops out to the arc over a free throw line screen from Trey before driving back to his right.

Terrance Ferguson and Danilo Gallinari both find themselves a step behind the play as they work to recover from helping on LaMarcus. They don’t cut off DeMar’s penetration until he’s in the paint, giving him an easy spin and kick out to Trey Lyles at the top of the key. LaMarcus didn’t do anything but run across the lane here, but his effect on the Thunder defense helped create the open look that Trey knocked down.

Knowing what side of their bread had butter on it, the Spurs went right back to a play designed for LaMarcus their next time down the floor.

This play is called Milwaukee, which is a staggered screen for the ball handler at the top of the key followed by a backscreen for the lead big as he rolls to the rim for either an alleyoop or a post-up.

Steven Adams does a great job of reading the backscreen and prevents LaMarcus from using it, forcing the play to go straight to the post up. The Thunder take multiple shots at the Spurs big man as he crosses through the paint, ensuring he can’t take up residence too deep on the block. But as Adams closes in on LaMarcus on the left side, Dejounte Murray and his big man experience a moment of telepathy.

LaMarcus drops his shoulder into the Thunder center and prepares to screen Chris Paul, while Dejounte uses a quick lefty hesitation dribble to get baseline. The penetration causes rotation with Gallinari collapsing to prevent the layup, so Dejounte drops a nice bounce pass to Trey in the corner. Ferguson attempts to close out, but it isn’t enough to bother Trey who knocks down another open look.

Those two back-to-back triples turned a four-point deficit into a two-point lead, jump starting the Spurs slow burning second half surge that would eventually build up a double-digit lead. Even on a night when LaMarcus filled up the stat sheet, there was a lot more he did for the team that rarely gets recognized. When the big fella has it going, he’s an offense unto himself.