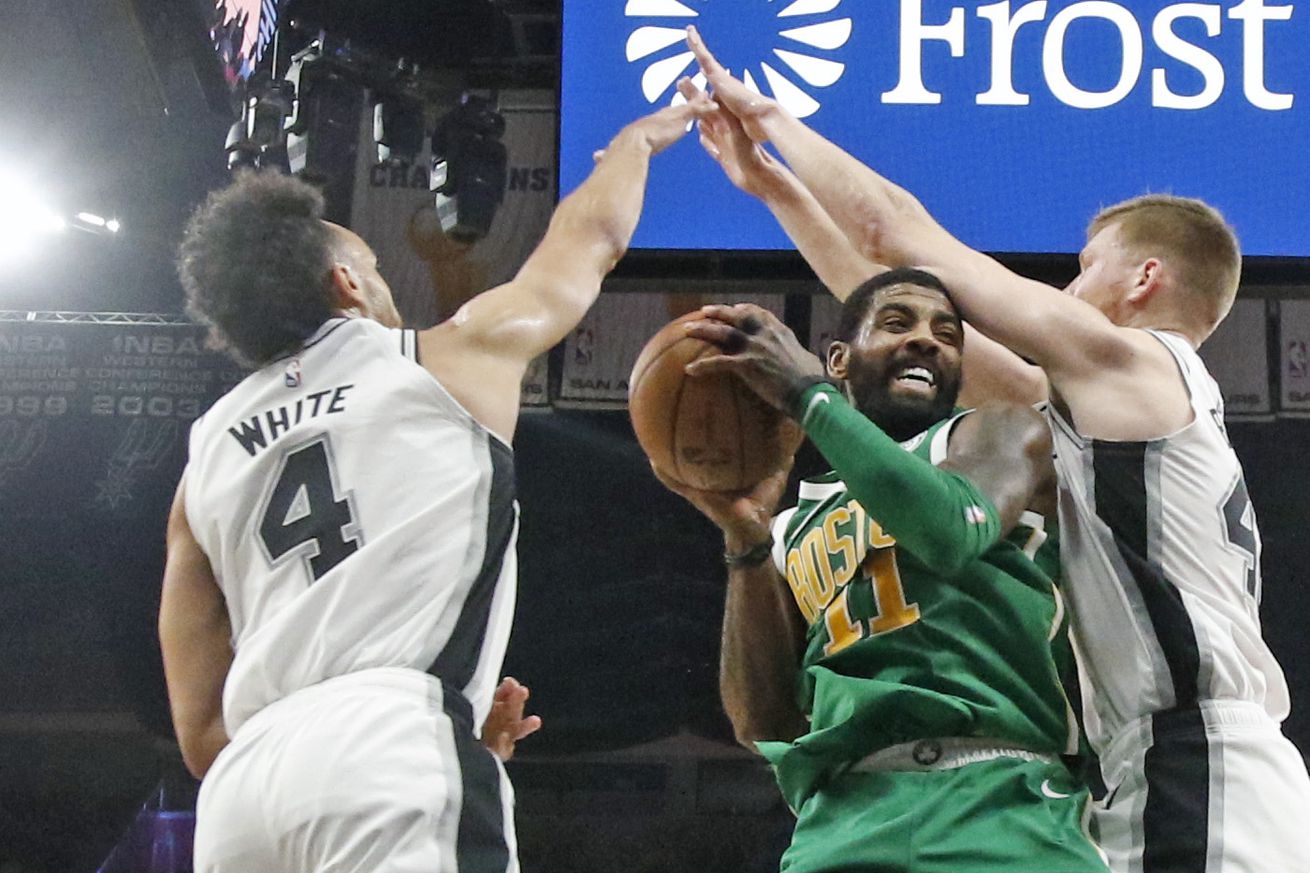 Impressive play, but can the Spurs maintain this pace?

What a month. The Spurs went 11-5 in December and embarked on a Revenge Tour that extended through the holiday season. And a great cap to 2018 to win their the SEGABABA (the first this season) before coming home and besting the Boston Celtics with the most impressive quarter of scoring during the Popovich Era.

The starting line-up has morphed into a new machine with Derrick White playing stellar offense and defensive over these last games. At this point, opposing teams don’t know what to make of him. How long that lasts will impact the remainder of the Spurs season.

Meanwhile, Davis Bertans is a known entity, and still teams have trouble keeping the Latvian Laser from taking over in spurts. How he is utilized in combination with the return of Pau Gasol also adds definition to any aspirations the Spurs have of going strong into the All-Star Break.

Pop has apparently settled on a new starting lineup, with Derrick White joining the other regular starters. Should they stick to that one from here on out?

Marilyn Dubinski: Unless it suddenly stops working, I don’t see why not. White has been amazing in recent games, spurring their big third quarters in the last two games and being the perimeter defender they need. In the last 12 games he has been a +11.4 for the Spurs when on the court. Plus/minus is about more than just one player, but over time it tells a story, and White has been good news for the Spurs.

Mark Barrington: Uh . . . yeah. Derrick is probably the best defender on the Spurs right now, except for maybe LaMarcus. And he’s developing an offensive game as we speak. He’s also the only pure point guard the team that’s healthy.

Bruno Passos: Barring any weird or difficult matchups on a given night, yep. Over the last 10 games, that fivesome has put up an 18.7 net rating, and it seems that White is getting more comfortable every night, which is huge for the Spurs’ long-term outlook. The big question with this is who Pop turns to when the team faces an elite small forward like, say, Kawhi Leonard, since Dante Cunningham had been his go-to guy when he needed a more imposing defender on the perimeter.

Jesus Gomez: Yes, at least for now. The Spurs have found something that works and should stick to it. The starting unit might be a little small for some matchups, but it should probably get a chance to prove itself in those situations before Pop goes back to inserting Dante Cunningham.

J.R. Wilco: Funny how the talk has gone from how the Spurs play too big, to how they might be too small. Right now, I feel pretty pragmatic about the starting unit: if it’s working, stick with it. I’d even prefer to see Pop leave White out there over Cunningham.

The Spurs had a couple of solid outings away from San Antonio recently, beating the Clippers on a SEGABABA and coming a few free throws short of getting a win in Denver. Should we expect them to start performing better on the road?

Dubinski: For sure. I don’t know if we should expect them to suddenly become the road warriors they were a couple of years ago, but we should reasonably expect them to start beating the teams they should beat along with getting some steals on the road, perhaps posting a plus-.500 record from here on out.

Barrington: I expect them to be consistently inconsistent. They’ll have some good games, and some awful ones. It takes time for players to gel in Pop’s system, and they really won’t get it done this season, but they’ll be much better next season because of all of the playing time they’re getting this year.

Passos: Better than they were at the start of the year? Sure. The bar should be higher, and that stretch in mid-November was always going to be one of the tougher parts of the schedule. It’s still safe to expect a healthy number of stinkers, but defense travels, and this is a better defensive team than six weeks ago.

Gomez: I think so. Pop has found lineups that work and the team seems to have realized that it can’t coast for quarters at a time on the road. I was really encouraged by the focus they showed in the third period of those games. They have struggled greatly with coming out of the break strong but had no trouble doing it in Denver and LA. I’m not saying they are going to win a ton of road games, but I expect them to compete better.

Wilco: Good teams win at home. Playoff teams win on the road. If the Spurs win half of their roadies from here in, they’ll make the playoffs. That’s about as much as I expect from them, and far more than I hoped for a month into the season.

Here’s an interesting stat. There are only eight NBA players performing better than Davis Bertans in all three of these key impact metrics this season: PIPM, RPM and POE.

Don’t sleep on the Latvian Laser.

Look at the tweet above — are you surprised by those stats? And with numbers like these, what is keeping Bertans from playing more minutes or even starting?

Dubinski: It’s hard to explain those numbers beyond he’s just been very impactful while on the court. As for why he isn’t starting, I’d refer back to the first question. It’s not because he doesn’t deserve to start, but the current starting group doesn’t need breaking up. He’s also playing a role as spark plug off the bench, plus he’s better as spread-power forward than small forward, and Rudy Gay is doing just fine in that starting role.

Barrington: I honestly think that this metric is so contrived that it’s essentially meaningless. Bertans is a really good backup, but he doesn’t really belong in that group. Having said that, he’s constantly improving, and I hope he continues to get more minutes.

Passos: I couldn’t begin to tell you what feeds into those three metrics, but I think Bertans’ inclusion among those other names shows how those numbers can be limiting for judging players in a vacuum. Don’t get me wrong — Bertans is a killer shooter and has done a great job rounding out his game, but I think his improved production and appearance in some of these catch-all stats also has much to do with the Spurs figuring out what lineups he works best in. I’m not sure a bigger role is what he needs right now.

Gomez: I’m not surprised Bertans is doing well on plus/minus stats since even simple net rating would tell you the Spurs are great when he’s on the court. Those stats also include box score priors, which probably really help him on offense without hurting him too much on defense. I would have loved for Davis to be Pop’s first choice as a starter earlier in the year. I think it would have helped them find good lineups earlier. Alas, that didn’t happen and now the Spurs have their core units. As long as Bertans plays at least 20-25 minutes a game, I’m cool with him coming off the bench.

Wilco: I couldn’t agree with the closing of that tweet more. Regardless of the country of origin, lasers are uncomfortable and should never be used as a bed.

Dubinski: So far Pop hasn’t been in a rush to put Gasol in largely thanks to Poeltl’s play, but I’m sure he’ll inevitably get a chance when Poeltl has an off night or other circumstances arise (like Gay’s wrist). Also Pop has been going with nine-man line-ups lately, so it’s possible he expands to ten and does some experimenting with both big men at once.

Barrington: I don’t really know. I expect him to only play limited minutes going forward, but you can’t always predict what Pop is going to do with players. I think Pau still has a lot of value, but only in certain matchups.

Passos: This is one of the bigger questions moving forward, and my guess will be not much, at least for the time being. It was always going to be difficult for these three to fit into the same rotation as this team shifts to playing primarily small ball. Poeltl was the odd man out early on, but he’s playing so well right now that it’s hard to justify shaking things up just to get Gasol on the floor.

Gomez: It’s a tricky situation. In terms of play and two-way impact on the team, Poeltl should be the backup center going forward, with Pau only playing garbage time or when someone is in foul trouble. If Pau is cool with that, the team will be better for having him around. But it’s not that easy to convince a future Hall-of-Famer to accept that role. If he doesn’t, ideally he would be traded, but his large contract and his $6 million guaranteed for next season might make that tough. The whole situation has the potential of becoming a minor distraction going forward. Hopefully PATFO will figure out the best course of action.

Wilco: If all goes well, then his availability affects no one at all, and he can continue to be available and unplayed.

What should be at the top of the Spurs New Year’s resolution list heading into 2019?

Dubinski: Be consistent, and have fun. At least for this season they aren’t under the pressure they’re used to to produce a championship, so just keeping working to get the most out of this group (which may be more than we initially thought) while preparing for the future.

Gomez: Play with energy for all 48 minutes. That’s not easy to do, but the Spurs go nine or 10 deep and have some veterans who should know better than to assume this team can out-talent opponents. Please, no taking third quarters off from now on.

Wilco: Keep on pounding the rock

Join in the round table by answering this week’s questions in the comments section below.