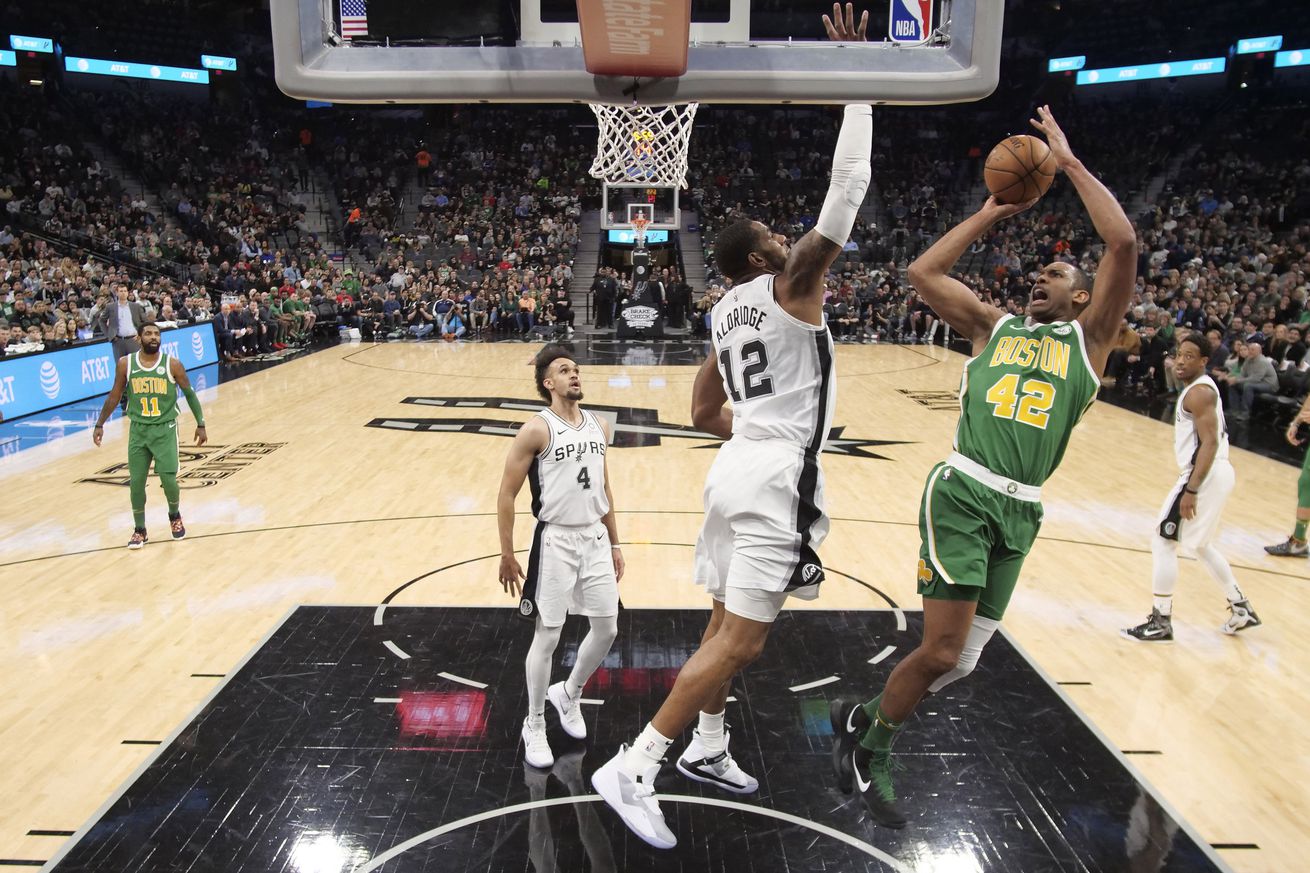 For the third game in a row, the Spurs used defense to kick-start an offensively dominant third quarter.

In what is quickly becoming a new trademark, the Spurs’ dominated the 3rd quarter against the Celtics on Monday night. Over the last 3 games, they’ve outscored their opponents 113-66 in that frame. While much of that was built on generating turnovers and easy opportunities in transition, the Spurs used a different tactic against the Celtics. They just didn’t miss.

The Spurs shot 19 of 25 in the quarter, including 5 of 5 from three, and made all 3 of their free throws for 46 points on a true shooting % of 87.4. They haven’t scored that many points in a quarter in a long time.

With that kind of shooting, the Spurs were going to win this 3rd quarter no matter what kind of defense they played, which is good because they weren’t much better on that end of the floor than the first half. In fact, the Celtics also had their highest scoring quarter in the 3rd, putting up 30 points.

But the Spurs did generate stops, and scored incredibly efficiently when they did. Despite giving up a 30 point quarter, they held the Celtics scoreless for 6 consecutive possessions over a nearly 3 minute span mid-way through the quarter. Derrick White kicked off the run with an outstanding block on a Kyrie Irving turnaround jumper out of the post.

This is great individual defense by Derrick. The most important part is that he stays down until Irving commits to the shot. Learning to be the 2nd jumper is hard, and young players frequently struggle with the urge to crush their opponents’ shot. But Derrick stays down, then uses his length and jumping ability to his advantage without putting himself in a position to give away a cheap shooting foul.

For Irving’s part, the rest of his team isn’t doing him any favors on this play. Take a look at the spacing as he goes to work on Derrick.

There’s almost no movement and no place to go. All five Spurs are either in the paint or just a step away, which is exactly where they should be given how the Celtics are aligned.

On their next possession, Irving pulled up for three at the top of the key.

He missed, but this isn’t a bad shot. He’s shooting 38.8% on pull-up threes for the season.

The Spurs’ best defensive possession as a team in this stretch came next.

This is good, but the Celtics passed up a few better looks to settle for that contested step-back three. Gordon Hayward could’ve taken that jumper from the elbow, or better yet, hit Irving cutting under the rim, and Jayson Tatum should have driven to the basket instead of taking that giant side-step into his shot. This is what the floor looked like after he took a dribble but before his gather.

The Spurs’ help defense is ready, and there’s only 5 second left on the shot clock, but Tatum is an exceptional scorer and it’s hard to believe that the rim protection of Bryn Forbes and Davis Bertans is such an effective deterrent.

The Celtics got Hayward the ball on the move on their next two possessions as well. On the first, Hayward pulled the trigger on that elbow jumper.

He gets an open look again, but misses. Most importantly, with LaMarcus Aldridge preventing penetration, Davis keeps Daniel Theis off the glass and grabs the rebound.

On the second, Hayward faked the jumper and kicked the ball out to Jaylen Brown on the left wing.

Brown’s shooting 27.6% on catch and shoot threes so far this season, so this is a great outcome for the Spurs. Davis, again, boxes out Theis and tips the rebound to LaMarcus.

The Celtics went back to Irving on the next possession, running a pick and roll with him and Theis.

LaMarcus drops deep to protect the rim, and rather than attack, or try to draw in Davis to open up Brown in the corner, Irving hits Theis on the roll. Theis misses the pull up jumper, and Davis grabs his 3rd defensive rebound in less than a minute.

The silver and black scored on all 7 of their possessions over this period to turn a 2 point deficit into a 14 point lead. 6 of those buckets were in the paint, with two and-ones. LaMarcus made the team’s lone mid-range attempt in that time, an open look from the left baseline. You can watch the entire run here.

The Spurs have the best offense in the league following an opponent’s missed field goal, scoring 123.18 points per 100 possessions. Even when their defense isn’t spectacular, they’re solid, as they were for most of this run, and that’s more than enough for this team. Preventing easy looks and making their opponents work for every point is bound to generate misses, and it only takes a few stops to start the avalanche on the other end.