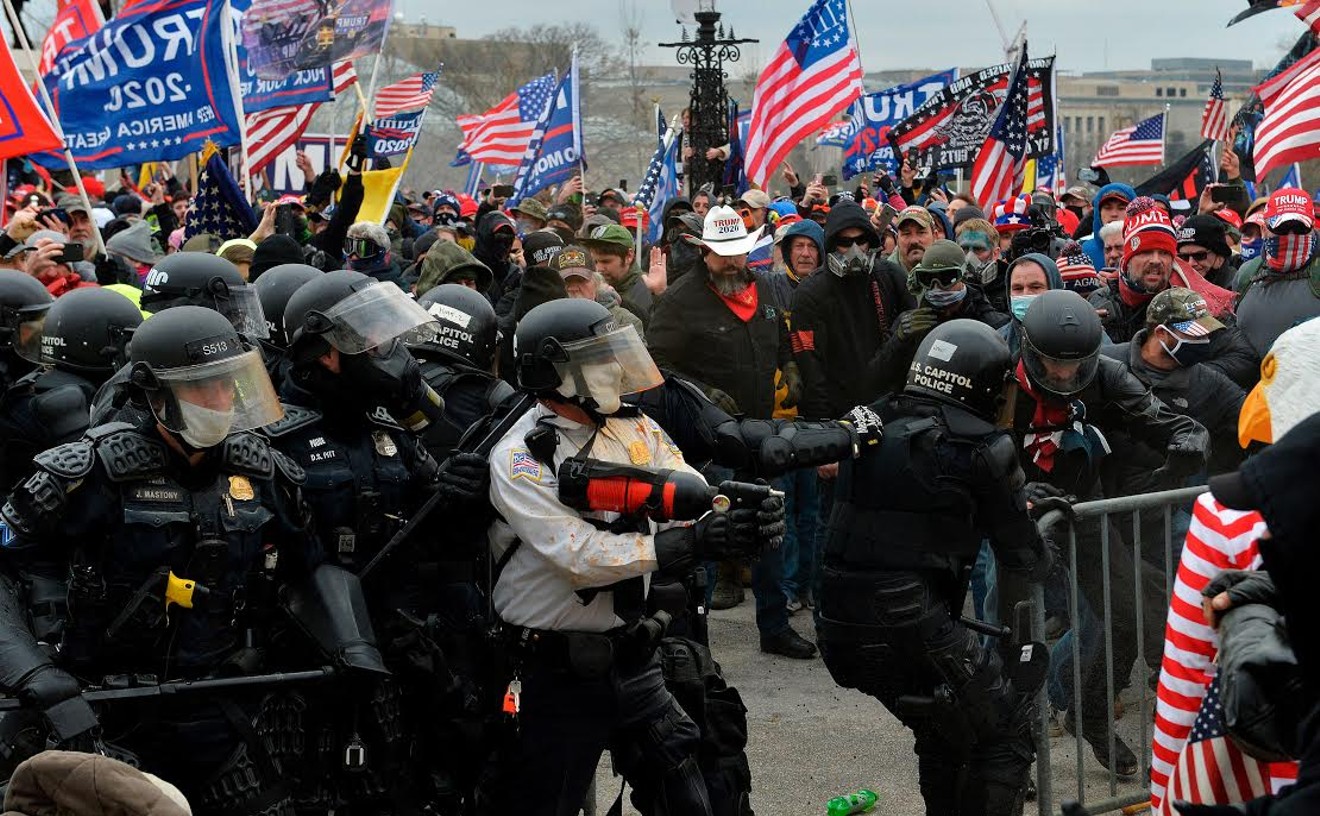 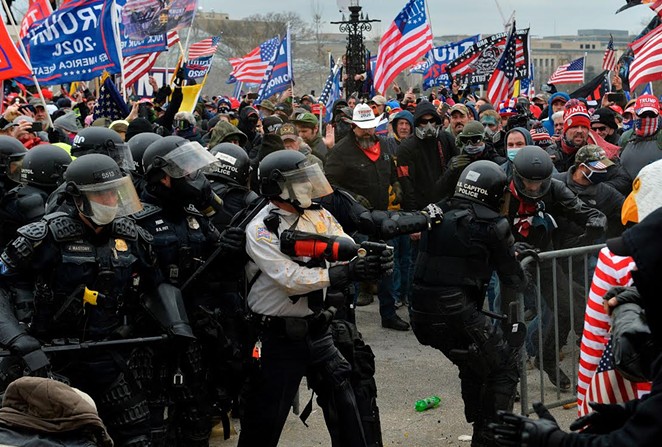 The attack on the Capitol last week by racist and fascist organizations of the hard right — with QAnon and election conspiracy boosters in tow — was an assault on democracy itself to be sure. The role of President Donald Trump and his many Republican allies in Congress, notably Sens. Ted Cruz and Josh Hawley, in fomenting that attack was quite clear. Laws already on the books were broken by all and sundry. The perpetrators at all levels must, therefore, be brought to justice by the courts and Congressional Democrats. Plus any Congressional Republicans willing to work with them after a crisis their colleagues manufactured nearly led to a political disaster.

That said, I agree with all those who say this tragic chapter in American history was predictable and predicted and that literally everyone who follows national political developments was aware that hard-right Trump supporters were planning mayhem at the Capitol during the certification of the state Electoral College votes for President-Elect Joe Biden well in advance. That they were supported by Trump loyalists in government and Trump himself. That they were coming in numbers. And that they were heavily armed and planning violence.

As such, it makes absolutely no sense that the dangerous racists and fascists the president unleashed down Pennsylvania Avenue from a rally where he incited them to action with one of his more deranged speeches were able to get anywhere near the Capitol. It has already been widely acknowledged in the largest American media outlets that if the protestors had been Black or left wing—and had been crazy enough to attempt to storm the Capitol with weapons—dozens or even hundreds would have been killed or wounded by a vastly larger security presence than was on the scene last Wednesday.

Here I can speak from long experience. Regular readers will recall that I spent decades as an activist for democracy and social justice who helped organize hundreds of protests large and small. Whenever people like me call marches, rallies, and sit-ins around the US — particularly in Washington, DC — we are universally met with overwhelming force by police (and an alphabet soup of state and federal security agencies at more significant actions). From the smallest picket line to the largest march. Despite the fact that we are virtually always unarmed and explicitly nonviolent. Most of us because we are against political violence — as I am — some of us because we know we’ll always get crushed by the powerful praetorians serving the government and large corporations should we try to win the day with armed rebellion.

To that point, If we ever tried to do anything even remotely like what the racists and fascists of last week’s assault did, we would have faced off against the full weight of the national security state. Anyone identified as our leaders would have been interdicted and arrested in our home cities even before we left for any Capitol attack. Made especially easy by the huge amounts the government and corporations spend on infiltrating left opposition organizations no matter how peaceful. Those of us who made it to DC would have been confronted by thousands of heavily armed and armored police, agents, guardspeople, and perhaps even soldiers with an array of mass anti-personnel weapons — Long Range Acoustic Devices (LRADs), flash bang grenades, (so-called) rubber bullets, and a variety of dangerous gases, capable of incapacitating thousands of people at time. Check points would have been set up throughout the city to search protestors for arms and immediately arrest anyone who violated DC and federal firearms and explosives laws. Any of us seen with metal flag poles or any other implements that could be used as weapons (or scaling ladders or body armor) would have had them confiscated.

All of us would have been kept far away from any halls of power we should care to approach by massed security detachments from several agencies. Any of us that attempted to break police lines and charge toward the Capitol would have been stopped with the anti-personnel weapons mentioned above and brute physical force — especially if our ranks were predominantly Black and Latino/a — which would also be used indiscriminately on innocent bystanders. And any of us that managed to get to the gates of the Capitol would very likely be shot down with live ammo if they attempted to break through the outer gates and charge the building. Thousands of wounded and terrified protestors would have been “kettled” (surrounded) by security forces (whether we moved toward the Capitol or not), arrested en masse, and herded into city jails and makeshift holding pens for arraignment. Many of us would be denied water, food, medical treatment, and legal representation for most of our hours and even days in jail. Toilets, where present, would be allowed to overflow. Some of us would be beaten repeatedly and worse until our release… or denied bail and held until our eventual trials — which would absolutely not go well for us. Many would end up in federal prison for years after such a debacle.

And lest you think I’m exaggerating, everything I’m describing here has happened to left-wing protestors repeatedly in recent years — other than the massacres with live ammo that were the hallmark of US internal political repression in eras past. Though US external repression remains extremely violent and deadly to this day, sadly.

What actually happened to the hard-right attackers at the Capitol was the polar opposite of what usually happens to the political left at peaceful demonstrations. Federal and DC security forces were basically allowed to stand down. Leaving only a partially mobilized Capitol Police and scattered groups of other security personnel to defend the American seat of government and all the legislators within. They were unable to control the outer or inner perimeters of the site and hundreds of hard right demonstrators managed to gain entry to the Capitol — many with firearms and zip tie handcuffs. And proceeded to wreak havoc and terrorize Congresspeople and their staffers for hours. Wounding many of the building defenders, getting one of their own number killed, losing three more to health emergencies, and beating one Capitol Police officer to death.

So it’s eminently clear that the racist and fascist organizers responsible for the attack have friends in Congress and a variety of federal and DC security agencies. It wasn’t exactly easy for them to do what they did — even with the weeks and months of planning that evidently went into the effort — but it wasn’t hard either. It’s literally a miracle that no Congresspeople were hurt or killed. Nor was Vice President Mike Pence, a person of special interest to the hard right that day.

Now the concern must be that the hard right will basically get away with the Capitol attack. That President Trump and his enablers in the House and the Senate — of whom there are over 100 — will emerge unscathed from the conflagration. That only a few ringleaders from the hundreds of racist, fascist, and conspiratorial attackers that entered the Capitol will be sent to jail for their crimes. And that those leaders will become heroes to an emboldened hard right movement in the US. The tracts they will doubtless produce while incarcerated will become the Mein Kampfs of a new generation of racists and fascists. Who will seek to mount new, better attacks on the halls of power until they do serious damage to democracy and maybe, just maybe, plunge the nation into the second Civil War they so desire.

Those of us who defend democracy and seek nothing less than full human rights for all Americans and immigrants to its shores are then left with the same quandary we had before the Capitol attack: How do we prevent the rise of a larger and more successful hard right? How do we shrink its ranks and isolate its leaders until they are forced, as the vernacular saying has it, “back into their caves”?

Well, the first thing to ensure — as famed left intellectual Noam Chomsky said in a recent interview — is that we don’t demobilize the way the broad left did when Barack Obama became president. We need to keep growing the grassroots movements that (barely) allowed a Democratic Party victory in the 2020 elections and accelerate the drive to focus those movements on the suburbs and rural areas to organize to reverse their descent into racist and fascist strongholds. We need to spread the best and most decent ideas of those movements to the population at large (not just already left-leaning urban areas), debate the hard right wingers wherever they show their faces, and throw facts at the conspiracy mongers until they stop spreading lies based on fantasies.

Second, we need to put pressure on the Biden administration and Democratic leaders to stop working primarily in the interests of the rich and start delivering jobs, education, real national healthcare, real police reform, real paths to citizenship for immigrants, and an end to the coronavirus pandemic. While scrapping all our nuclear weapons and doing everything possible to end the environmental catastrophe caused by burning fossil fuels for generations. We need to push the Democrats left and continue trying to organize a left “third party” that can amplify that push even if it never achieves major party status. All in the service of social, political, and economic justice for all and removing the economic grievances that lead many fence-sitters to join the hard right in the seeming absence of alternatives to a government run by and for corporate elites. We need to pull those folks leftward.

Third, we need to figure out how to reform major corporate news outlets and social media platforms; so they help stop dangerous demagogues from rising to power while defending and expanding free speech and a free press. A massive topic for future discussion and debate without question.

If popular movements do all that hard work (and much more) at speed then maybe, just maybe, we can prevent the rise of a larger and more violent racist and fascist hard right by 2022 and certainly 2024, save our democracy — however flawed — and build a better America in the decades to come. So do it we must.

This piece was first published by Dig Boston.