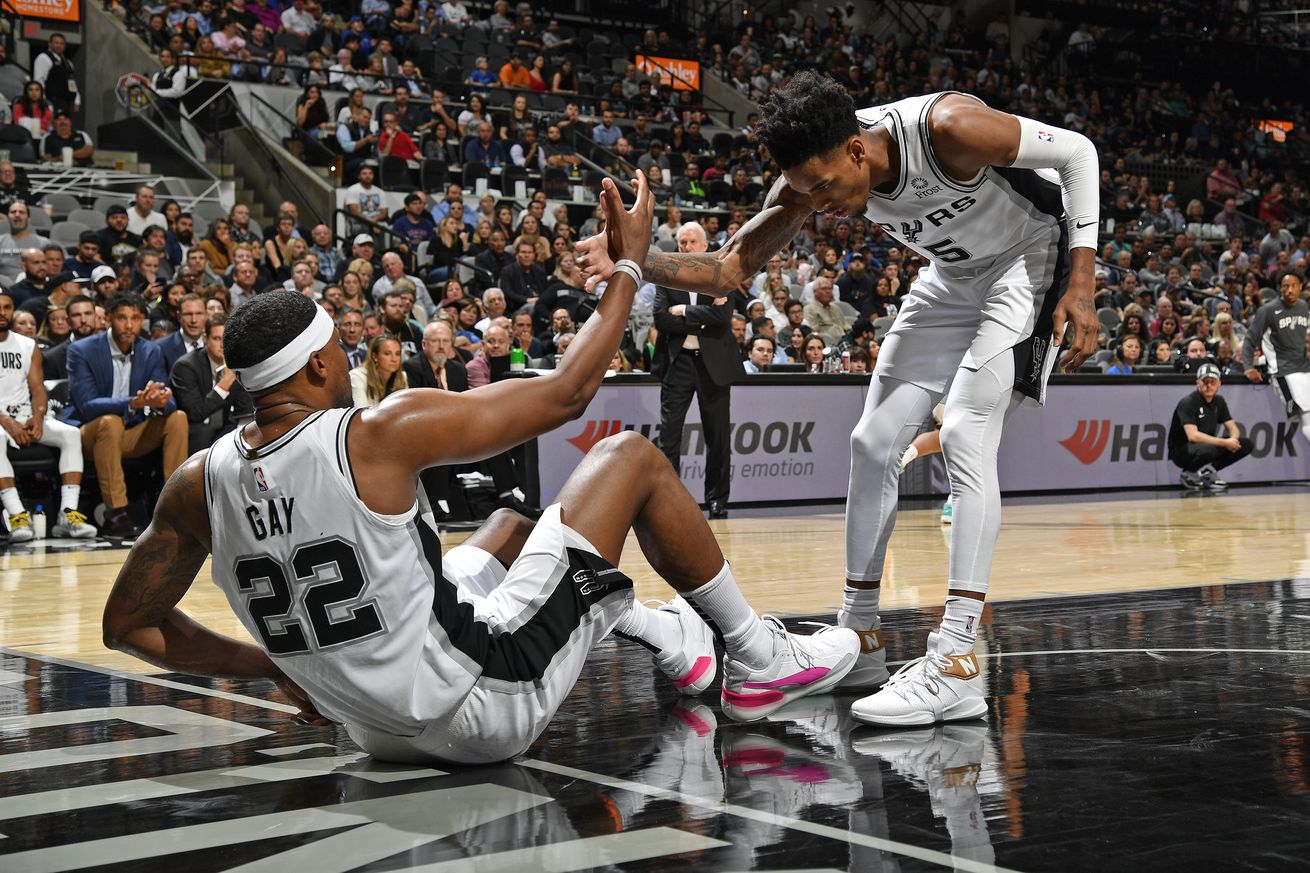 And how they can improve, even on the stuff they did well/

For much of Wednesday night’s season-opening home win over the Knicks, the Spurs lacked their characteristic focus and discipline. Turning the ball over 21 times, including 16 of the live-ball variety, in three quarters is never a good recipe for success. But somehow, they made it work, overcoming the 32 points the Knicks scored off those turnovers (more than any Spurs’ opponent all last season) to win in relatively comfortable fashion.

For the most part, the victory was built on fast break scoring (30 points, more than in any game last season) and at the free throw line (another 29 points). The team’s halfcourt offense was largely ineffective, managing just .79 points per play, per Cleaning the Glass, thanks to all the opportunities lost to bad passes (10) and lost balls (8).

Still, the Spurs squeezed in some good looking plays in the halfcourt when they were able to hang onto the ball. A good example is the weak side wing denial option out of Motion Strong, which they ran multiple times with different outcomes each time.

The initial strong side action on all three is a back screen for the original ball handler, but from there, each diverges into slightly different sequences.

All three appear to be pre-planned in that the weak side wings are open or do little to get open on each, instead transitioning immediately into the next movement as soon as Jakob Poeltl pivots in their direction.

On the first, that’s a down screen for Marco Belinelli coming out of the weak side corner to take a hand-off from Jakob up top. The intent on this play appears to be getting Kevin Knox on the ball handler in the pick and roll with a shooter alone on the side of the roller. Here, that’s Patty Mills, meaning Wayne Ellington has no business helping on Jakob the way he does.

Marco’s pocket pass is right on target and Jakob makes a pretty nimble play for a 7-footer, coming to a jump stop, then using a dribble and two steps to lay a soft, underhanded floater up on the glass. But he probably would’ve been better off kicking it to Patty in the corner.

On the second and third, that next action is to cut through the paint under a screen on the right block before catching on the strong side wing.

In both cases, that catch triggers a UCLA cut from the big up top over a screen from Dejounte Murray, who then pops to the top of the key with Jakob laying in wait.

The second time they used this play, Dejounte got the ball and ran a pick and roll with Jakob, resulting in a pocket pass and another example of Jakob’s soft touch.

The third time, Bryn Forbes hit LaMarcus Aldridge in the post, who nailed a 20 footer over Bobby Portis.

Even on these three plays, which each resulted in a bucket, the Spurs’ unusually poor decision making and timing showed through. As mentioned, Jakob missed a wide open Patty in the corner on the first. While it’s possible this was the team calling Jakob’s number, the only thing better than Patty with a wide open look from the corner is free throws or a dunk.

You can see Dejounte is not happy that Patty’s a half beat late on his cut the 2nd time they ran the play (though that’s most likely because Jakob took too long to pivot). And, as Dejounte transitions into the pick and roll with Jakob later in that same play, there’s no good reason for Trey Lyles to clear out to the right side of the floor. All that does is allow Marcus Morris to park on the edge of the paint, forcing Jakob to stop short of the rim.

Worst of all, the final time they ran the play, LaMarcus chooses to go one-on-one 20 feet from the basket with his defender in good position instead of giving it right back to Bryn, who had multiple better options. Bryn could have taken the three, drove into the gap created by RJ Barrett’s unnecessarily aggressive attempt to steal the entry pass, or swung it to Dejounte, who was already fading over a screen from Jakob and could have taken his own open three or attacked Julius Randle in the paint.

Any of those options is better than a contested 20 footer. LaMarcus hit it, which is part of what makes him such an incredible basketball player, but that’s certainly not the best shot for the team, even with less than 10 seconds on the shot clock.

The good news, if there is any, is that the Spurs would not have won this game last year. They were 0-4 in games where their opponents scored 25 or more points off turnovers for obvious reasons. It’s very difficult to score efficiently enough in the remaining possessions to overcome so many easy buckets for your opponent. But with Dejounte back on the floor, even playing just 24 minutes, the Spurs now have the ability to hold their own in the open court.

In this contest, against a game but still over-matched Knicks’ squad, that was enough to get over the hump. But that won’t be the case on most nights. If the Spurs’ don’t clean up their act soon, even Dejounte won’t be able to save them.