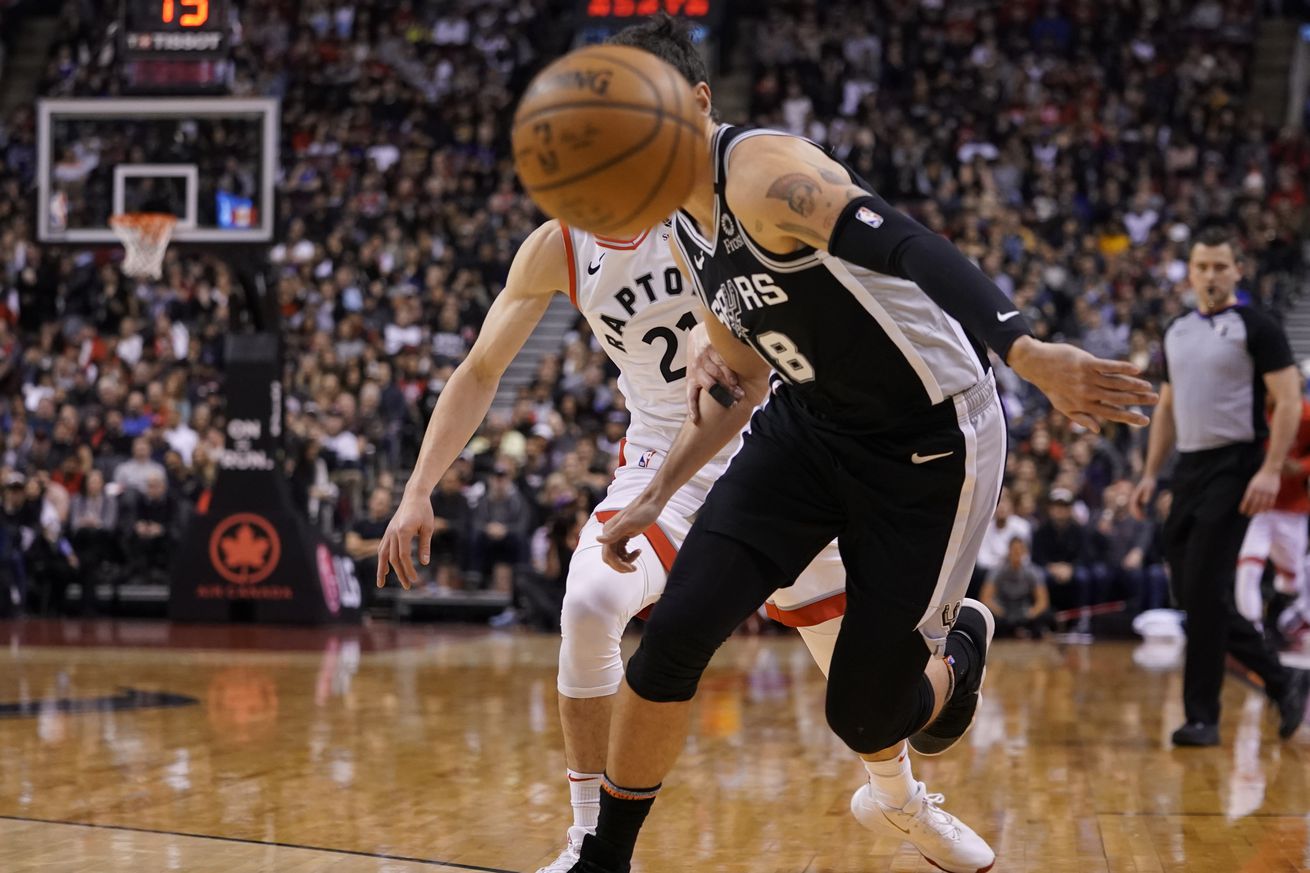 The Spurs stopped the Raptors in the tracks with a zone defense in the fourth quarter, allowing them to rally.

The Spurs’ defense wasn’t their biggest problem through three quarters of their Monday night comeback victory over the Raptors, but it was the solution. After 36 minutes of play, the Raptors had scored 82 points on 74 possessions, which works out to 110.8 points per 100, a number that is actually better than the Spurs’ season average of 111.9. Considering that they were on the road and that 2 of those points came on a pair of the cheapest technicals ever earned, that’s not a bad performance at all.

But even at that point, the team’s modicum of success had come in the form of an active zone defense that flummoxed the Raptors’ shooters. The Spurs used what appears to be a 2-1-2 (or maybe a 2-3 with a very active middle man on the back line) on 6 possessions over the first 3 quarters, and didn’t give up a single point on those plays.

If that offense looks familiar, it’s because the Spurs seem to run the same stagnant, pass-it-around-the perimeter-and-hope set the first few times they see a zone defense each game, too. But there was more to the the success of the Spurs’ zone in this contest than just the element of surprise and discomfort that always seems to accompany that particular defense in the NBA.

The guards were more active high on the floor, meeting the ball handler well above the three point line. The man in the middle, whether it was Jakob Poeltl, Trey Lyles or LaMarcus Aldridge, constantly communicated the movements of the offense and necessary adjustments. They even seamlessly switched between positions in the zone, covering for one another in a way that has been largely absent for much of the year.

Previous iterations of the Spurs’ zone defense this year have found stretches of success, but usually by relying on the elite athleticism and preternatural instincts of their defensively minded guards (remember Lonnie Walker IV blocking a corner three into the 10th row against the Cavaliers?). But this was different, with the Spurs’ defenders moving in concert around the floor, both mirroring and countering every thrust of the offense.

After using the zone at the end of the 3rd quarter to help shrink the deficit to 13 points, the Spurs opened the 4th in man-to-man and immediately gave up a corner three. Patrick McCaw bricked the wide open look, but after Rudy Gay hit Marco Belinelli for a cutting layup, the Spurs went back to their zone.

Over the next 9 minutes, the team used the zone 13 times, holding the Raptors to just 11 points on those possessions and fueling a vicious 17-0 run in one stretch. Defensive stops fueled the offense, allowing the team to get into transition, to operate against a defense that wasn’t set, and to find and exploit mismatches.

It was so effective that the Spurs switched to man defense after timeouts twice in the quarter — a tactic that usually works in the opposite direction — and forced the Raptors to adjust on the fly in both cases.

The team’s run of zone defense ended the way most zone defenses end, on a made three. After Kyle Lowry knocked one down from the top of the key with 2:21 to go, the Spurs stayed in man defense the rest of the way, though that likely had more to do with being unable to score on the other end that it did with the zone getting busted.

In the end, the Spurs held the Raptors to 11 points on 19 possessions against the zone. The home team shot 4/17 on those possessions, including 0/8 on wing threes, the shot this type of zone will often produce. It’s unlikely the Spurs will be able to replicate that level of success on a nightly basis, but an effective zone defense can completely change the rhythm and flow of the game, as it did in Toronto on Sunday evening.