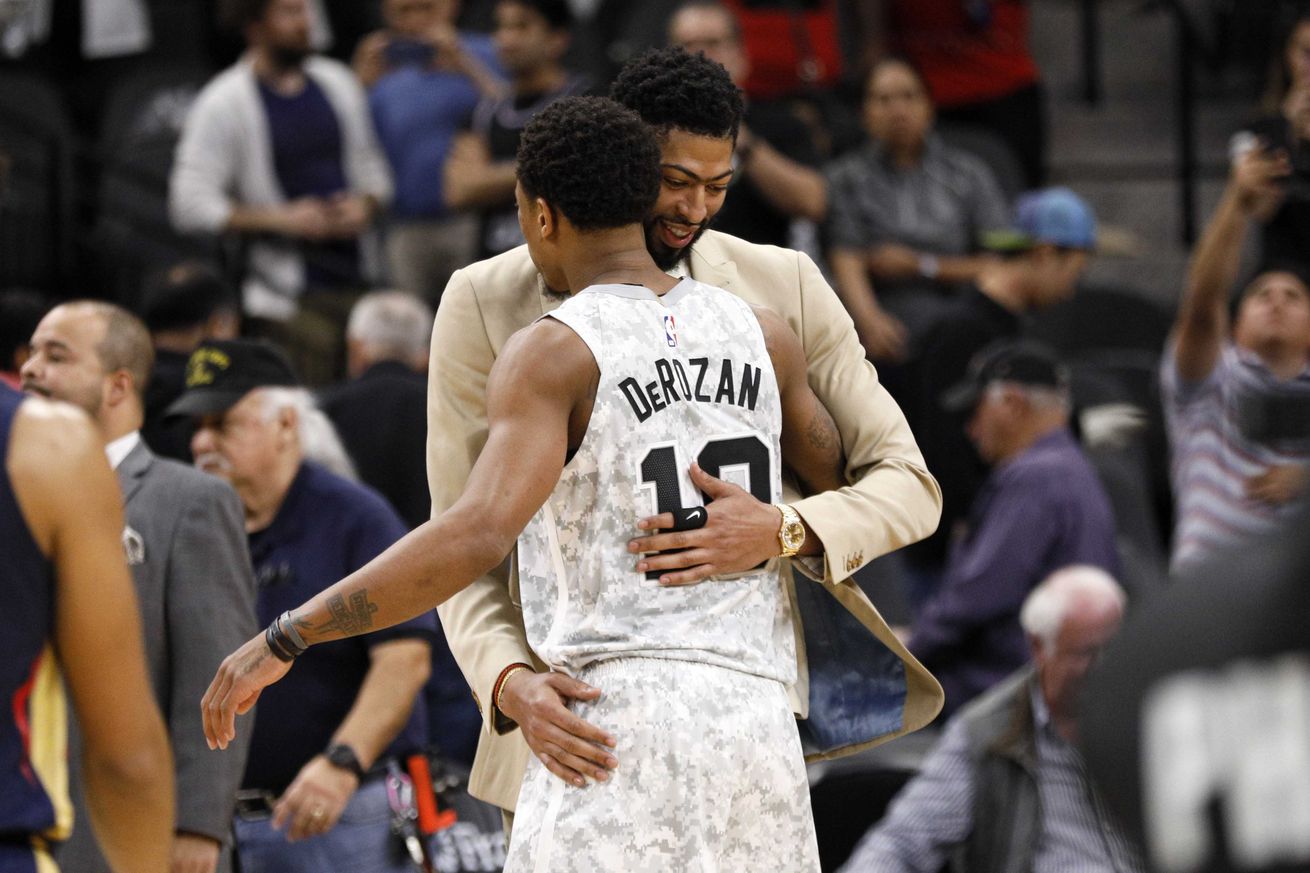 Some tweaks will be in order before these two teams face off again.

Coach Gregg Popovich and the Spurs almost pulled off another magic trick on Sunday night against the Lakers. Sure, they came close to earning a victory, but that’s not the impressive part. The impressive part is that they were close in a game where they purposefully and repeatedly put DeMar DeRozan on Anthony Davis.

It is not an exaggeration to say that there is nobody who believes that’s a good matchup for DeMar. If you were counting out which Spurs defenders you’d rather have on Davis, how many would you get to before him? At least seven, right?

On the other side of the equation, it’s a good bet that watching the Spurs leave DeMar at the 4 when Davis checked in for LeBron James with just under 5 minutes to go in the 2nd quarter left the Lakers at least a little confused. Was Coach Pop trolling them again? Was he not paying attention? Was this a trap?

Spoiler: It was not a trap. The Lakers went straight to AD on their next 2 possessions.

He backed DeMar under the rim and hit an uncontested 2 foot hook on the first and got an easy alley oop dunk on the second when DeMar fronted and had no help over the top. Of course, there really wasn’t any help to be had. LaMarcus Aldridge was defending Dwight Howard up top, and the other three Spurs on the floor were Derrick White, Bryn Forbes and Marco Belinelli, none of whom had a chance of getting to where Davis caught the ball.

Rudy Gay checked in for Bryn Forbes on the next dead ball, pushing DeMar back to the three and ending that particular charade for the time being. Unfortunately, the Lakers recognized they could get that matchup just about anytime they wanted by putting AD into a pick and roll with James. The Spurs switched that action all night, meaning that DeMar, who already had his hands full trying to guard James, ended up on Davis time and again.

The Lakers went to that action throughout the game and ran it on each of their last four halfcourt possessions, generating a putback dunk for Howard, an easy hook for AD and a wide open three from the left wing for Kentavious Caldwell-Pope the first three times.

The fourth was different for a couple of reasons. With less than a minute to go in a two possession game, the Lakers had every incentive to run the clock down and LeBron seemed intent on doing just that. But it doesn’t make a lot of sense to get that specific switch if LeBron’s just going to hold onto the ball and jack up a step back three at the last second. Rudy is a much better defender than DeMar and did a very good job of sticking with him and contesting the shot. If that was the plan, LeBron would’ve been better off to iso from the beginning.

What’s interesting about this play is how the Spurs finally respond to the potential mismatch. LaMarcus, in what appears to be a spur of the moment decision, comes across the lane to grab Davis and sends DeMar over to the weak side to pick up Howard. LeBron bricks his three and the Spurs grab the rebound, getting out into transition and finding as good a look of their own from three as they could hope for. But the result of the play is much less intriguing than the potential implications.

Davis would obviously have a much tougher time attacking LaMarcus, and though the Lakers would have an advantage with DeMar checking Howard, taking advantage of it would disrupt the offense and take the ball out of the hands of two of the best players on the planet. That’s definitely a preferable outcome for the Spurs. It’s unlikely the Spurs could execute that kind of switch with the ball in James’ hands during the normal course of play; he’d exploit any crack of daylight to produce points. But the idea of matching a wing like DeMar up with Howard in certain spots could be a tactic we see again.

As far as Howard goes, he was a critical contributor for the Lakers in this game and a key reason they won. There should be some serious recalibration to how the Spurs approach defending him in their next meeting. For starters, he was 7 of 7 from the field, all from the paint, and his only free throw was an and 1. Howard is a career 57% free throw shooter. There’s no reason for him to get a rebound and be able to go back up for a dunk. The Spurs need to wrap him up and make him earn those points a little.

In the end, though, the Spurs didn’t lose this game solely because they gambled with DeMar on Davis, nor because they let Howard eat on putbacks. They held the Lakers to 98 points per 100 possessions, per Cleaning the Glass, the Silver and Black’s best performance of the season. It could’ve been better, yes, but that’s good enough to earn a W on most nights.