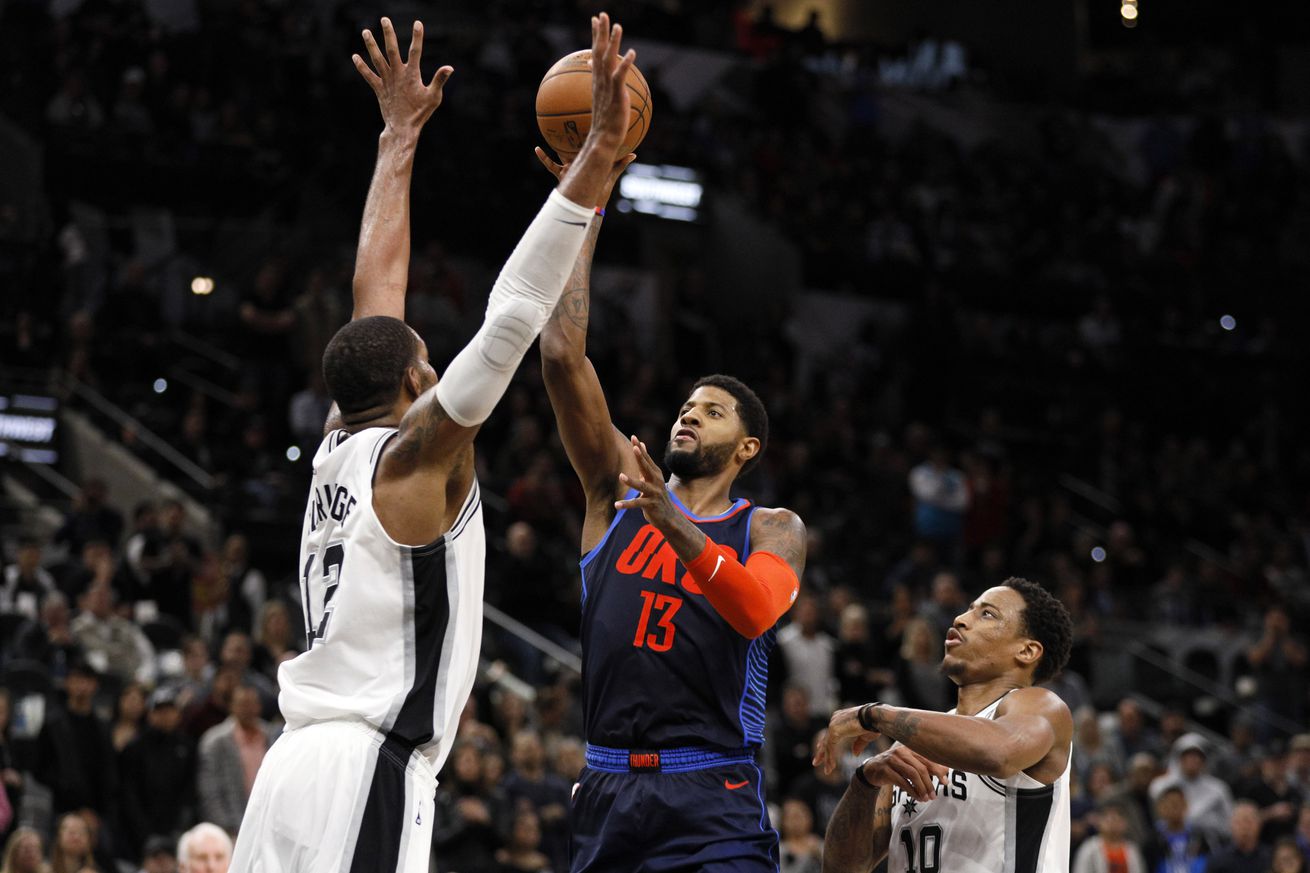 The Spurs pulled out their second SEGABABA win of the season in an incredible double-overtime marathon against the Thunder on Thursday night. Behind a powerhouse performance from LaMarcus Aldridge, they outscored and, more importantly, outlasted an Oklahoma City team with the best defense in the league.

LaMarcus’ performance was remarkable. He made 20 of his 33 shots and hit all 16 of his free throws, and the Spurs needed every last one of them. He did everything but make a three. Here’s a breakdown of all the different ways he scored.

Aside from LaMarcus’ brilliance, 14 straight made threes to start the game, and Derrick White’s 7th or 8th breakout game of the season, there was an interesting lineup adjustment that helped pave the way for the Spurs’ victory.

After Steven Adams came down on his right foot awkwardly with less than six minutes to go in the 4th quarter, the Thunder inserted both Patrick Patterson and Jerami Grant into the lineup. That lasted just 46 seconds, as they quickly realized they didn’t need to match Davis Bertans’ size at the power forward position and could instead play someone with more firepower on the offensive end.

With 4:44 left in regulation, Dennis Schroder checked in for Grant and knocked down a 3 pointer just 6 seconds later, cutting the Spurs lead to 1. The Thunder played that way, with 3 guards – Russell Westbrook, Terrance Ferguson, and Schroder, for the rest of the 4th quarter. The Spurs managed to open the lead back up to 7 thanks to LaMarcus, but it was short lived.

Ferguson’s 2nd triple in the last two minutes tied the game with just 40 seconds to go. Both shots, the 2nd one especially, were the result of defensive mistakes.

While it’s understandable that Davis is concerned about a Westbrook drive here, once he pulls up on the left wing, Davis has to move a step closer to Ferguson. He’s essentially laying off a guy who’s shooting 36.5% from three on the year and who had made 5 of his 6 threes already in this game.

A minute later, Davis did it again, but he wasn’t solely at fault.

LaMarcus could have peeled off and picked up Ferguson on the right wing, but he runs to his man, Grant, who Davis has picked up in the paint. At that point, Davis has to find Ferguson. If Derrick’s even a half step lower, or happens to be looking up when Westbrook makes the pass, this is probably a turnover, but as it is, Ferguson gets an open look to tie the game.

After Derrick put the Spurs back up three with a three of his own, the Thunder called timeout. Patty Mills replaced Davis in the lineup and never checked back out. Marco Belinelli swapped in for Bryn Forbes on the Spurs’ attempt to inbound the ball, which led to a quintessential Marco-centered roller coaster of emotions, but when overtime started, Bryn was back. The Spurs rode that 5-man unit — Patty, Bryn, Derrick, DeMar DeRozan, and LaMarcus — for all but 3 tenths of a second out of the last 10 minutes.

Before Thursday night, those 5 players had only shared the court for 3 minutes, but when it mattered most, Coach Pop trusted them to close it out. Even when Adams checked back in just 1 minute into the first overtime period, Pop stuck with that 4 guard lineup. LaMarcus picked up Adams, and DeMar continued to guard Paul George, while Derrick stuck with Westbrook. That left Patty on Ferguson and the 6’3” Spartan on 6’9” Grant.

The Thunder were intent on attacking with Westbrook and George out of the pick-and-roll with Adams, so Grant’s size advantage was largely irrelevant on that end of the floor. The Thunder didn’t even try to send him to the glass for the most part. The Spurs took advantage by playing a floor spacer who could also handle the ball and create in their secondary offense if need be. Patty wasn’t great, but he did nail a pull-up three late in the shot clock from the left wing after spinning Adams around on his bad ankle.

Still, the first overtime was a wash and the Spurs stuck with the same five players for the next go around. The Thunder, on the other hand, put Schroder back in instead of Adams, likely because of his somewhat limited mobility on that ankle. Now essentially even-sized, the Spurs built another lead, but managed to hold onto it this time, despite some near catastrophic shenanigans at the end.

Pop’s trust in this lineup, even more so than its apparent success, is interesting. DeMar has only played 5% of his minutes at Power Forward this season, per Cleaning the Glass, but the Spurs’ net rating is +13 in that time. Of course, we’re only talking about 138 possessions, which is a little more than 5 quarters of basketball, so it’s not a very large sample size. But it does indicate that there are potential situations, like the end of this game, where it could be a useful option.

Given the myriad of fascinating match-ups in the Western Conference, lineup flexibility will be important in a playoff run. The Spurs have already shown how well they can match up when teams play big, at least when Rudy Gay is healthy. If they are this good when they play small, that represents an incredible amount of flexibility that may help mask their lack of depth on the wing.